Switchback Energy: Always Invest In The Axes And Shovels, Not The Gold (NYSE:SBE)

Switchback is a Special Purpose Acquisition Corporation (SPAC) looking for private target acquisitions to bring public by means of a reverse merger that began trading in July 2019. Switchback is advised by NGP Energy Capital Management which has raised approximately $20bn in capital to invest across 12 private funds into more than 215 companies since 1988. NGP has successfully taken 11 of its portfolio companies public since 2014 and thus has good knowledge not only of private markets but also public markets — which is very important during the de-SPAC and post de-SPAC performance stages. Nearly one year after SBE’s IPO, the SPAC formally announced that it would be combining with electric-vehicle (NYSE:EV) charging network, ChargePoint Incorporated.

ChargePoint was founded in 2007 as an electric vehicle infrastructure company and currently operates the single largest network of EV charging stations in the world with over 114,000 stations in operation across 14 countries including the United States. The company has realized incredible growth rates as they’ve nearly tripled their total locations since June 2017 (35,900) and project another 2.4mm locations added by 2025. As of September 2020, ChargePoint had delivered more than 82 million charges and averaged one plug in about every 2 seconds. Since 2007, ChargePoint has successfully raised $660 million in private markets. The firm boasts a strong pool of investors coming from businesses and funds across oil, gas, utility and venture space that include the likes of Toyota (NYSE: TM), Chevron (NYSE: CVX), Siemens (XETR: SIE), Daimler (XETR: DAI), Quantum Energy and American Power. ChargePoint’s total raise will nearly double after its successful reverse merger with Switchback which will inject another $683 million in fresh capital through cash held in trust and a subsequent PIPE offering. While a lot of ChargePoint’s business comes from selling chargers and offering network subscription services to retail consumers, it also has a large B2B segment as well. Today, nearly 62% of Fortune 50 companies and a whopping 4,000 commercial businesses use ChargePoint.

Why Invest in the Switchback / ChargePoint Reverse Merger

Maybe you missed out on Tesla (NASDAQ: TSLA) and Nio (NYSE: NIO), or perhaps you’ve just never felt comfortable enough to jump on that inexplicable hype wave. Maybe you’re more of an ancillary investor, choosing pickaxes and shovels instead of “mining the gold yourself”. Whatever the reason may be, if you look for investments with strong growth narratives, SBE is worth a deeper look.

According to a recent study by Boston Consulting Group, sales of electrified vehicles, particularly plug-in hybrids and full battery electrics, are growing faster than expected. By 2025, EV sales are now expected to account for ⅓ of all car sales (up from ¼ previously expected) and will surpass sales of traditional internal combustion engines by 2030. Also promising, to meet this increase in demand, traditional and automakers have over 100 electric vehicles in their pipelines for release over the next 3 years. General Motors (NYSE: GM) alone plans to unveil 20 electric cars by 2023.

Currently, Tesla accounts for roughly 80% of EV purchases in America. Tesla also boasts the second largest network of chargers after ChargePoint. However, while Tesla vehicles can use any charger, only Tesla vehicles can use Tesla’s network of chargers. With this in mind, and the fact that Tesla’s pipeline of upcoming vehicles accounts for less than 10% of all releases in the next three years, their network should not be considered a direct competitor. 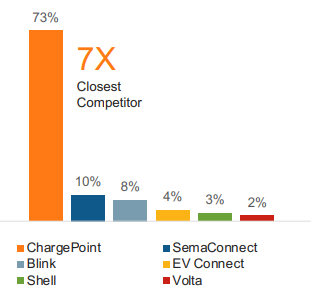 ChargePoint’s merger deal with Switchback valued them at $2.4bn pre-money. Current valuation based on SBE closing price of $14.85 and 304.9mn shares outstanding is just over $4.5bn. I’d like to consider two valuation approaches, one I like to call the blind logic approach and another more traditional P/S benchmarking approach.

The blind-logic approach, in my opinion, is arguably the surest investment strategy. It revolves around asking the simple question, based on the current market environment and likely trends, “what makes sense?” My grandfather gave me my first investment advice, “invest in what you know,” and as the years have gone by, I’ve come to fuse this and “what makes sense?” into what I call the ‘blind-logic’ approach. The ‘blind-logic’ approach has yielded my highest returns throughout my career, but it often doesn’t help convince others without some numerical backing. That said, if I relied strictly on a fundamental/numerical approach, I wouldn’t have invested heavily in Apple at $0.40 back in December 2001 a couple months after they released this innovative new device called the iPod. In this case, Apple and the iPod release is a great example of the blind-logic approach. Fundamentally speaking, Apple was not an incredible stock in 2001, by any stretch of the imagination. However, the second I picked up that first iPod, I immediately realized “goodbye Walkman, goodbye Discman, this is the future.” Now granted, I didn’t expect Apple to become what it was today, but the iPod was a great indicator of good things to come. My blind-logic approach has led me to invest in Google at $60 in 2004, Netflix at $12 in 2012, Facebook at $20 in 2012, Amazon at $200 in 2012 and CRSP at $20 in 2017, among a slew of others.

READ ALSO  Whose Great Reset? The Fight For Our Future – Technocracy Vs. The Republic

What do all of these purchase decisions have in common? In answering the “what makes sense?” question, I immediately thought “this is the future” for each of the aforementioned purchases. When I think about ChargePoint today, sure there are uncertainties, but for all intents and purposes I can’t find a scenario where an electrified future doesn’t make sense, it seems all but inevitable, this is the future. It is likewise inevitable that the marketplace will crowd and be more competitive with time, but I simply look toward gas stations for reassurance; how often do you pull up to a 4-way intersection and there are 4 different gas stations, one on each corner? I simply don’t see a future where EV charging stations are not more prevalent than they are today.

Now for the more fundamental and numerically dirven investors, I present two scenarios, an upside short term and an upside long term. For the short term upside, I look at the potential for ChargePoint to realize the current EV tailwinds across the marketplace. In doing so I’d like to highlight the price-to-sales ratio (P/S) of its closest publicly traded competitor, Blink (NASDAQ: BLNK).

I like to use these metrics as a gauge of public sentiment toward a stock, and in this case a market sector/industry as there is only one other publicly traded EV charging network. Now while it is impossible to know if ChargePoint will match Blink’s outrageously high P/S, it does paint a picture for some substantial upside in the short term as investors may look toward the more reputable and larger ChargePoint with the same frothy appetite as they have Blink. With this pseudo market-sentiment short term strategy, it would seem to indicate the potential for at least a 50% upside in the short term once the deal has closed.

For a more longer term fundamental approach, I look toward ChargePoints projections highlighted in SBE’s investor presentation from September. SBE indicates that ChargePoint projects compounded annual growth rates of 60% over the next 7 years, exceeding $2bn in revenue by 2027. At those revenues, if we extrapolate P/S and prescribe three benchmarks, ChargePoint’s current P/S ratio of 33.75, Tesla’s current P/S ratio of 17.06 and Apple’s (NASDAQ: AAPL) current P/S ratio of 7.90 we come up with $221, $112 and $52 respectively.

Any one of these approaches alone is not great to rely on, but in combination, it certainly paints a picture, with a high degree of likelihood, that ChargePoint is currently quite cheap and will enjoy strong upside as a long term equity position.

While a majority of its sales currently come from hardware, ChargePoint plans to significantly ramp up revenue generation from its other key sectors like recurring software and services (which it expects to account for nearly half of its revenue within 6 years). Not only will this shift improve margins, it will also likely make it even more attractive to investors as they search for more high growth firms with a subscription component within their models. These points coupled with a cheap price, the inevitable fact that EV is only growing by the year and firmly here to stay, and a repeated history of capturing and retaining strong market share, make ChargePoint an attractive long term buy and hold. Alternatively, if you are looking to get fancy, are a little more risk adverse, or aren’t completely sold, this seems like a great scenario to build a hedge by holding some type of short position on Blink and a long position on ChargePoint. That said, I’d keep it safe and simple, after all, if it makes sense, it’s bound to go up with time.

Thanks for reading! If you liked this article, please scroll up and click “Follow” next to my name to receive future updates.