Sweden’s pandemic no longer stands out

Sweden is no longer the outlier it used to be on coronavirus. It no longer has the least restrictive approach to the pandemic in Europe and it has lost its briefly held status as the country with the highest number of deaths per capita after its number of Covid-19 cases decreased over the summer. Its economy has suffered less than the European average in recent months, but at least as much and possibly more than its Nordic neighbours.

“We get a second chance. We don’t want this to take off again. We now have the chance to learn and do additional things to avoid things taking off,” said Cecilia Soderberg-Nauclér, a critic of Sweden’s approach and a professor of cell and molecular immunology at Karolinska University Hospital in Stockholm.

The debate about the wisdom of Sweden’s lighter-touch strategy on the pandemic is as fierce as it has ever been, but the situation on the ground has calmed during its main summer month of June.

The number of cases per capita fell by 86 per cent in the month from the end of June, although they have risen slightly in recent days and are still relatively high by European standards.

“A slight increase during the [autumn] is more or less inevitable. We do not really believe that we are going to have a constant rise and get up to the same levels we had this spring,” said Anders Tegnell, Sweden’s state epidemiologist.

The reasons for the decline are far from established. Mr Tegnell argued “there is a relationship between the very quick drop of the last few weeks and the increasing immunity in many parts of Sweden”. Swedish public health authorities have estimated the capital Stockholm could be getting close to “herd immunity”, but their argument is fiercely disputed by other epidemiologists.

Instead, the latter argue much of the recent decline has to do with the fact that Sweden all but closes down for a month after the midsummer holiday at the end of June. Lena Einhorn, a virologist and prominent critic of Sweden’s strategy, argued that results of antibody tests suggest the country remained some distance from herd immunity — where so many people are infected that the virus stops spreading.

“We are really worried about the autumn. We don’t believe we can count on herd immunity. If Sweden doesn’t change its policy, we won’t see the same thing — because the elderly are better protected — but the numbers will go up,” she said.

She added Sweden needed to stop bucking the international trend in two areas in particular: refusing to order the mandatory use of face masks; and failing to put all known contacts of infected people into quarantine.

Sweden’s death rate has also fallen steadily in recent months, dropping from more than 100 a day in mid-April to about 1 each day in the past week. At one stage in the pandemic in mid to late May, Sweden had more deaths relative to the size of its population than any other country but has since been overtaken in Europe by the UK and by several South American countries as well as the US.

Its no-lockdown approach also stands out less. According to the University of Oxford’s government response tracker, countries from France, Austria and Croatia to Norway and Finland now all have fewer restrictions than Sweden. Norway, which has a death rate per capita 20 times smaller than Sweden’s, locked down early but has since reopened its school system fully, although it warned last week that more restrictions were likely.

On the economy, Sweden suffered its deepest quarterly contraction between April and June since the second world war but most economists agree it would have been even worse had it locked down. How strong that benefit is can be debated: compared with the EU average, Sweden’s second-quarter GDP figures were better — an 8.6 per cent fall versus 11.9 per cent for the EU.

But, as Robert Bergqvist, chief economist at bank SEB points out, Sweden is less dependent on tourism than many countries that have done worse such as France, Italy and Spain. Sweden’s economy is currently expected to decline by about 4-5 per cent this year, about the same as estimates for Denmark and Norway, both of which locked down.

“It’s too early to draw any conclusions from our strategy. We have to wait until the second half,” said Mr Bergqvist. He added he remained worried about a resurgence of Covid-19 in the rest of Europe, which in turn would hit export-dependent Sweden. “If you have problems in Europe, you will have problems in Sweden,” he said. 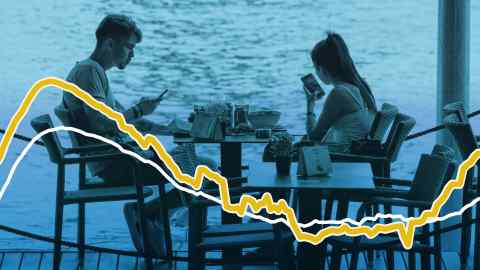 As in the rest of Europe, much rides on how well the autumn goes in Sweden. Ms Soderberg-Naucler is worried about all schools — including those for 16-18 year-olds, which were closed from March until June — reopening at the same time, especially after antibody tests in the Swedish city of Uppsala showed that 10 to 19-year-olds had the highest percentage of positive results, 29 per cent versus 12 per cent for the general population.

Ms Einhorn said Sweden’s infection and death numbers still remained “very high” compared with its Nordic neighbours and urged it to take a tougher approach. “We have a golden opportunity to change course and can still do much to prevent a second wave. But we’re so far not taking it, and that is worrying,” she added.