Sweden’s economy performed better than most of Europe at the height of the pandemic even though its economy shrank by the most since the second world war, as the Scandinavian country appeared to benefit from its lighter-touch approach to coronavirus.

Gross domestic product in the second quarter fell 8.6 per cent compared with the previous three months, according to a flash estimate from Statistics Sweden published on Wednesday. But that was significantly better than the 12 per cent contraction experienced across the eurozone in the same period.

The hardest-hit major European economy was Spain, which logged an 18 per cent contraction; the German economy shrank by about a tenth.

Sweden has been at the centre of a fierce international debate about the merits of locking down as a means of tackling the spread of the virus. It refused to follow the rest of Europe into a formal shutdown, keeping its schools, restaurants and borders open while urging people to work from home and keep a distance from each other.

After being one of the very few European countries to eke out positive growth in the first quarter, Sweden continued to be an outlier in April, May and June — the peak of the pandemic so far in Europe. According to flash estimates last week, only Latvia and Lithuania performed better with GDP declines in the second quarter of 7.5 per cent and 5.1 per cent respectively.

David Oxley, senior Europe economist at Capital Economics, said the contraction showed Sweden was not “immune to Covid”. He added: “Nonetheless, the economic crunch over the first half of the year is in a different league entirely to the horror shows elsewhere in Europe.” 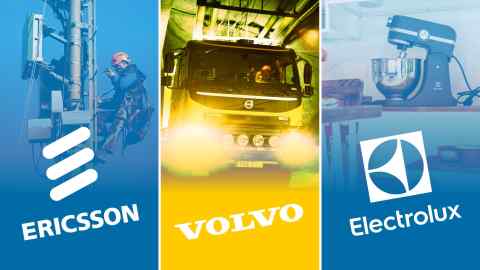 Economists expect Sweden’s economy to shrink by about 4 to 5 per cent this year — better than the forecasts for the eurozone and its major economies, but in line with estimates for neighbouring Denmark and Norway, both of whom locked down.

On Wednesday economists at Swedish lender SEB upgraded their forecast for Sweden’s GDP this year to a fall of 4 per cent, from 5 per cent previously.

“It is too early to evaluate how different strategies to deal with Covid-19 have affected the economies,” said Torbjorn Isaksson, chief analyst at Nordea.

Sweden’s central bank has kept its main interest rate at zero after raising it at the end of last year, arguing that monetary policy is not the best response to tackle the fallout from coronavirus.