Sweden has unveiled tougher restrictions to fight coronavirus as Europe’s outlier on Covid-19 is forced to step up measures to fight the virus as it faces surging numbers of cases and deaths.

Warning that the situation was “going to get worse”, Prime Minister Stefan Lofven said on Monday the limit on public gatherings in Sweden would be cut from 50 people to eight.

“It is a clear and sharp signal to every person in our country as to what applies in the future. Don’t go to the gym, don’t go the library, don’t have dinner out, don’t have parties — cancel!” Mr Lofven told a press conference.

Sweden has stood out from the rest of Europe by refusing to order a legal lockdown and instead preferring to rely on recommendations to people to wash their hands, keep a distance, and work from home.

The country’s health authorities said in the spring that Sweden was unlikely to be hit by a second wave as it suffered more deaths than its Nordic neighbours in the first wave. But Sweden’s cases per capita, hospitalisations and deaths are all increasing rapidly now.

Mr Lofven called the ban on large public gatherings a “new normal”. He added: “Advice and recommendations went a long way this spring, but now compliance [with them] is lower. Now more of a ban is needed to bring down the curve of the number infected.”

The new ban applies to public gatherings such as concerts, lectures and theatre performances, but not to private gatherings. Sweden last week banned the serving of alcohol after 10pm, and now has special local recommendations such as to avoid public transport or shops in nearly the entire country.

Most of its response against Covid-19 has been based on recommendations to the public, which have produced what its state epidemiologist Anders Tegnell has described as a de facto lockdown with people cutting travel and social contact significantly.

But Sara Byfors, an expert at the Swedish public health agency, conceded to the Financial Times last week that authorities did not know why Sweden and other European countries that were hit hardest in the first wave were also facing the most pressure now. 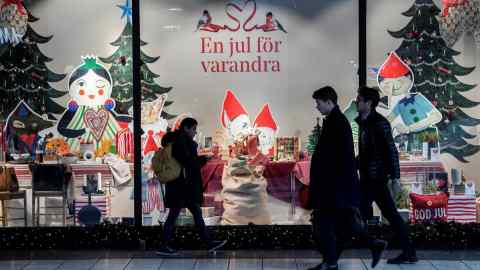 Sweden’s cases per capita are currently 10 times higher than Finland and four times higher than Norway. Last week, the rate at which people were being admitted into hospital was growing faster in Sweden than any other European country. And after several months of relatively low numbers of deaths, Sweden reported more than 100 in three days last week.

Mr Lofven struck a solemn tone on Monday, twice telling Swedes: “This is a testing time. It is about your and my choices every day, every hour, every moment that will determine how we manage this. So make the right choice for yourself, for society, and for Sweden.”

Asked by the Financial Times why Sweden did not introduce a lockdown, Mr Lofven replied: “We don’t believe in a total lockdown. We believe that the measures we are taking are appropriate.” He added the “tough” measures were the most invasive in Sweden in “modern times” and sent a clear message to the public on the need for social distancing.