SVMK Inc. (SVMK) (SurveyMonkey) is one of the cloud software names we have liked for some time. Having been in the business for over 20 years, the company went through a period of accelerated growth in the 2010s, upon the acquisition of Bain Capital and the appointment of the late Dave Goldberg as the CEO. In the next few years, it raised growth financing from several top-tier VC/PE funds such as Google Capital (GOOG) (NASDAQ:GOOGL) and Tiger Global, which valued the company at over $1 billion.

The business has established a solid brand reputation in the online survey market, driven by the combination of its highly efficient self-serve go-to-market and high-quality freemium business model. As one of its users as well, we found the offering to be flexible and easy to use. Furthermore, as the company has been gaining traction in the enterprise segment in recent times, the growth story has also become more interesting. As such, we maintain our bullish view in the stock.

The company’s resilience business model, efficient go-to-market, and brand reputation serve as the long-term catalysts for the stock. In our view, the combination of all those factors has allowed the company to have strong fundamentals and a deep moat in the online survey industry. Driven by such solid foundational building blocks, we see various growth opportunities the company can easily unlock in the future.

As the company aims to dig deeper into the enterprise segment as a future growth opportunity, the execution has exceeded our expectations so far. In only a year, enterprise customers have grown by 75% to 6,800 as the enterprise segment making up almost 30% of the revenue. We also expect the enterprise’s contribution to overall revenue to increase in the future, due to the strategic partnership and alliance with Microsoft (MSFT) and Salesforce (CRM). The partnership with Microsoft will involve SurveyMonkey attaching its survey offering to Teams and Power BI. Likewise, SurveyMonkey will integrate its Usabilla and GetFeedback businesses to launch a CX (Customer Experience) offering with direct integration to Salesforce CRM. 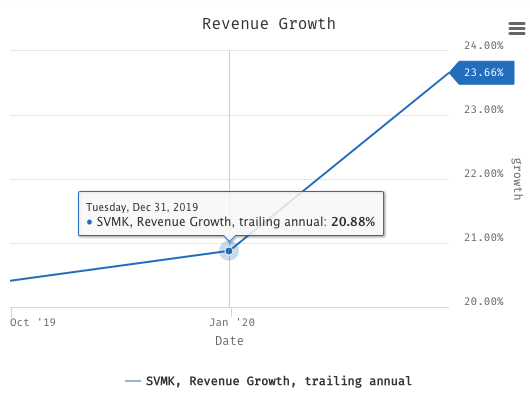 Driven by the company’s freemium and self-serve onboarding model, which plays an important role in evangelizing the offering through word-of-mouth marketing, growth has even accelerated during the COVID-19 outbreak. The overall revenue growth of 29% YoY in Q1 is already higher than the average +20% YoY growth in the last two years. In particular, the adoption of the CX solution was solid as the company landed e-commerce and logistics customers such as Puma and DHL in Q1.

Moreover, the self-serve model, which has been the company’s core go-to-market approach, will continue to improve cash flow generation and profitability. Over the last two years, FCF (free cash flow) generation has been steady and healthy due to the company’s strong recurring revenue base, while gross margin also expanded by over 600 bps due to the frictionless onboarding. As of Q1, subscription revenue made up 90% of the overall revenue while 85% of the paying users are on annual subscriptions.

In our view, the mission criticality of an online survey tool has always been lower than other cloud-based business tools like CRM or BI. When the company planned to enter the enterprise segment a while back, this was our key concern. Moreover, we also believe that SurveyMonkey has lower brand awareness in the enterprise than in the mass market.

Over the last few years, the company has also done some acquisitions and restructuring to strengthen its enterprise positioning. The workaround, which involved the removal of its SurveyMonkey Audience from the offering, also effectively slowed down the company’s growth.

At ~8x P/S, SurveyMonkey is a bargain. The business has a strong brand name, high-quality business model, and efficient go-to-market. In the last twelve months, shares have appreciated by ~17%. While the long-term upside in SurveyMonkey is very clear, we also think that the company can potentially trade at a higher premium in the near term as enterprise adoptions trend higher.

Medallia’s (MDLA) enterprise client base, which consists of mostly Global 2000 businesses, may be the only reason why the business trades at a higher premium at ~9.6x P/S. Medallia is pretty much in a similar business to SurveyMonkey, though it has traditionally been an enterprise-focus company. Despite the slightly faster growth than SurveyMonkey, Medallia is still unprofitable in terms of FCF.

Disclosure: I am/we are long SVMK. I wrote this article myself, and it expresses my own opinions. I am not receiving compensation for it (other than from Seeking Alpha). I have no business relationship with any company whose stock is mentioned in this article.