I last wrote about Supremex (OTCPK:SUMXF, SXP.TO) back in January 2019. While the price of this micro-cap company has declined 46% since then (35.5% total return including dividends), I have not lost faith, but have perhaps become more interested. At a 5.2x trailing twelve-month (NYSE:TTM) P/E, the business is looking even cheaper than the 7.4x TTM P/E back in January 2019, and contrary to the recent share price decline, the business is still looking solid. After releasing strong Q3 2020 results on November 13, the company’s shares had a nice spike of 14%, and more of a recovery might be in store.

Supremex is an old cash cow that originated from the now declining industry of envelopes but has recently been expanding into the growing packaging industry in the past decade using excess cash flows and some incremental debt capital. However, with a market cap of only CAD 41.1 million (all $ figures in CAD), this micro-cap company might not be right for every investor’s portfolio risk tolerance and liquidity. This article will discuss Supremex’s recent and historical business characteristics, while taking a look at the current valuation.

Hit Hard During the Pandemic?

In recently reported Q3 2020 results, Supremex reported that total revenue increased by 10.4% to $49.9 million, from $45.2 million in the third quarter of 2019 due to a combination of the Royal Envelope acquisition, sustained growth in the U.S. Envelope business and growing e-commerce packaging sales. Net earnings also increased to $2.7 million ($0.10/share), from $1.2 million ($0.04/share) in the third quarter of 2019.

These strong quarterly and YTD results during the pandemic look out of line with the decrease in Supremex share price.

What about the Dividend Cut?

On May 15, 2020, the company suspended its CAD 0.065 quarterly dividend due to the pandemic, which was yielding a generous 10.9% prior to the pandemic in January 2020, when the share price was around $2.40. However, Supremex management and the board have continued to return cash to shareholders through opportunistic share repurchases at the recent lower share price. In August 2020, they announced the renewal of the company’s normal course issuer bid (NCIB) after its approval by the TSX, to purchase for cancellation, up to 1,406,523 of its common shares, representing approximately 5.0% of outstanding shares.

These types of share repurchases were the norm before the pandemic, with the company repurchasing on average 0.4% of its outstanding shares each year since 2007. It is great to see Supremex taking advantage of its low share price to continue returning cash to shareholders during this time… albeit with the dividend still suspended.

A Cash Cow of a Business

Supremex has had a rough decade, with the decline in its envelope business leading to massive goodwill impairments in 2008, 2009, and 2012 of $148.3M, $43.0M, and $28.9M, respectively. That being said, the company has not had a single year of negative free cash flow (FCF) after accounting for capital expenditures and only one year in 2017 of negative FCF when one includes acquisitions, as can be seen in the graph below. 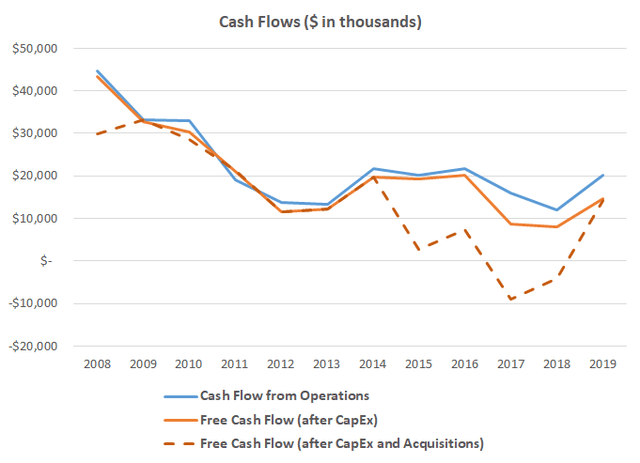 Supremex saw large declines in FCF during the first five years of the past decade. However, this trend looks like it has stabilized since 2012, as the company has plowed money into the packaging business. Much of the recent acquisitions have been sustainably financed by cash flow from operations, as indicated through the graph of FCF above only passing into the negative in 2017 due to its large $17.5 million acquisition of Stuart Packaging. Given how important acquisitions have been in the recent business model of Supremex, any valuation would need to take these acquisitions into account.

The secular decline in the envelope business has led to a rough early decade for Supremex’s net income, as given the decline in cash flows, assets have had to be impaired, as noted earlier, due to a reduction in profitability. On that note, the company recorded large net income losses in those years, as seen in the graph below. 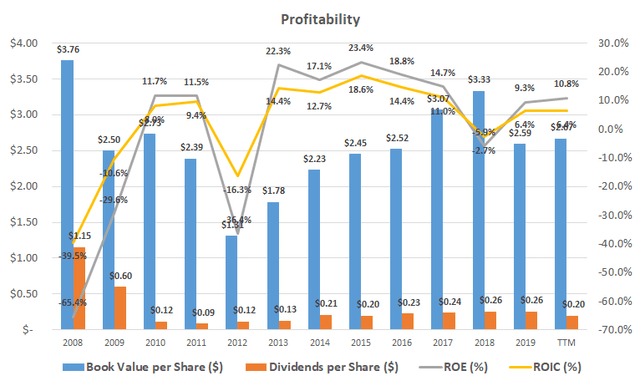 How is the Debt?

Since 2008, financial leverage has bounced around, but is definitely increasing in the latest years from lows of 1.61x reached in 2016 to be around 2.62x currently. Interest coverage based on operating income, and interest currently is a decent 5.0x based on the nine-month period ended September 30, 2020. As at the latest Q3 report, the company was in compliance with its banking covenants and had an additional borrowing capacity of $29.9 million under covenants. These financial leverage ratios should continue to give Supremex flexibility as it adapts to its changing business environment. 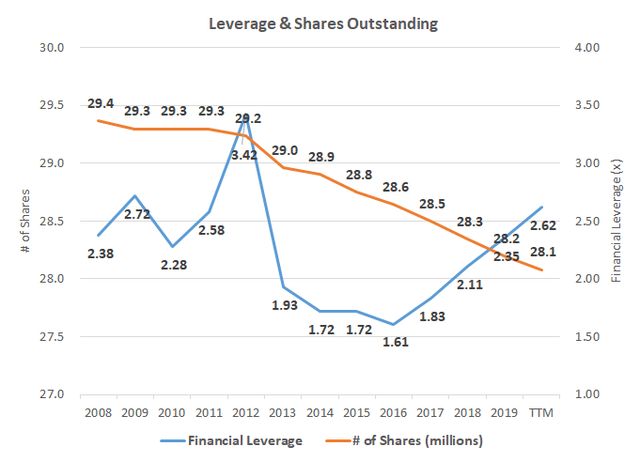 Getting a Sense of Valuation

To get a sense of valuation, I have calculated zero growth intrinsic value using the average free cash flows of the last 7 years (pre-COVID-19), along with a standard 9% discount rate. Acquisitions have been included to reflect them as part of Supremex’s latest business strategy to diversify the business but only included at 25%, as I do not expect these acquisitions will not continue indefinitely, and zero growth has been attributed to them going forward. As can be seen from the calculations below, I have estimated the company’s intrinsic value to be $3.88 per share, which gives a solid 62% margin of safety to the current $1.47 per share price. 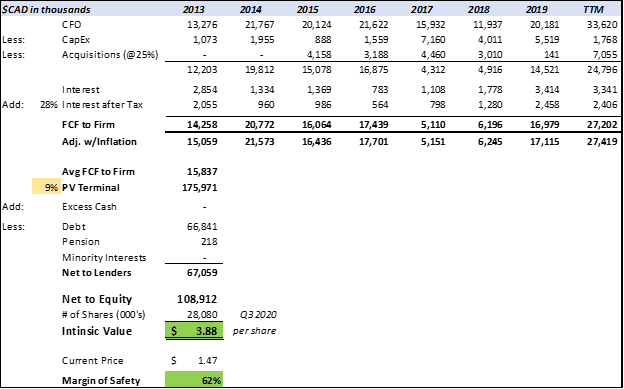 The envelope part of Supremex’s business is in secular decline, and even if management is aware and working to diversify the company, the speed and depth of the decline is out of management’s control. Acquisitions in the packaging industry come with their own risks of execution and valuation, with the potential for further asset impairment charges in the future if the new businesses do not work out as planned.

Supremex is an old cash cow still with the majority market share of Canada’s envelope business. Management is well-aware of the secular decline in the envelope business and is doing its best to redirect cash flows into the growing packaging business. The business still looks to be healthily financed, with financial leverage of 2.62x and interest coverage currently around a healthy 5.0x. With the shares currently valued at 5.2x TTM P/E, the company looks to be a great opportunity for value hunters, in my opinion.

Disclosure: I am/we are long SXP. I wrote this article myself, and it expresses my own opinions. I am not receiving compensation for it (other than from Seeking Alpha). I have no business relationship with any company whose stock is mentioned in this article.

Additional disclosure: I am long SXP.TO with an average cost base of $2.81.

Disclaimer: While the information and data presented in my articles are obtained from company documents and/or sources believed to be reliable, they have not been independently verified. The material is intended only as general information for your convenience, and should not in any way be construed as investment advice. I advise readers to conduct their own independent research to build their own independent opinions and/or consult a qualified investment advisor before making any investment decisions. I explicitly disclaim any liability that may arise from investment decisions you make based on my articles.