Supreme Court vacancy reignites debate over abortion in US

The death of Ruth Bader Ginsburg has reignited the abortion debate in the US, putting the issue front and centre with less than six weeks to go until November’s presidential election.

Donald Trump has vowed to replace Ginsburg, a liberal pro-choice icon, with a female jurist committed to overturning Roe vs Wade, the landmark 1973 Supreme Court decision that enshrined the constitutional right to an abortion.

The president will announce his choice at the White House on Saturday. The nominee, Mr Trump’s third since taking office, stands to tip the balance of the nine-member bench 6-3 in favour of conservatives. The shift would also be a big victory for the so-called pro-life, or anti-abortion, lobby that helped carry Mr Trump to victory in 2016.

Activists on both sides say the vacancy has raised the temperature of an already fiery debate and is likely to increase the number of votes cast on polling day.

Johanna Schoen, a Rutgers University professor and expert in the history of reproductive rights, said while abortion had historically been the “easiest way to rally conservative voters”, Ginsburg’s death was also likely to motivate liberals in this election.

“People are now bringing up this term culture war again, and for the first time I think that is actually applicable,” she said.

Conservatives are keen to boost their numbers on the court, especially after chief justice John Roberts, a George W Bush appointee, sided with his liberal colleagues earlier this year in striking down a restrictive abortion law in Louisiana.

Amy Coney Barrett, a federal judge and former professor at Notre Dame Law School, is considered to be the frontrunner to replace Ginsburg. Judge Barrett, a Roman Catholic and mother of seven, has never ruled directly on an abortion rights case, but is favoured by anti-abortion groups including the Susan B Anthony List and the Family Research Council for her conservative credentials.

The president, who has been married three times and once described himself as pro-choice, has become an unlikely ally of social conservatives, especially anti-abortion evangelicals who are buoyed by his unwavering support for overturning Roe vs Wade.

Scrapping it would not outlaw abortions in the US, but it would give Congress and states the ability to regulate or ban the procedures, something that liberal activists say would be a devastating step backward for women’s rights.

Mallory Quigley, vice-president of communications for the Susan B Anthony List, an anti-abortion group, said the installation of another Trump appointee before polling day would reaffirm activists’ support for the president heading into November.

“Seeing a pro-life justice confirmed just ahead of the election will strengthen in voters’ minds what pro-life politics is all about,” she said. “We put these people in office so that they can carry out policies that they campaign on. President Trump has been the most pro-life president ever.”

At the same time, pro-choice groups, who oppose abortion restrictions, say the Ginsburg vacancy has galvanised their supporters, who are devastated by the justice’s death and panicked over the seemingly inevitable nomination of a conservative replacement.

Planned Parenthood Votes, the election arm of the healthcare and abortion provider, said it would spend $45m on this year’s election cycle. In the 72 hours after Ginsburg’s death last Friday, the group signed up three times as many volunteers as it would have in an ordinary weekend, and has since rolled out new adverts in key battleground states, including Pennsylvania, Arizona and Florida.

READ ALSO  Leon Black on Epstein links: ‘Any suggestion of blackmail is . . . untrue’

“This vacancy has really put [abortion access] at the top of mind for voters,” said Tess Whittlesey, Planned Parenthood Votes spokesperson. “Our supporters are already motivated. But this lights a bigger fire beneath them.”

Abortion has long been a lightning rod in the US, but unlike other issues including gay marriage, public opinion has remained remarkably consistent. According to Gallup, just 20 per cent of Americans say it should be “illegal in all circumstances” — virtually unchanged from the 1970s.

Republicans and Democrats have nevertheless hardened their positions on the topic. 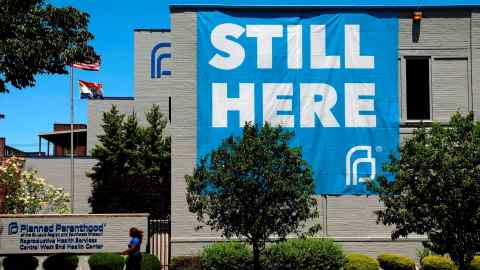 Joe Biden, Mr Trump’s Democratic challenger, last year dropped his longstanding support for the Hyde Amendment, which bans the use of federal funding for abortions. Mr Biden, a practising Roman Catholic who attends church regularly, had been a holdout in his own party.

Even before Ginsburg’s death, abortion was widely seen as a significant motivation for voters. Forty per cent of registered voters said abortion was “very important” to their vote in the presidential election, according to a Pew poll published in mid-August.

Trump supporters say any of the women on the president’s shortlist will shore up his evangelical and Catholic support in key swing states in the industrial Midwest, as well as Arizona, which has a relatively large Mormon population.

Ford O’Connell, a Republican strategist who is close to the Trump campaign, said that voters in places like Pittsburgh, Pennsylvania, and Charlotte, North Carolina, were more socially conservative than their counterparts in coastal cities like New York or San Francisco.

“The states that are going to decide this election tend to be much more pro-life than the nation as a whole,” he said.

Mr O’Connell added that if Democratic lawmakers were too aggressive in questioning Judge Barrett or others, they risked losing support among suburban women.

“If they attack a female nominee for her faith or stance on abortion, that could backfire,” he said.

Previous Postbluebird bio Should Be On Your Radar With Multiple Catalysts Expected This Year And 2021 (NASDAQ:BLUE)Next PostKim Jong-un ‘very sorry’ over North Korea’s shooting of missing South Korean official – Seoul