As chairman of the Senate judiciary committee in the late 1980s and early 1990s, Joe Biden oversaw the confirmation hearings of six Supreme Court nominees, including Ruth Bader Ginsburg in 1993.

Almost three decades later, Ginsburg’s death at the age of 87 stands to complicate Mr Biden’s bid for the White House.

The vacancy created by Ginsburg’s passing on Friday has galvanised the Democratic base, with Act Blue, the fundraising platform, reporting that a record $100m was raised by Monday morning. But it also poses challenges for Mr Biden, who has sought to satisfy progressives while also appealing to centrist Democrats, independents and some Republicans.

Mr Biden, who leads in national opinion polls, has so far been reluctant to wade into the bitter debate in Washington over Ginsburg’s successor. In a campaign speech on Monday in Wisconsin, he made no mention of Ginsburg. Nor has he identified judges that he would nominate if there is still a vacancy after he is elected.

Instead, Mr Biden appears to be sticking to his strategy of trying to cast the election in six weeks as a referendum on Donald Trump’s presidency, in particular his handling of a pandemic that has killed 200,000 Americans and put tens of millions out of work.

Civil rights and reproductive rights mobilise the Democratic base, but Biden is also running a campaign where he is looking at winning the middle

In contrast, with polls tightening in several key battleground states, Mr Trump’s team has put the Supreme Court vacancy at the centre of its campaign. The president was greeted by supporters chanting “fill the seat” at a rally in Ohio on Monday night.

READ ALSO  The character of US democracy is on the ballot

“Civil rights and reproductive rights, that mobilises the base . . . that is important for Biden,” said Lara Brown, a political science professor at the George Washington University. “But the reality is Biden is also running a campaign where he is looking at winning the middle and persuading those independents to stay with him.”

Mr Biden, who has campaigned on his ability to reach across the political aisle, has appealed to Republican senators to “follow your conscience” when deciding whether or not to vote for a replacement before the election.

But with the Republicans controlling the upper chamber and just two of the party’s senators — Susan Collins of Maine and Lisa Murkowski of Alaska — saying they oppose efforts to press ahead with a confirmation process before November 3, it looks all but certain that a third Trump appointee will be added to the nine-member court before the end of the year. That would tip the balance on the court to 6-3 in favour of conservatives.

Mr Trump has claimed that if Mr Biden is elected, he would “pack” the court with “far-left radicals”, picking up on calls from some Democratic lawmakers who have threatened to expand the size of the Supreme Court and add more liberal judges if they take control of the Senate after November.

However, Mr Biden has distanced himself from “court packing” supporters, telling a local television station in Wisconsin on Monday that taking a position on the issue would “shift the focus” of the election.

“That’s what [Mr Trump] wants, he never wants to talk about the issue at hand, and he always tries to change the subject,” Mr Biden said. “Let’s say I answer that question, then the whole debate’s going to be about what [I] said or didn’t say.”

Rather than emphasise issues traditionally associated with the court, such as abortion or gun control, the Biden campaign has sought to revive its central message about Americans’ access to healthcare during and after the pandemic. Democrats have had success in campaigning on healthcare-related issues before, most recently in the 2018 midterm elections.

The Supreme Court will hear a Republican-led case seeking to scrap the Affordable Care Act, or “Obamacare”, shortly after election day. Mr Trump has vowed to get rid of the ACA, which includes a provision that prevents insurers from denying people healthcare based on pre-existing conditions.

“Millions of Americans are voting because they know their healthcare hangs in the balance,” Mr Biden said on Sunday. “In the middle of the worst global health crisis in living memory, Donald Trump is before the Supreme Court, trying to strip healthcare coverage away from tens of millions of families.”

Professor Brown said the focus on healthcare was “savvy”, especially given how many Americans have lost their jobs and employer-sponsored health insurance due to Covid-19.

“We are in a pandemic, and pre-existing conditions may be struck from the law if this court and this president are able to go forward,” Prof Brown added. 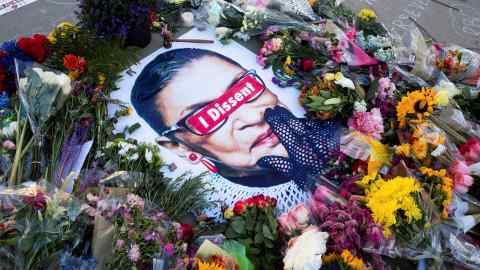 Kyle Kondik of the University of Virginia Center for Politics agreed, noting healthcare may resonate in states such as Pennsylvania, Michigan and Wisconsin, where Mr Trump won by narrow margins in 2016.

“A lot of the voters that Biden is trying to appeal to are in the industrial North. They may be culturally conservative but economically more moderate or liberal,” he said. “Reaching out to those voters on a healthcare message as opposed to [an] abortion message might actually be a little more effective.”

Republicans, including Mr Trump, have vowed to appoint judges who favour scrapping Roe vs Wade, the landmark 1973 decision enshrining a constitutional right to an abortion. According to Gallup, just 20 per cent of Americans think abortion should be illegal “in all circumstances”.

Prof Brown said the Supreme Court vacancy was likely to motivate younger, left-leaning voters who are lukewarm about Mr Biden, who has rejected some of the progressive policies espoused by Bernie Sanders, his chief opponent during the Democratic primaries, including a Medicare for All proposal that would effectively eliminate private health insurance.

“The Biden campaign is able to look at [progressives] and say, hey folks, I get that you want Medicare for All. But guess what? If you allow another conservative justice on this court, we’re not even going to have ACA,” she said.