Rishi Sunak has paved the way for big tax rises in the spring, warning that this week’s spending review would include forecasts laying bare “the scale of the economic shock” caused by the Covid-19 crisis.

The chancellor gave a foretaste of the grim state of the UK’s public finances, telling the BBC’s Andrew Marr: “I can tell you it’s a very difficult picture. The economy is experiencing significant stress.” He added: “There’s more stress to come.”

Although Mr Sunak said the spending review would focus on helping the country through the crisis, bleak new forecasts from the Office for Budget Responsibility, the fiscal watchdog, will spark a new debate about who will pay the bill.

The chancellor is expected to next year look at how the tax system works for the better off — including pensions tax relief and the capital gains tax system — as he tries to restore “sustainable public finances” after the pandemic has eased.

“I’m hopeful that by the spring, with positive news on both mass testing and vaccines, we can start to look forward,” he told the Sunday Times.

Boris Johnson has ruled out a return to “austerity” — although Mr Sunak will this week announce a public sector pay freeze, one of the hallmarks of the fiscal retrenchment after the 2008 financial cash. 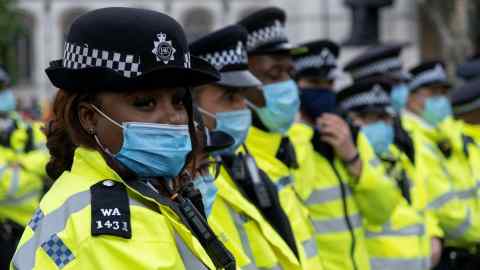 However tax rises rather than spending cuts are expected to bear the burden of a fiscal consolidation. For now, the prime minister is insisting on higher spending in some areas.

Wednesday’s spending review will include spending commitments for “a green industrial revolution” and a £16.5bn boost for defence, along with an extra £3bn for the NHS to help it cope with the fallout from the pandemic.

Mr Sunak, referring to Mr Johnson, joked he would like to “take his credit card away”, and this week’s statement is likely to mark a turning point as the chancellor prepares to recover some of the billions of pounds spent during the Covid-19 crisis.

There will be some moves in the statement to rein in borrowing, including the public sector pay freeze — excluding NHS workers — and an expected cut to the overseas aid budget which could save £4bn a year.

Borrowing in October hit £22.3bn, with public sector debt now over £2tn, creating political and economic conditions for what Treasury insiders admit will have to be some “big” decisions on taxation ahead of a spring Budget.

Even before the pandemic previous chancellors George Osborne and Sajid Javid looked at the system of pension tax relief, which mainly benefits richer people and costs almost £40bn a year in forgone income tax revenues.

The Conservative party’s election manifesto in 2019 pledged to remove “arbitrary tax advantages for the wealthiest in society”. It also promised not to increase rates of income tax, VAT and national insurance — a pledge Mr Johnson says he wants to keep — limiting Mr Sunak’s room for manoeuvre.

The chancellor, asked by Sky News’ Sophy Ridge about the so-called “tax triple lock” in the manifesto, left open the possibility that the promise might not be honoured: “I don’t comment on future fiscal events,” he said.