When the news broke out in 2015, Tim Cook must have breathed a sigh of relief: the FBI, which had requested Apple to forcefully unlock the password-protected iPhone of one of the San Bernardino terrorists, no longer needed its help. The Bureau managed to crack the iPhone with the help of a little-known Israeli company: Cellebrite.

Investing in 2020 is not easy: Covid-19 and its economic, political and social fallout out have created a perfect storm of uncertainty and a Fed-driven liquidity bonanza has kept equity prices at a dangerously high level. In this context, some investors may find Sun Corporation (JASDAQ: 6736), a Japanese company owning 71.55% of Cellebrite, a truly compelling opportunity.

Japan has notoriously been a rather shareholder-unfriendly jurisdiction historically. Nevertheless, there are clear signs that reality may be changing quickly, as Prime Minister Shinzo Abe sees in shareholder activism an effective way to prop up the economy.

Sun Corporation (“Sun”) was founded in 1971 focusing on electronics. It gradually expanded into personal computers and gaming and eventually acquired a few high-tech companies including Israeli Cellebrite. During the last few years, its legacy offline gaming business (Pachinko) started to deteriorate, with both sales and profitability steadily declining as gaming shifts online. A relatively passive CEO and a complacent board did not help. Fortunately, Cellebrite, which functions as a totally independent unit within Sun, continued to grow and thrive and it now accounts for 73% of Sun’s sales and 100% of its profits. The market seems to have overlooked Cellebrite’s growth trajectory and potential: sales have been growing at a 21% compounded growth rate in the last three years, yet the company still trades at a EV to sales multiple of 1.4x. 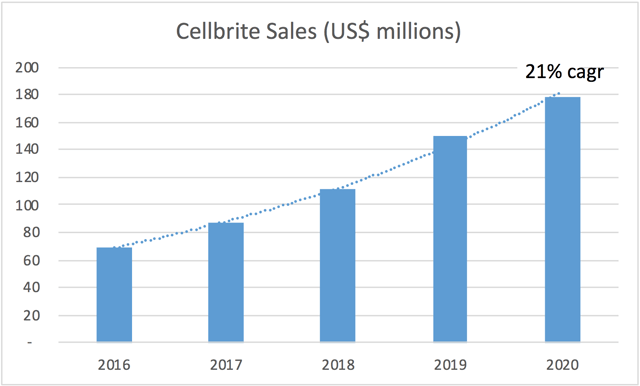 Cellebrite’s current product offering consists of a full spectrum of solutions for intelligence collection, analysis and presentation for law enforcement, military and intelligence agencies around the world. For example, the product sold to the FBI in the aftermath of the San Bernardino terror attack, allowed the Bureau to fully unlock password-protected data embedded in the suspect’s iPhone and retrieve all relevant information (e.g. text messages, social media, geolocation, etc.) while preserving the chain-of-evidence which proves critical in court. There are also several new additional products in the pipeline that can be seen on the company’s website.

Cellebrite has a lot appeal as an investment for the following reasons: 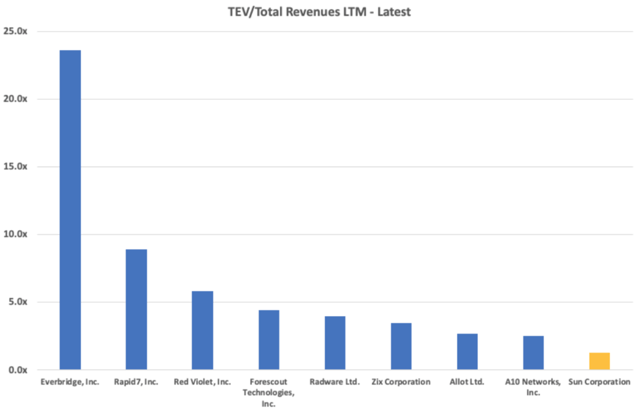 It should be noted that the recent income statement might be misleading as Sun closed an underperforming division and introduced a new stock option plan (more about this later). This has the temporary effect of depressing sales and generating a one-time loss (Cellebrite’s business continues growing at the usual pace).

What’s the catalyst? In April 2020, an extraordinary general meeting called by an activist investor in Sun resulted in a complete overhaul of the board and the executive suite. The new corporate governance is clearly shareholder-friendly and seems bent on creating value. The existing investor base, which promoted the change in governance, includes Oasis, a well-known Hong Kong-based activist hedge fund with an excellent track record in generating value, including in Japan (Quintessential owns a stake in Sun as well). Cellebrite itself is 25% owned by IGP, a well-known Israeli venture capital fund. Considering the sizeable presence of activist investors and the current benign management, it is fair to expect some value-creating intervention in the next 6 to 18 months.

The new corporate governance has already taken some encouraging steps, including divesting an underperforming division and providing strong incentives to Cellebrite’s team through an aggressive stock option plan (a rather “revolutionary” arrangement in Japan). Cellebrite’s last-twelve-months sales reached $178m, and current run rate is higher than $200m a year. The company plans to reach $400m by the next 18 months.

It is clear that mixing a hot company like Cellebrite with the decaying gaming business of Sun may well have been severely depressing its stock price. Additional bold interventions may then include spinning off Cellebrite as a stand-alone entity, closing Sun’s failing business units or listing on a foreign market like Nasdaq. Any of those interventions might result in a multi-bagger return on investment considering Cellebrite’s potential and Sun’s incredibly depressed stock price.

Disclosure: I am/we are long Sun Corp (6736.T). I wrote this article myself, and it expresses my own opinions. I am not receiving compensation for it. I have no business relationship with any company whose stock is mentioned in this article.