Suez is trying to derail a takeover attempt by its fierce rival Veolia by backing an eleventh-hour bid led by French private equity group Ardian for the up-for-grabs stake in its own shares held by Engie.

It is unclear if the push by water and waste group Suez comes too late to derail Veolia’s €3.4bn bid for the 29.9 per cent stake, which was welcomed by Engie on Wednesday night.

After obtaining more time from Veolia to formally accept the offer, ostensibly to try to take some venom out of the deal, Jean-Pierre Clamadieu, Engie’s chairman, said the time for alternate bids had passed.

The Veolia approach, which is the first step to a full takeover offer, has been aggressively dismissed by Suez from the start.

The affair also has become highly political. Engie’s largest shareholder, the French government, has said the companies should take their time to find a way forward.

Ardian, which is run by Dominique Senequier, said in a statement on Thursday morning that it had told Engie it wanted to buy the 29.9 per cent stake in Suez and had the backing of the company’s board.

The fund said it “wishes to form a consortium of private and public institutional investors, predominantly French, to carry out this project and launch a friendly public offer”.

Suez confirmed its support for the approach and the “all-cash takeover bid that would immediately follow for all Suez shareholders, under the same treatment conditions”. 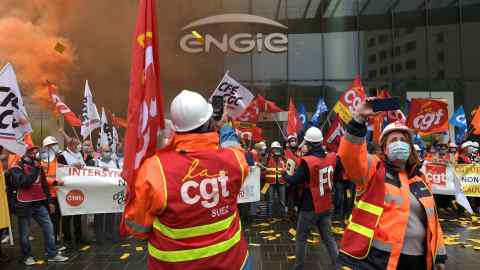 Engie said on Thursday that it had received the offer from Ardian before it said it welcomed Veolia’s latest bid, but that it had come too late and had lacked sufficient details, particularly on price.

This is the latest volley in the increasingly complicated and fraught three-way battle for the future of Suez, which was kicked off at the end of July when Engie said it was willing to consider offers for its full 32 per cent stake in the company.

Veolia’s bid arrived at the end of August, sitting just below the mandatory offer level and coming with the stated intention to snap up the rest of the shares if successful. An improved offer of €18 a share was lodged on Wednesday, which was welcomed by Engie.

Suez has pushed back hard against any deal, calling Veolia’s approach “particularly hostile”, selling assets and trying to demonstrate its value as a standalone business while looking for ways to mount a counter-offer.

The group also attempted to use a poison-pill defence last week by putting its French water assets in a Dutch protected foundation. Those assets were central to Veolia’s attempt to pre-empt competition concerns, having put in place an agreement to sell them to a French fund once a deal had been done.

That move was widely seen as an attempt by Suez to gain leverage in the fight with Veolia.

Engie and Veolia intend to try to get Suez to undo the foundation by the new deadline for an acceptance of the Veolia offer next Monday, according to people familiar with the matter.