As investors digest June’s strong jobs report, the Federal Reserve is giving those same investors a preview of what Chairman Powell will discuss next week on Capitol Hill when delivers his semi-annual monetary policy report to Congress on Wednesday and Thursday.

In the report, released Friday, policymakers repeated their pledge to “act as appropriate” to sustain the current economic expansion, now the longest in U.S. history, while noting that most Fed officials have lowered their expectations for the future course of interest rates.

The report mirrors sentiment from the Fed’s June meeting when policymakers signaled an uptick in risks, partially related to the ongoing trade war with China and other nations.

“In light of these uncertainties and muted inflation pressures, the Committee will closely monitor the implications of incoming information for the economic outlook and will act as appropriate to sustain the expansion, with a strong labor market and inflation near its symmetric 2 percent objective,” the FOMC statement said last month.

The twist between now and then is that June’s job report was stellar by many accounts. Employers added 224,000 jobs, blowing past expectations. All major industries, excluding mining and retail, added workers. 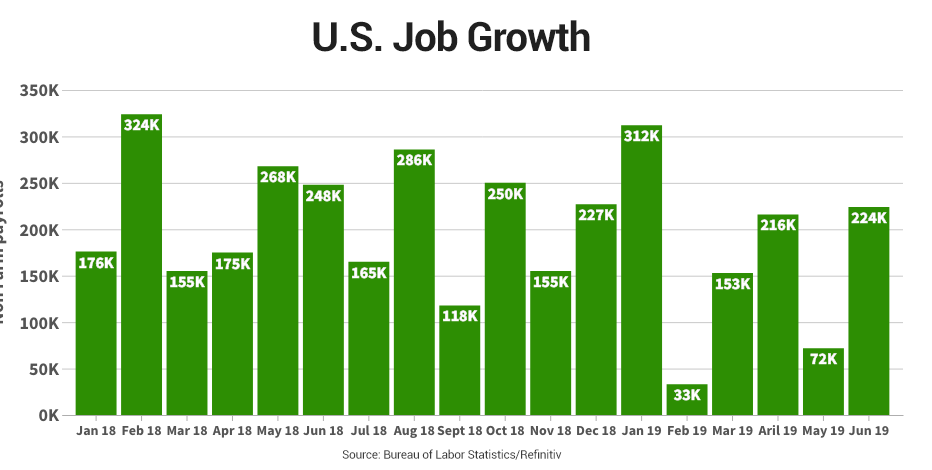 And, while the unemployment rate ticked modestly higher to 3.7 percent, economists praised Labor Force participation which showed 335,000 workers resumed their job search amid a tight labor and employers pulling out all the stops to hire workers. This as year-over-year wages rose 3.1 percent, slightly below estimates.

The data, by many accounts, shows the U.S. economy is humming along with little to no inflation lowering the view that the Fed will need to cut rates this year.

Even so, it did not stop President Trump from lashing out at the Fed yet again before heading to New Jersey for the weekend.

“We have a Fed that doesn’t know what they’re doing…but if we had a Fed that would lower rates you would have a rocket ship,” said Trump on Friday eluding to a potential trajectory for U.S. economic growth.

Next week, it is a certainty Powell will be asked not only his view on the U.S. economy but whether or not the latest jobs data will push any rate cut farther out in 2020 or whether one is needed at all.

Views that the Fed won’t be cutting rates anytime soon drove U.S. stocks lower on Friday, in what was a relatively light trading session following the July 4th holiday. Notable and perplexing to U.S. traders is bond yields continue to fall as well, showing investors are moving into less risky assets.

The yield on the 10-year treasury is hovering around 2.046 percent.

Martin Crustsinger of the Associated Press contributed to this report.

Previous PostICYMI: G Suite in 2019, so farNext PostHow Iran Will Determine If The US Dollar Remains The World’s Reserve Currency