Home Financial news Strong Economy And Half Century Unemployment Will Lead to Trump’s Re-election
2019-05-042019-05-04By finanz.dk

NEW YORK (AP) — The lowest unemployment rate in a half century. More than 260,000 new jobs. And higher hourly wages.

“I’ll be running on the economy,” President Donald Trump declared on Friday. And why wouldn’t he?

The day’s new round of sunny employment figures offered fresh evidence of a strong national economy — and a big political advantage for Trump just as the 2020 presidential campaign begins to intensify. Stocks are at or near record levels , too, as the president often notes.

But the Democrats who are fighting to deny the Republican president a second term are beginning to acknowledge the weight of their challenge: Since World War II, no incumbent president has ever lost re-election in a growing economy.

Even Trump’s critics are forced to admit the state of the economy could help him at the ballot box.

“Relative to all the other terrible aspects of Trump’s record, the economy is more of an asset to him,” said Geoff Garin, a veteran pollster whose clients include Priorities USA, the most powerful super PAC in Democratic politics. 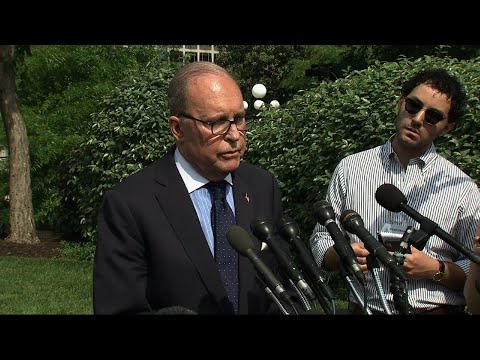 Indeed, it was a day of celebration for Trump and his allies, who have been well aware of recent warnings that the economy might slow this year.

The president’s chief economic adviser, Larry Kudlow, said the United States has entered “a very strong and durable prosperity cycle.” He gave all the credit to his boss: “He is president of the whole economy.”

By most measures, the U.S. economy is in solid shape. It is expanding at a roughly 3% pace, businesses are posting more jobs than there are unemployed workers and wage growth, long the economy’s weak spot, has picked up.

All these trends are helping lift a broader swath of the population than in the first five years or so after the Great Recession.

Low-income workers are actually seeing healthy wage gains — larger than everyone else’s. In March, the poorest one-quarter of workers were earning 4.4% more than a year earlier, according to data compiled by the Federal Reserve Bank of Atlanta. The richest one-quarter were up 3%.

Lower-income workers had started to outpace their higher-paid counterparts in 2015, so it’s not a Trump phenomenon. And part of the increase has occurred because of minimum wage hikes by more than two-dozen states.

The news isn’t good for everyone.

Workers in metro areas are still getting larger pay increases than those in smaller towns or rural areas, according to the Atlanta Fed’s data. In fact, that gap that has widened since Trump was elected.

And overall income inequality hasn’t narrowed. The richest 5 percent of Americans earned 3.4 times a median worker’s pay in 2018, according to the left-leaning Economic Policy Institute. That’s up from 3.3 times as much in 2016.

“I think he should get credit where credit is due,” said Bartos, a 69-year-old registered Democrat who backed Hillary Clinton. “And I think that he helped a lot of people but left a lot of people out.”

Three hundred miles to the west in Cleveland, another former Clinton supporter, 42-year-old IT manager Jessica Wieber, said she feels “pretty good” about her economic situation.

“I think he’s had a big impact,” she said of Trump’s effect on the economy, adding that tax breaks given to companies and corporations have allowed them to hire more workers.

“I hope it helps trickle down a bit,” said Wieber, a single mom with four children.

Amid the largely positive news for Trump, friends and foes alike question whether he can stay focused on the economy as the 2020 contest plays out. Blessed with similarly positive news in the past, he has veered into more controversial topics like immigration, the Russia investigation and personal attacks against his rivals.

Democrats, in fact, are counting on him to change the subject.

“The economic indicators would normally be incredibly positive for an incumbent president,” said Jefrey Pollock, the pollster for Democratic Sen. Kirsten Gillibrand’s presidential campaign. However, the pollster said hopefully and somewhat rudely, “He can’t shut his mouth.”

At this point, 18 months before Election Day, Trump’s political standing is far weaker than the economic numbers would suggest.

The latest CNN poll finds 43% of Americans approve of the way he is handling his job as president. That’s even as 56% say they approve of his handling of the economy, marking a high for the president since he took office.

He receives lower marks for other issues, including health care, immigration and foreign policy.

Specific candidates aside, the General Social Survey, a respected nationwide survey, has found that the share of Americans feeling satisfied with their finances has returned to pre-recession levels.

In 2018, about a third expressed satisfaction with their financial situation, up from 23% in 2010. About 4 in 10 said their finances had been improving over the previous few years, while just 15% felt them worsening.

In 2010, more than twice as many said their financial situations were getting worse.

Last month, the government report said, the African American unemployment rate was 6.7%, up from a record-low 5.9% last May. That’s more than double the rate for whites. And in 2017, according to the latest data available, the black-white income gap widened, with the typical African American household earning $40,258, while the equivalent white figure was $68,145.

By some measures, the job market has been better in the past.

A much smaller proportion of Americans are working than in the late 1990s, the last time unemployment was nearly this low. Part of that is because the United States is aging and baby boomers are retiring.

But even among workers aged 25 through 54, which filters out the impact of retirement and increased college attendance, a smaller percentage of people are working: In April 79.7% had jobs. That figure peaked at 81.9% back in 2000.

How much all this will affect the election is an open question.

Ray Fair, a Yale University economist who uses economic data to model election outcomes, says that the state of the economy in the first three quarters of an election year matters more than the rest of a president’s term.

Fair’s model points to a Trump victory in 2020, should the economy continue along its current path.