Quite a few analysts are calling for a major market top, and with the U.S. economic picture appearing bleak, it’s hard to criticize them. But as we’ll discuss here, the market has a potentially major upside catalyst based on the strong yield advantage of equities over bonds. And if my analysis is correct, the S&P 500 Index (SPX) will go on to completely recover its losses from the virus panic and make a new high in the coming months.

As is typical of the weeks and months following a market panic, investors have fled risk assets and have instead run to the safety of cash and sovereign bonds despite the relative attractiveness of stocks. Even with the market having rebounded more than 30% from its March lows, retail investors are still ignoring stocks and evidently prefer safety to capital gains. Yet this preference should change in favor of equities as the economy gradually re-opens and virus-related fears subside.

In support of this view is Bank of America’s Savita Subramanian, who said stock allocations among its clients has fallen three percentage points to 57%. Meanwhile, cash allocations among clients have risen to nearly 14%, which are above historical levels. Subramanian believes it’s possible that $1 trillion in cash could flow into equities in the coming weeks and months based on the “extreme attractiveness of stocks over bonds.” She further believes that this rotation, should it occur, would drive the market higher. According to a CNBC article:

Subramanian pointed out stocks have not been this attractive relative to bonds since the 1950s, noting the S&P 500’s dividend yield is roughly three times that of the 10-year U.S. Treasury note.

If Subramanian is correct, investors are still lagging behind the market and haven’t yet rushed into equities (which invariably happens before a major top is in). Therefore, this is a good piece of anecdotal evidence that the bears’ recent calls for another major sell-off are likely premature.

Further supporting this conclusion are recent data from the Investment Company Institute (ICI) which show that total domestic and world equity fund flows have been diminished in recent months despite the general market rally. Here you can see that total inflows have once again gone negative in spite of the 36% gain in the SPX. 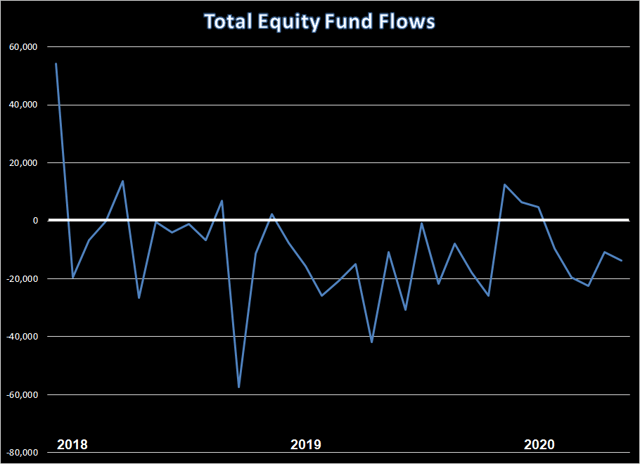 That’s usually a pretty good indication, from a contrarian’s perspective, that there’s more upside ahead for stocks. By contrast, the danger of a market top increases exponentially when uninformed retail traders pile into the market. But with apparently limited participation from this crowd right now, there’s still plenty of money on the sidelines to support higher stock prices in the months ahead.

The view I’ve articulated in recent months is that the SPX should completely recover its losses by this summer based on my observation that the March selling event was a classic headline-driven panic. Panics almost always are followed by a fast rebound in the markets and a recovery to pre-panic levels for obvious reasons: since panics are irrational reactions to news, once participants have recovered their heads and realized that their panic was without foundation, it stands to reason that old highs should be reclaimed as they repent their decision to sell and eventually pile back into the market to regain their “lost inheritance.” This is all the more likely to be true if the underlying assumption behind the panic turned out to be false.

The catalyst for the March panic was that the coronavirus would have a massive death count (potentially above 1 million by some accounts) and would likely cripple the U.S. economy. Neither of those fears have come to fruition, and it now appears that the economy has been far more resilient than many analysts anticipated.

As discussed in my previous commentary, U.S. retail sales are showing signs of rebounding, led by above-average e-commerce sales (online shopping jumped to a record $783.5 billion in March alone). The returning strength of the retailers is reflected in the following graph of the SPDR S&P Retail ETF (XRT), which has shown an impressive resurgence of late. It’s worth noting that strength in retail stocks can serve as a harbinger for higher levels in the SPX. 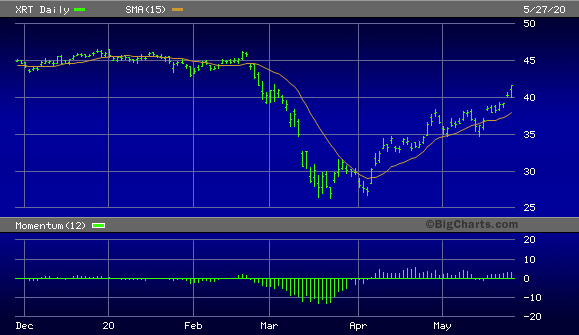 Even real estate is showing preliminary signs of pent-up demand and is already rebounding in some key states, including Illinois and Florida, with Miami in particular showing a marked improvement in demand among prospective home buyers.

Especially gratifying from a bullish perspective is the strong rebound in broker/dealer stocks. I regard the broker/dealers as being the single most important industry for confirming the strength or weakness of the broad market, and my observation has been that whenever the NYSE Arca Securities Broker/Dealer Index (XBD) is lagging the SPX for an extended period of time (usually around three months or more), it almost always precedes a significant increase in broad market volatility).

Here you can see that after lagging the S&P for the last couple of months, XBD is finally about to catch up to the benchmark index and may soon eclipse it in terms of relative performance. Continued strength in XBD tells me there’s still room for the S&P 500 to go higher. 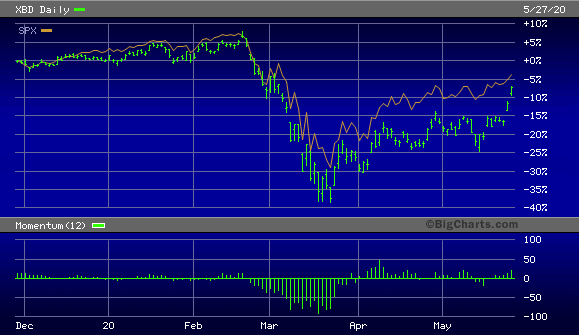 In conclusion, the evidence we talked about here suggests there’s a distinct lack of participation among investors right now, which in turn means there’s still plenty of cash on the sidelines that can be used to fuel additional rallies in equities. Recent strength in the critical retail sector and broker/dealer industry is also an encouraging sign pointing to additional gains ahead in the major indices. In view of these considerations, I believe a continued bullish intermediate-term (3-6 month) bias toward equities is still warranted.