Stocks I Bought On The Dip: AutoZone (NYSE:AZO)

I have two core methods of sharing my investing ideas and strategies on Seeking Alpha. The first method is via public articles like this one, and the second is via the Cyclical Investor’s Club. Since launching the Cyclical Investor’s Club on 1/12/19, I’ve always tried to strike a reasonable balance between my public ideas, which everyone can read for free, and the private ideas, shared exclusively in the CIC. Over time, I have decided to break these ideas into two distinct categories where ideas about stocks that comprise the S&P 500 are made public and all the rest remain private. I’ve tried to abstain from first sharing an idea in the CIC, and then, after the price has run up, sharing the idea as still being a “buy” with the public because I didn’t like the way it felt to me ethically.

The recent market dive happened so quickly, however, that there was no way I could write public articles in time for all the stocks I purchased in March. From February 28 through the end of March, I purchased 33 stocks (plus suggested members buy Berkshire Hathaway (BRK.B, BRK.A), which I already owned), and most of the stocks were purchased in the five trading days nearest the bottom of the market’s dip. I could barely keep up with the purchases via the real-time chat function in the Cyclical Investor’s Club, much less write full public articles about them all. Of those 34 stocks, 19 of them were components of the S&P 500, and I only managed to write about one of them publicly – Comcast (CMCSA) – at the very beginning of the downturn. So far, in addition to Comcast, I have now covered Hologic (HOLX), FLIR Systems (FLIR), Sysco Corporation (SYY), Tractor Supply (TSCO), Microchip Technology (MCHP), Align Technology (ALGN), Genuine Parts Company (GPC), Ameriprise Financial (AMP), and Ross Stores (ROST) in the series. Most of these stocks will no longer be “buys” at their current prices, but I will share both my “buy price” and my “sell price” for the stock in each article so that if we have a double-dip, readers will know the prices at which I think the stocks are buys, and if the market rips higher, readers will know the initial threshold at which I would consider selling and taking profits. After I’ve shared all the S&P 500 stocks I bought during the dip, I’ll analyze them as a group to see if we can discern any patterns that emerge or any mistakes I made that could help improve my investing approach in the future.

Today’s stock is AutoZone (AZO), and it’s one I’ve done quite well with since purchasing on 3/20/20.

Thus far, AutoZone has significantly outperformed the return of the S&P 500 index from the day it was purchased. One of the reasons I share the relative performance along with the individual stock performance is because there are usually a few readers who will chalk up the success of a purchase like this to good timing rather than buying the stock with a good valuation. So, in the chart above, one should read the performance of the S&P 500 as the portion of the returns that can fairly be credited to timing (or luck). And those returns from the market of +36.63% are certainly great returns over three months or so. But the outperformance AutoZone achieved beyond that I think is fair to credit to good stock selection and valuation rather than good timing.

Next, I’ll take you through my process for identifying the value in AutoZone. 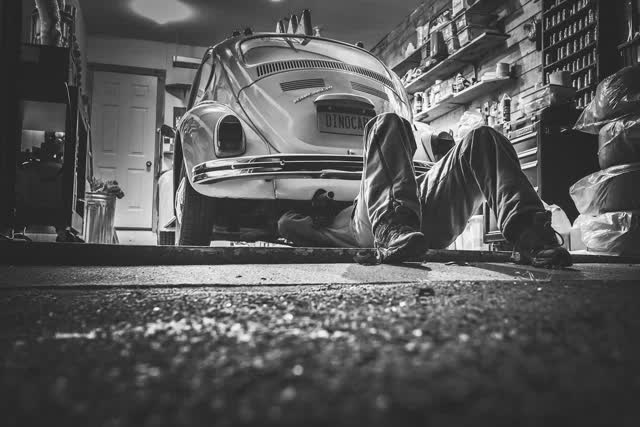 Step 1: Determine the Cyclicality of Earnings

On the F.A.S.T. Graph above, the adjusted operating earnings for AutoZone is represented by the shaded dark green area. Over the course of the past 20 years, AutoZone has never had a year with negative EPS growth. I term businesses that have achieved this “secular growth” stocks and they are an elite group. Last year I sifted through about 5,000 stocks in order to see how many of these secular growth stocks there were that had grown earnings through two recessions, and I found less than 20. So, AutoZone has truly been an elite business. This year EPS is expected to fall -1% by analysts, so the streak may end this year, but AutoZone’s success has been undeniable the past two cycles. It is very rare to be able to buy stocks in this category at a good price.

With an essentially non-cyclical business like this one, fairly traditional valuation systems using P/E ratios and earnings growth estimates work reasonably well to predict future returns, so the full-cycle approach using traditional methods is what I used for AutoZone (if earnings had been more cyclical, I would have used a different method of valuing the stock).

Next, I’m going to run what I call a “Full-Cycle Analysis,” which is the same analysis I performed that flagged AZO as a buy in March. As part of the analysis, I calculate what I consider to be the two main drivers of future total returns: Market Sentiment returns and Business returns.

In order to estimate what sort of returns we might expect over the next 10 years, let’s begin by examining what return we could expect 10 years from now if the P/E multiple were to revert to its mean from the previous economic cycle. I start the previous cycle around the end of 2007, a little before the last cyclical peak. 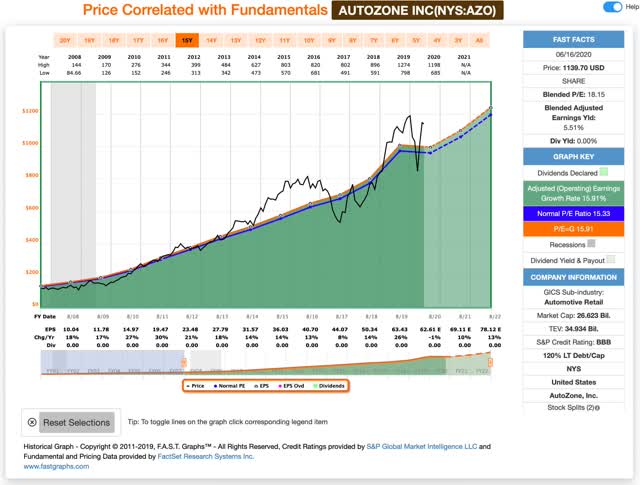 As I write this, AZO’s blended P/E on the F.A.S.T. Graph is 18.15, while its normal P/E this past cycle has been 15.33. Even though earnings growth has never gone negative for AZO the past two decades, it doesn’t mean that earnings growth doesn’t slow during recessions. For that reason, when we are in a recession as we are now, I use peak earnings and the current price to establish a P/E ratio. When I do that for AZO, I get a little bit lower P/E of 17.43 than the blended P/E from FastGraphs.

If, over the course of the next 10 years, AZO’s P/E were to revert to its normal 15.33 level from its current 17.43 level and everything else was held equal, it would produce a 10-year CAGR of about -1.28%. (My minimum threshold for purchasing a stock during the current recessionary downturn is a +1.00% expected 10-year CAGR from sentiment mean reversion. When I bought AZO in March, it had a P/E ratio of 11.40, which would have produced a 10-year sentiment mean reversion CAGR expectation of about +3.01%, well above my minimum threshold).

We previously examined what would happen if market sentiment reverted to the mean. This is entirely determined by the mood of the market and is quite often disconnected, or only loosely connected, to the performance of the actual business. In this section, we will examine the actual earnings of the business. The goal here is simple: We want to know how much money we would earn (expressed in the form of a CAGR %) over the course of 10 years if we bought the business at today’s prices and kept all of the earnings for ourselves.

There are two main components of this: the first is the earnings yield and the second is the rate at which the earnings can be expected to grow. Let’s start with the earnings yield. Using peak earnings, the current earnings yield is about +5.74%. The way I like to think about this is, if I bought the company’s whole business right now for $100, I would earn $5.74 per year on my investment if earnings remained the same for the next 10 years.

The next step is to estimate the company’s earnings growth during this time period. I do that by figuring out at what rate earnings grew during the last cycle and applying that rate to the next 10 years. This involves calculating the EPS growth rate since 2007, taking into account each year’s EPS growth or decline, and then backing out any share buybacks that occurred over that time period (because reducing shares will increase the EPS due to fewer shares).

AutoZone has bought back a tremendous about of shares this cycle, essentially amounting to 2/3rds of the company. It has also been very consistent, with what looks like only a single quarter where it didn’t buy back stock during the Great Recession. These purchases no doubt helped its consistent EPS numbers over this period. However, I will back these out when calculating my earnings growth estimate. After doing so, I calculate a cyclically adjusted earnings growth rate of approximately +8.45% over the course of the last cycle. That’s still a very good earnings growth rate, but it’s only about half of the +15.91% one would get if they simply measured from 2007 to 2020 and didn’t take into account the buybacks.

Next, I’ll apply that growth rate to current earnings, looking forward 10 years in order to get a final 10-year CAGR estimate. The way I think about this is, if I bought AZO’s whole business for $100, it would pay me back $5.70 plus +8.45% growth the first year, and that amount would grow at +8.45% per year for 10 years after that. I want to know how much money I would have in total at the end of 10 years on my $100 investment, which I calculate to be about $192.06 (including the original $100). When I plug that growth into a CAGR calculator, that translates to a +6.74% 10-year CAGR estimate for the expected business earnings returns.

Potential future returns can come from two main places: market sentiment returns or earnings returns. If we assume that market sentiment reverts to the mean from the last cycle over the next 10 years for AZO, it will produce a -1.28% CAGR. If the earnings yield and growth are similar to the last cycle, the company should produce somewhere around a +6.74% 10-year CAGR. If we put the two together, we get an expected 10-year, full-cycle CAGR of +5.46% at today’s price.

My Buy/Sell/Hold range for this category of stocks is: above a 12% CAGR is a Buy, below a 4% expected CAGR is a Sell, and in between 4% and 12% is a Hold. Currently, AZO is in between 4% and 12%, and that makes it a Hold at today’s prices. If AZO’s price were to keep rising without a corresponding rise in earnings, it would cross the “Sell” threshold at about $1,270, at which point I would consider putting a trailing stop in for the stock.

I was very pleased to have found a true secular growth stock to buy during the downturn in the form of AutoZone. Hopefully, earnings will start rising next year and I’ll be able to hold this stock for many years to come. However, if the price gets too expensive relative to expected long-term earnings, I won’t hesitate to take profits and find another stock to invest in that is trading at a better valuation. Right now, what the price does in the near future is almost entirely in the hands of the central bank and policy-makers in Washington. It’s unclear to me how long they will be able to keep up the sort of stimulus we have seen over the past few months, particularly in an election year. So, I’m not going to pretend to know whether AutoZone goes higher and breaks my sell threshold, or goes lower and becomes a buy again (or does both). But I am fully prepared and know what I will do in either scenario. My buy threshold for AutoZone is $750.00 per share.

If you have found my strategies interesting, useful, or profitable, consider supporting my continued research by joining the Cyclical Investor’s Club. It’s only $29/month, and it’s where I share my latest research and exclusive small-and-midcap ideas. Two-week trials are free.

Disclosure: I am/we are long AMP, HOLX, AZO, BRK.B, CMCSA, FLIR, ALGN, GPC, SYY, MCHP, ROST, TSCO. I wrote this article myself, and it expresses my own opinions. I am not receiving compensation for it (other than from Seeking Alpha). I have no business relationship with any company whose stock is mentioned in this article.