STOCKMAN: Dump Trump: Why Conservatives Should Punt on Nov. 3rd 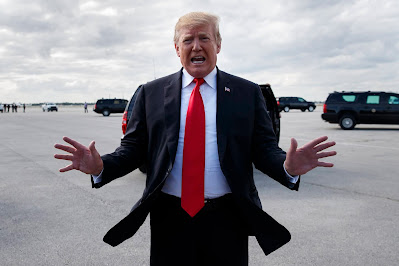 David Stockman is out with a Kindle book, Dump Trump: Why Conservatives Should Punt on Nov. 3rd

I haven’t read the book yet, but here is the blurb:

New York Times bestselling author David A. Stockman is the ultimate Washington insider turned iconoclast. He sounded the alarm about U.S. deficits in the Triumph of Politics (1986); warned in The Great Deformation (2013) that rampant money-printing at the Fed and speculation on Wall Street were imperiling main street prosperity; and illustrated how Flyover America was being left high and dry with TRUMPED! (2016) and PEAK TRUMP (2018).

Now, Stockman asserts Trump’s disastrous launch of Lockdown Nation last March and resort to massive government spending, borrowing and money printing to repair the damage has left conservatives with no choice but to not re-elect in DUMP TRUMP: Why Conservatives Should Punt on Nov. 3rd .

In this meticulously researched and inside account, Stockman asserts “the Donald’s bad works are legion and massively overwhelm the good”. These include his embrace of rank fiscal profligacy, money printing madness, the Covid-Lockdown disaster, misbegotten trade and border wars and Law & Order demagoguery.

He further writes, “Trump’s embrace of what amounts to crackpot economics has not only left the nation spiraling toward the Mother of all Financial Disasters, but he has also finally euthanized what remained of GOP fiscal rectitude”.

With respect to the Donald’s assertion of “The Greatest Economy Ever”, Stockman shows that the economic growth rate on Trump’s watch during the 13 quarters prior to the Covid-19 outbreak was actually the worst among the 11 administrations since Truman, and Trump has drastically worsened the underlying cause of America’s baleful economic predicament. The debt and speculation ridden economy he inherited now threatens to actually capsize under a record $81 trillion of public and private debt, which amounts to an off-the-charts 405% of GDP.

Stockman concludes: “So we are left with one injunction: Conservative voters of America unite and sit this one out. You have nothing to lose except your grievously misplaced faith in Donald J. Trump!”

DUMP TRUMP extensively documents how the last four years have proven that the Donald is not fit for conservative purpose:

No Washington swamps have been drained;

The Leviathan on the Potomac has been egregiously fattened, not contracted;

Nearly $8 trillion of new public debt has badly undermined national security, even as the Pentagon has waxed fat and happy on $175 billion of annual Trump defense increases it didn’t need

The nation’s $3 trillion Welfare State and its ObamaCare appendage have flourished while suffering nary a nick of reform;

The Forever Wars have been carried on largely as before by his own appointees with troops still pointlessly remaining in Syria, Iraq, Afghanistan, South Korea and Germany.

None of the malign national security abusers like Comey, Brennan, Clapper or Rice have been prosecuted and the Donald has consistently surrounded himself with neocon enemies like Pompeo, Haspel, Coats, Bolton and war-mongering generals;

The one thing that can protect liberty and free market prosperity—the restoration of Federalism so that Red State governance can attract refugees from the depredations of Blue State politicians—has been not just neglected, but actively undermined by the Donald’s bombastic attempts to impose “law and order” from Washington.

However, Stockman insists that Trump’s greatest failure has been his handling of the Covid-19 Pandemic and embrace of the “foolish advice of Dr. Fauci and his camarilla of malpracticing doctors”. Stockman provides extensive data showing the Swedish Model was the right answer from the beginning and that economically destructive lockdowns, quarantines and stay-at-home orders were wholly unnecessary.

Stockman insists that “the buck stops with the Donald” because he was too inattentive to see through Fauci’s flawed models, and too unschooled in constitutional government to recognized that lockdowns were an impermissible violation of personal liberties and private property.

I can’t argue with Stockman here. He is correct on all counts with regard to Trump’s performance.

Further, I will be sitting this election out also, but I always do.

I will be publishing an essay in the next couple of days: “Why I Don’t Vote.” It looks at voting from a perspective I have not seen presented before.