The 11 major ETFs are akin to the scaffolding or frame of the broader markets. By looking at them in detail, we can get a good idea of broader market themes.

Investment thesis: Currently, no sectors are attractive. In addition, the general movements of the sector ETFs indicate the broader averages are probably heading lower. Don’t take any new positions until this plays out a bit more.

Let’s start by looking at the top- and bottom-performing sectors over five time periods:

The utility ETF is now up in the two most recent time periods – it was the second-best performer last week and the top performer during the last month. This could signal a shift to more defensive sectors. Consumer discretionary appears in four columns; basic materials and technology are in three.

Energy is in all five columns. Its performance has been negatively impacted by weak oil prices and a sector burdened by heavy debt levels (fundamentally, the sector is weak). Financials and real estate are in three columns for the same reason. Financials will start to report larger losses due to real estate issues while real estate is dealing with lower rent payments and a wave of retail and leisure bankruptcies.

READ ALSO  How our cities changed when the tourists stopped coming

Next, let’s take a look at the RRG graph for the 11 main sectors: 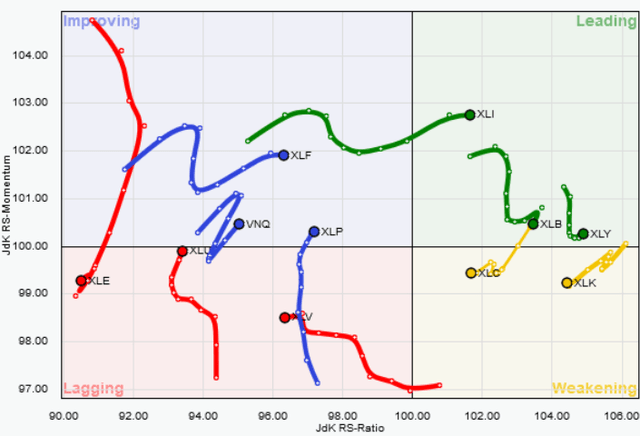 This graph contains a large amount of key information, starting with the right side. Technology, communication services, and consumer discretionary are three of the largest components of SPY and QQQ; the fact that both are weakening means both indexes will have a difficult time rallying. The industrial and basic materials ETFs are the only two in the “leading” quadrant. As I’ll show below, both are in corrections. The three defensive sectors (health care, utilities, and staples) are the only three sectors that are rising. Since the combined total of all three is 21.6% of SPY and 12.8% of QQQ, it’s highly unlikely either index will outperform in 4Q20. Real estate is normally considered a somewhat defensive sector. However, that position has been upended during the pandemic.

Now, let’s take a deeper dive into the sectors, starting with the basic materials industrial combination. It’s best to think of these sectors as being mutually dependent; basic materials supply the raw materials for the industrial sector. As I noted earlier this month, the fundamentals for this pair are solid. But both sectors are currently in a period of profit-taking: 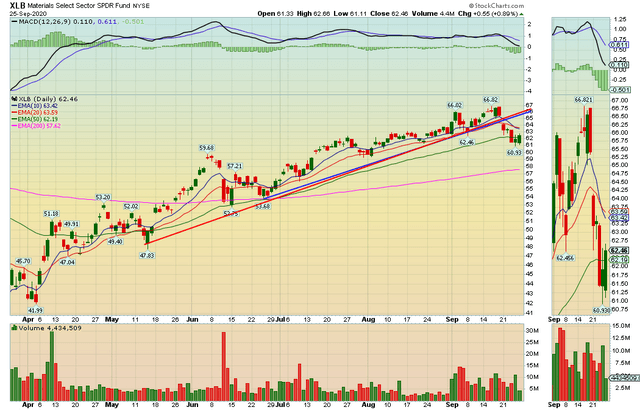 The basic materials chart has been in an uptrend since early April. Prices broke this trend earlier this week. Volume increased significantly in September, probably indicating a buying climax. Momentum is declining. 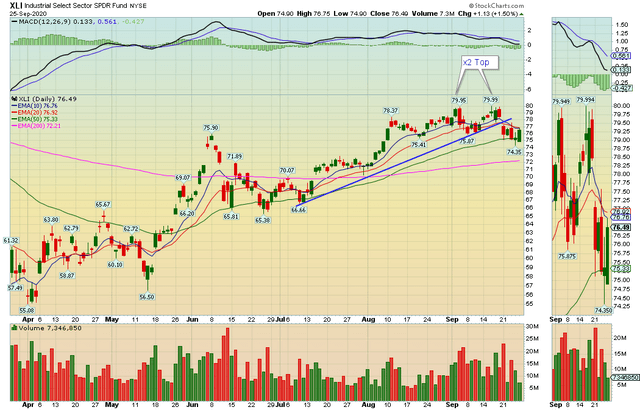 Momentum (top panel) has been declining since early June. Prices formed a shorter uptrend that started in early July that climaxed in a double top in early September. Volume increased earlier this month which was probably a short-term buying climax.

There isn’t a great deal of readily available fundamental information on the tech or communication services sector (although I’m still looking). But both are in a solid correction. 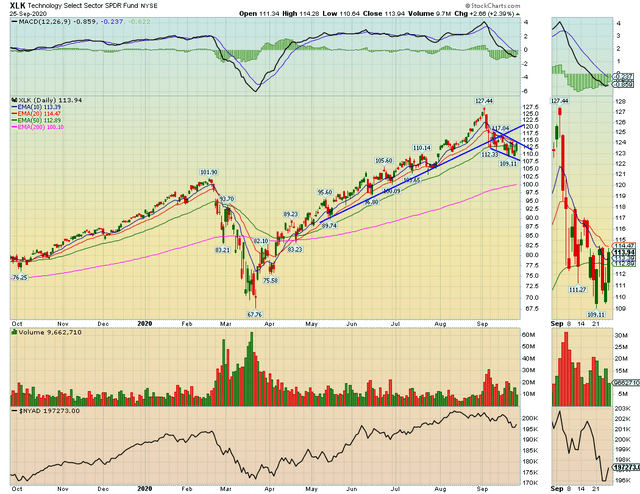 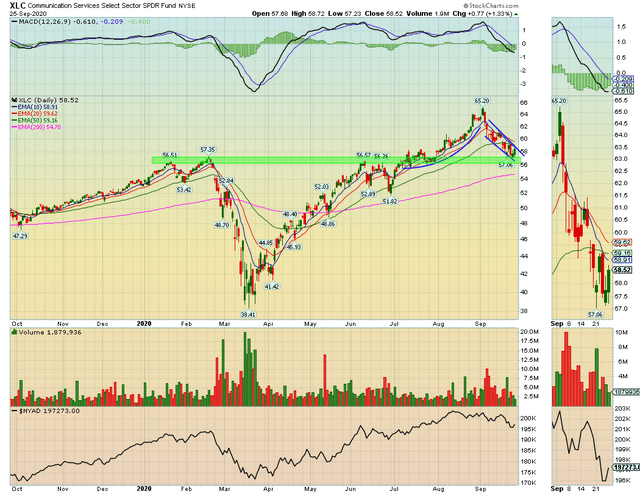 Communication services have the same pattern.

Before looking at the defensive sectors, let’s wrap up this section. Tech and communication services are clearly in corrections, which means QQQ will have a difficult time moving higher. The same goes for SPY, although to a lesser degree. The latest rally pair – basic materials and industrials – are also correcting. The combination of these two developments makes a broader rally in the larger indexes very challenging.

Now, let’s take a look at the defensive sectors. First, they represent a very small percentage of the largest averages (see above). Even if they do rally, they probably won’t be able to move the market higher.

But two of these sectors are also in a correction: 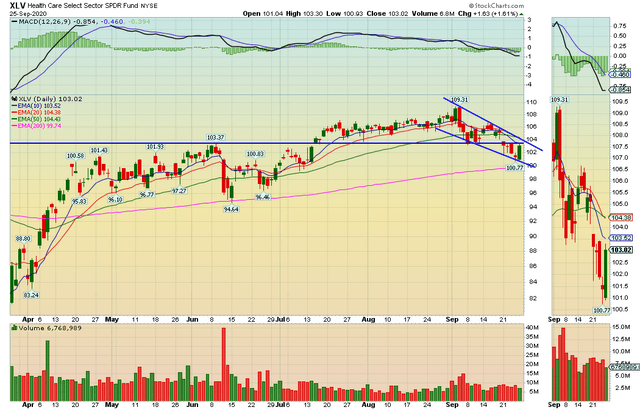 The health care ETF has been in a downward sloping channel that started in September. It broke support in the 103 area early this week. 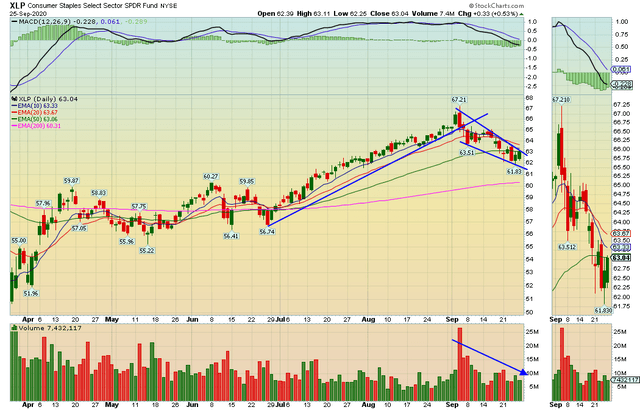 Consumer staples (which has strong fundamentals) is also in a correction.

That leaves utilities, which are in a weak position: 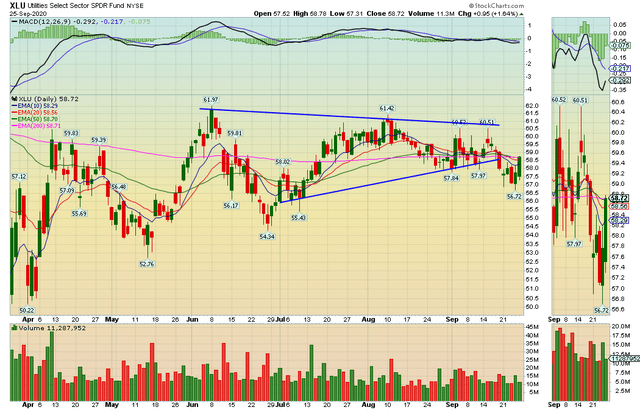 The sum total analysis of all the sectors is clear: keep your powder dry and wait to take new positions.