Staring Into The Abyss: Lookers (OTCMKTS:LKKRF)

Lookers is a long-established car dealership chain in the United Kingdom. The economic downturn associated with COVID-19 lockdown has hit it, but more alarmingly it has also revealed discrepancies in its accounts and potential fraud.

My thesis is that there are too many unknown elements to justify an investment in Lookers at the present time. It may be very cheap by historical standards, but I have a question mark over the firm’s ability to survive as a going concern. Until the fog around the company’s true financial health clears away, it is not investable with confidence.

Lookers plc: About the Company

The company has dealerships across the British Isles. It has been in existence since the early nineteenth century and now has over 150 franchise dealerships. Its dealerships operate under local brand names in some cases, such as the well-established Taggarts in Scotland. The company deals a wide range of cars from basic Fords to luxury marques such as Ferrari and Jaguar, so its diversification gives it a certain insulation from underperformance of any one marque for a given period.

It listed in 1973 and has built into today’s firm by a series of acquisitions since then.

Recently, though, its shares have plummeted as it has been hit by a triple whammy:

The first of these two I regard as unproblematic over the long-term: the group has a diverse portfolio and established customer relationships, so should be able to overcome the dip in car sales associated with a downturn and also a shift in management. That said, car sales decline in the U.K. to date this year has been precipitous and surely will cause trading problems for all car dealerships.

Table: U.K. New Car Sales are at Less than Half of their Previous Year Run Rate 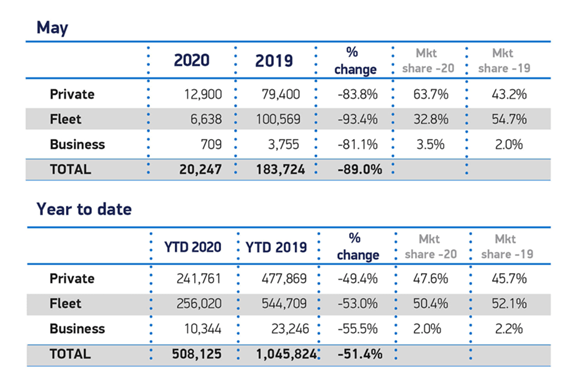 The CEO and COO leaving at the end of 2019 was already a negative indicator, but the replacement COO stepping down after just weeks in the role is a further sign that there are serious problems in Lookers. He stepped down the day after the potential fraud was revealed.

Even without those challenges, the fraud investigation is a possible terminal blow, especially when the economic conditions generally are unfavourable.

The company announced on 10 March that publication of its 2019 results would be delayed due to the identification of potentially fraudulent transactions in one of its divisions. It anticipated a £4 million charge on its 2019 results for this, which seems like small beer. There were irregularities in incentives for selling certain marques as well as some expense claims.

READ ALSO  Peter Schiff: The Fed Has Never Been Right

This was extended into an investigation across all divisions, and the appointment of an external accounting firm to investigate. This revealed further irregularities which would likely result in a further charge being taken, although the board still anticipated that the group would still be profitable for FY 2019 on an underlying pre-tax profit basis.

On 4 June, Lookers announced that its 2019 results should be published by the end of June, subject to banking discussions and audit sign off. Just a few days later, on 8 June, it put out an announcement saying that due to ongoing discussions with its auditor, the report would not now be published by the end of June , and although it would publish it as early as possible it pushed back the latest date for publication to the end of August. The auditor, Deloitte, has informed the company that it intends to resign after the publication of the 2019 results, after being the auditor since 2006 (by the by, the company’s ex-CFO and one non-executive director are ex-Deloitte). Additionally, if the results are not published by the end of June, the company’s shares will be suspended until the results are published.

That is a lot to take in, but it’s red flag after red flag. The fact that the expected publication date announced on a Thursday was then pushed back on the following Monday is not consistent with a management in control of the situation, in my view.

Car sales were already in decline before the lockdown, although Lookers performed slightly better than the market overall. Still, as well as volume decline, there was margin pressure.

The Investment Case for Lookers

We need to treat the company’s historical results with caution given the ongoing investigation into possible historical misstatement. We do not know how accurate the recent years results may turn out to be. However, if we discount the past five years, we still see a business that had top and bottomline growth most years. Using today’s share price and earnings from 2011-2013, for example, the p/e ratio would come in at around 4.

Discounting the past five years seems prudent as it was from 2016 that the company’s results showed surprising strength for such a mature business, as shown by its jump in market share

During lockdown, some sites were reopened to service essential workers’ vehicles and earlier this month, all sites reopened. However, it still expects 55% of staff to be furloughed in June, so clearly trade is far from normal. But its size and diversity have helped it weather previous economic downturns.

The company is proactively managing its challenges. It plans to close twelve sites, in addition to fifteen sites it announced for closure last November. It also emphasizes that its property portfolio had a net asset value of £325 million at year end 2019. That’s about 85p per share, which even allowing for the company’s current debt would still more than cover today’s deflated share price. That alone is quite interesting, even if one is downbeat about the company’s short-term prospects. However, whether the property book values could be achieved in a fire sale of assets is speculative.

Historically it was a progressive dividend payer and using today’s depressed share price, the yield looks juicy. For example, the 2018 dividend would be equivalent to a yield of 17%.

However, even if the fraud problems don’t eliminate or lower the dividend dramatically, the economic environment may. As the above table shows, it was only in 2018 that the company was able to return to the payout level seen before the financial crisis a decade before.

If we take the positive view and say that there will be several years of volatility while the company’s finances are straitened out, the economic downturn bites and the reduced dealership footprint it envisages to cut costs leads to reduced sales, a return to the 2008 payout rate (similar to the drop after the last financial crisis) would imply a yield of 6.6% on today’s share price. Given all the uncertainty and the delay in dividend repayments coming on stream again in all probability, that valuation doesn’t sound that strong actually. Today’s share price of around 25p may be factoring in that future yield, discounted for the chance that there is worse news to come.

The Case Against Lookers

Lookers has some strengths and could reward investors at today’s depressed prices with a five-fold return if it returns to a share price seen before the fraud started to emerge.

However, I believe that it could easily go to zero. The accounting shenanigans, auditor resignation and seriously delayed results all raise questions about the size and shape of the company’s accounting problems. That level of certainty can cause nervousness amongst suppliers and bankers, which can bring down companies even if the initial crisis is survivable. I am particularly concerned about this paragraph in their 4 June update as it raises the question of whether the company’s results will have any implications on its compliance with banking covenants:

Despite a proactive investigation and transparency, there are a lot of moving parts here. The whole things stinks at this point.

Lookers has a long, successful history of trading and there is a fair chance that once its current problems are sorted, it can return to health, making today’s share price a steal. However, there are too many unknown elements to have confidence in this. The chain of accounting events are already a grave concern, even without the additional market pressure brought on by lockdown and economic downturn. Until there is clear evidence that the company has come out the other side of its accounting problems, I don’t think it is prudently investable.