Starbucks recently met its pledge to hire 25,000 military veterans and spouses, hitting the benchmark six years ahead of its original schedule, FOX Business has learned.

The Seattle-based coffeehouse chain announced plans in 2013 to expand military hiring, later setting a goal of 25,000 hires by the year 2025. Starbucks has also opened 61 “military family stores” near active-duty bases, with plans to unveil 71 more themed locations by 2022.

The company has set a new goal to hire 5,000 veterans and military spouses each year, according to Matt Kress, Starbucks’ senior manager of veteran and military affairs and a 22-year veteran of the U.S. Marine Corp. Kress said active participation from Starbucks employees, who spread the word about job opportunities in their communities, and partner organizations such as the U.S. Chamber of Commerce’s “Hiring Our Heroes” initiative, helped the chain match its pledge faster than expected.

“As we’ve hired more and more, and they’ve been integrated into the fabric and culture of Starbucks, our [employees] understood these are great people to bring into our teams,” Kress told FOX Business. “They were definitely driving it from the field aspect of it, just getting the word out there and talking to people in their communities who were leaving the military.” 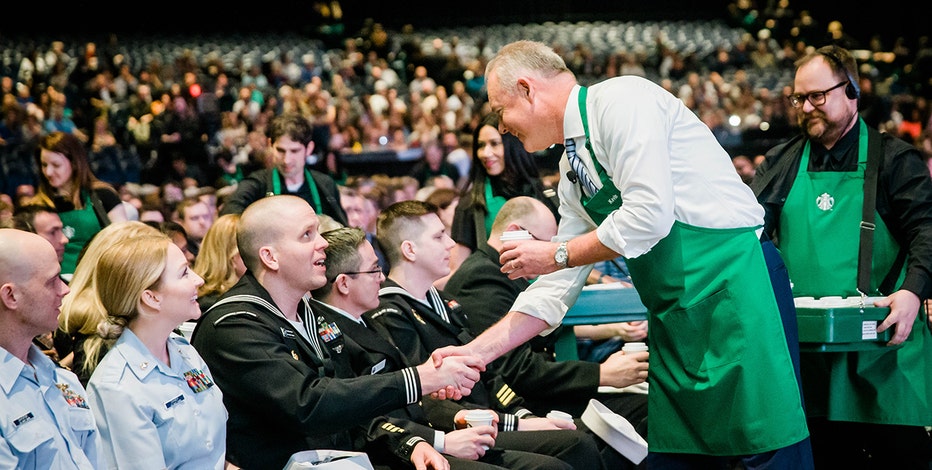 Military veterans often face financial hardship while transitioning to civilian life. A 2018 survey by nonprofit Blue Star Families found that 62 percent of military families reported stress due to their current financial situations, while 37 percent felt insecure about their financial future. About 16 percent of the nation’s approximately 700,000 military spouses are unemployed, a rate that far exceeds current civilian unemployment levels.

READ ALSO  Airbnb looks to raise up to $2.5bn in IPO

As part of its hiring initiative, Starbucks coordinates store transfers for military spouses as their significant others are periodically relocated to new bases for active-duty service.

“They want to stay with Starbucks and we want them to stay with Starbucks, because they’re natural leaders in our stores, they know how to build community wherever they go, and they’re incredibly enthusiastic and committed to the job,” Kress said. “When those orders come every two or three years, we have the ability and the focus to get them set with their next store in their new community.”

President Trump issued an executive order in May 2018 that sought to create more job opportunities for military spouses at federal agencies, and Starbucks was one of several companies to partner with “Hiring Our Heroes” on a pledge to hire a combined 100,000 military spouses by the end of 2021.

Aside from “Hiring Our Heroes,” Starbucks works with several military-focused nonprofits to facilitate hiring and outreach, including Blue Star Families, Team Rubicon, Team Red White and Blue, The Mission Continues and individual USO branches. The company offers up to 80 hours of paid leave for employees with National Guard or Reserves service obligations.

Starbucks’ “military family stores” serve as hubs for the company’s outreach and hiring efforts, Kress said. Located close to military installations, the stores feature unique art and pictures tailored to nearby bases. Employees at military stores are given “patriotic aprons” at a dedication ceremony, which feature the American flag, their name and their service designation.

“[Military] families are looking for ways to get off base in a place where they can spend time and meet their community,” Kress said, adding that the stores offer career transition resources for active-duty servicemen and women. 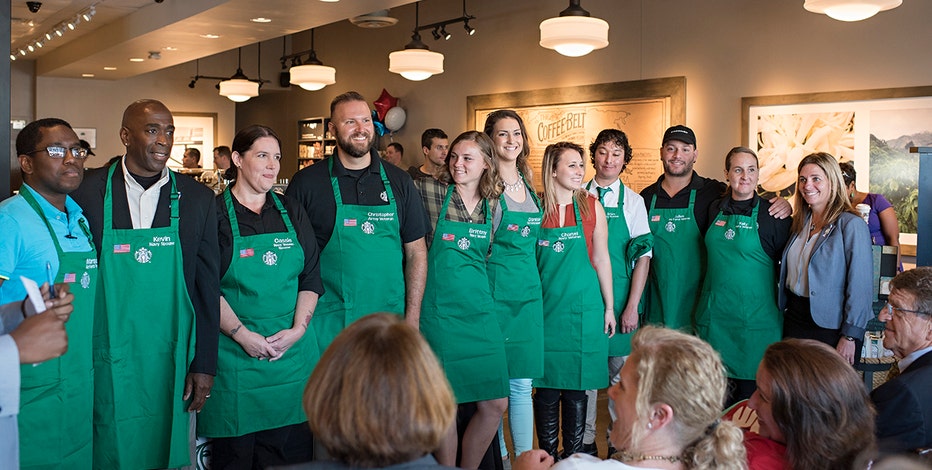 Starbucks committed to its new military hiring pledge just days after the chain drew widespread criticism following an incident in which a barista asked six police officers to leave a store location in Tempe, Arizona. The Tempe Officers Association alleged that some of the six officers were military veterans.

Starbucks executive vice president Rossann Williams apologized for the incident, which she referred to as “completely unacceptable.” Tempe officials acknowledged that they had spoken with Starbucks executives about the situation.

“What occurred in our store on July 4 is never the experience your officers or any customer should have, and at Starbucks, we are already taking the necessary steps to ensure this doesn’t happen again in the future,” Williams said.