S&T Bancorp (STBA) is a regional bank headquartered in Indiana, Pennsylvania, and recently boosted its balance sheet by the $200million+ acquisition of DNB Financial in 2019. This strengthened S&T’s position in Pennsylvania, while the bank also operates in Ohio and (Upstate) New York. As I have been looking at some smaller regional banks in the past few months, I wanted to have a closer look at how STBA is navigating through the current COVID-19 crisis and how safe its dividend is.

A closer look at the financial performance

In the third quarter of this year, STBA recorded an interest income of almost $77 million, while the total interest expenses continued to decrease. This helped the Pennsylvania bank to report a very robust net interest income of just over $69 million. 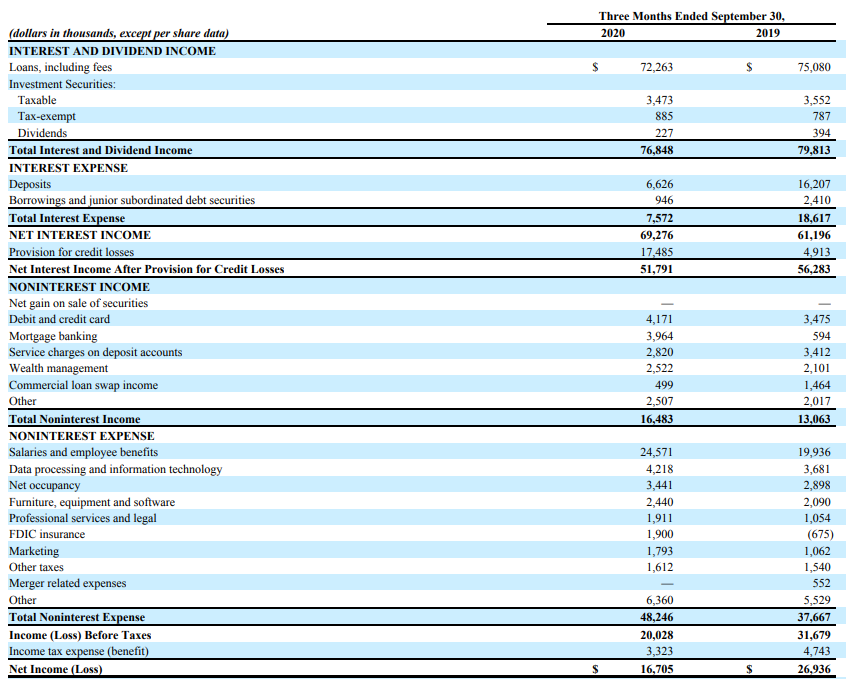 Although the loan loss provisions remain at elevated levels, the $17.5 million in Q3 provisions is already much lower than the in excess of $100 million in loan loss provisions recorded in the first half of the year. As most of S&T’s borrowers have exited the modification status, it perhaps makes sense for the bank to reduce its provisions, as most loans have started performing again (technically, a modified loan was never qualified as “non-performing,” even if no payments were made).

What does the S&T Bancorp loan book consist of?

Of the $7.4 billion (pre-provision) loan book, $5.8 billion is considered a commercial loan. $3.3 billion was allocated towards commercial real estate, while the remaining $2.5 billion consists of other commercial-related loans. Residential loans and mortgages represent just $1.5 billion, and although this should provide a decent cushion, we simply can’t deny that commercial loans are clearly the risk-defining factor here.

In a way, it’s a huge relief to see that of the $5.8 billion in commercial loans, only $350 million remains in a modified loan schedule, so perhaps we should not exaggerate the immediate risk related to the investments in commercial loans. Additionally, approximately $550 million of the loans classified as commercial loans were part of the PPP program and carry a much lower risk than “pure” business loans.

Additionally, of the $7.4 billion in total loans, less than $100 million was actually past due.

The image above also shows that of the $2.82 billion in loans related to commercial real estate, only $47 million (just over 1.5%) was past due. Looking at the commercial loans, only $7.3 million of the $1.82 billion was past due. And even if all loans that are currently classified as “past due” would default and the bank needs to seize the assets, the net losses attributable to S&T Bancorp will likely be lower, as the value of the collateral in the real estate segments should provide a cushion. Unfortunately, I was unable to find detailed LTV ratios for both the commercial real estate as well as the residential real estate, so it’s a bit difficult to establish exactly how safe these loans are.

We will see in the next few quarters if and how the loans continue to perform, and I will be very interested to see how S&T Bancorp will continue to unwind the positions where the loans have been modified. While I’m usually not too keen on financial institutions with a strong focus on commercial loans, the low levels of loans past due at S&T Bancorp are encouraging (on the condition the current $350 million in loan modifications doesn’t get converted into loans past due after the modification period ends).

For now, the quarterly dividend of 28 cents per share appears to be safe, as the EPS in Q3 came in at 43 cents per share despite recording in excess of $17 million in loan loss provisions.

I currently don’t have a position in S&T Bancorp, but I’ll keep an eye on this Pennsylvania-based bank. Although I’m not too keen on a high exposure to commercial loans, it looks like S&T Bancorp could be an interesting “higher-risk” position for my portfolio.