SSE: For The Dividend Yield And The Green Growth Plans (OTCMKTS:SSEZF)

The aim of being a utility is to be a safe and stable supplier of those essential things that need to be provided. Water, electricity, sewage… the sort of things that keep society running.

On the investor side, this brings with it certain characteristics. Secure cash flows mean that the utility can operate while fully geared up. There’s also likely to be a secure dividend, as the business doesn’t change much over the years. The absence of significant capital gain – or likely such perhaps – means that the dividend yield is likely to be high.

So, barring significant error from the management, a utility is likely to be a safe and high-income stock – good for the widows and orphans section of a portfolio.

This is indeed largely true of SSE (SSEZF, SSEZY), which is largely an electricity producer and supplier in Scotland and England. It’s now free of retail operations and concentrates upon generation. This is exactly one of those stable sectors where we can expect decent dividend yields.

We can see the interesting bits of the recent results: 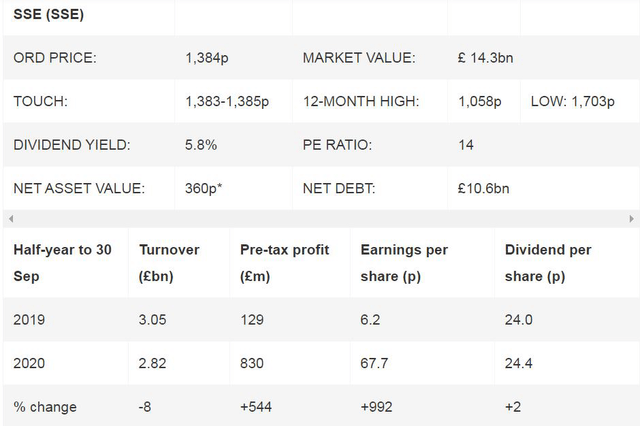 We could just think, well, 5.8% dividend yield, looks safe too… OK, we’ll treat it simply as an income stock. As such, it’s vaguely interesting, and that’s about it.

Note that the rise in profit there is as a result of disposals, not a boom in operating results. Note also that there have been falls in operating results. COVID-19 does that. Partly a fall in industrial demand, partly an increase in industrial sector bad debts. But the drop here has clearly been much less than the bloodbath in certain retail and entertainment sectors.

We can look at the half-year results in more detail here.

While I say that utilities are supposed to be, and often are, fairly boring dividend generators for the risk averse, this isn’t quite wholly and entirely true. Especially when the game is on to entirely redesign the method of electricity generation, as is happening in the UK.

That’s the move to renewables. Given SSE’s start, in part, in the Highlands hydro industry, it makes sense that the company’s into this whole switch. The company has also announced that it’s going to be pushing hard to expand in this area.

SSE has set out plans to triple its renewable energy generation by 2030 as it prepares to build the world’s largest offshore windfarm off the north-east coast of England.

The Dogger Bank project is part of SSE’s plan to invest about £7.5bn on clean energy in the UK, which would help triple the company’s existing renewable energy capacity.

This doesn’t work quite as some American utilities do. Where there’s an agreed rate of return on capital, prices can be moved to achieve that. Thus, more capital in use, higher profits. Rather, the British system of subsidy is that suppliers, like SSE, bid on a project. The bid is, what is the strike price they’ll need for the electricity? The lowest technically feasible bid wins.

That price – under a contract for difference – is then guaranteed for the period of the lease. Which is set at around and about the technological life of whatever energy production system is being used. So, as long as the initial bid is reasonable, profits tend to get locked in.

The strike prices are:

These are nicely higher than prices at which it is possible to make money. As with the company’s newly open field:

SSE adjusted operating profit from renewables rose about 25% in the last financial year, boosted by full output from the 588MW Beatrice offshore wind farm off Scotland.

Note that the strike price is set for the lifetime of the field, so revenues are locked in. Further:

By 2030 it expects to increase its renewables output from 11 terawatt hours (TWh) to “more than” 35TWh. It currently has renewables capacity of just under 4 gigawatts (GW), with a pipeline to reach about 10GW by the end of the decade.

As above, all of that comes with contracts for difference, guaranteeing the income from the sites and fields.

SSE has experience here, and it’s not known for overbidding, so we can expect this to be a series of profitable endeavours. Do also note that sure, there are difficulties with renewables and intermittency. In that British system, those difficulties land on the grid – an entirely separate organisation – not the energy generators like SSE.

That is, expansion into more offshore wind and the like isn’t a hugely exciting business. Remarkably, it’s fairly mature as a technology these days. But it is also profitable, has a decent return on capital and this significant move into it is likely to be a strong underpinning to that dividend and its growth over time.

I’m not hugely in favour of renewables given that they seem to be an economic boondoggle to me. But then, of course, being on the right end of a boondoggle is a profitable place to be. I’m also not terribly excited by utilities, as they tend to be income stocks rather than the rough and tumble of capital gains.

However, having said both those things, SSE has its attractions. Substantial expansion into a technologically mature and price guaranteed area could produce reasonable growth in that dividend, not just underpin it.

If you’re looking for a solid yield in sterling plus a possibility of decent growth in it, then SSE should be on your list of stocks. This isn’t something to plunge into in the hopes of significant capital gains. But for a decent and rising income, if that suits your investment priorities, then SSE is a good part of a widows and orphans portfolio.