The company has spent hundreds of millions of dollars on an aggressive push into podcasts, including $100m to bring Mr Rogan to its app.

This week the Swedish group came under fire when Mr Rogan hosted Mr Jones on his show, where he promoted unsubstantiated claims about the dangers of vaccines. Large tech groups including Facebook, Apple and Twitter have banned Mr Jones, the far-right founder of Infowars who has previously said the 2012 school shooting in Sandy Hook was a hoax.

However, when asked about Mr Rogan’s decision to invite Mr Jones on Spotify’s most popular podcast, The Joe Rogan Experience, Mr Ek told the Financial Times on Thursday that “we want creators to create. It’s what they do best. We’re not looking to play a role in what they should say.”

Spotify is applying its content policies “across the board, including if you are a superstar”, Mr Ek said, referring to Mr Rogan. But “in this particular instance, it does not entail what guests our podcasts invite on, it’s more about the content itself”, he added.

As it pushes further into owning its own programming, Spotify faces the headaches and controversy that hang over YouTube and other big tech platforms over the content on their sites. Spotify has been adding hundreds of thousands of podcasts to its app to attract new users and keep its existing customers engaged.

The company on Thursday also hinted at price increases, noting that it has added a tremendous amount of music and podcasts to the app without charging users more.

Spotify’s average revenue it makes from subscribers, a key metric watched by investors, dropped 10 per cent from a year ago to €4.19 in the third quarter.

The music streaming leader has long resisted raising prices, which have hovered around $10 a month in the US and Europe, citing its focus on growth over profit. But in an interview with the FT, Spotify’s chief financial officer hinted that its strategy was changing.

“We are aware [average revenue per user] has been coming down for a couple of years, and we have every incentive to start to get that moving in the right direction,” said Paul Vogel.

Spotify this month raised the cost of its “family plan” tier in countries such as Australia, Belgium and Switzerland, and further price increases are “something we will continue experimenting with”, Mr Vogel said. 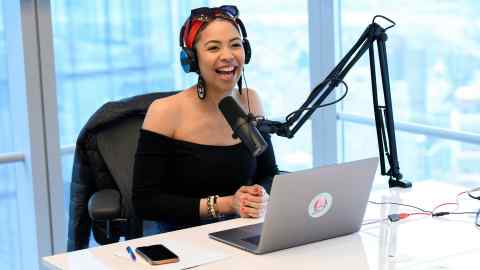 The music streaming leader added 4m subscribers in the September quarter, as listening recovered from lockdowns during the pandemic, when fewer people were driving and commuting.

“All regions have fully recovered” to normal usage, Spotify said in a letter to investors, noting that albums such as Taylor Swift’s Folklore and singles such as “Dynamite” by K-pop group BTS as important music releases in the quarter.

The company had reached 144m paying subscribers by the end of September, on the high end of its forecast and Wall Street estimates.

Spotify had previously flagged up some “notable” declines in daily use in Italy and Spain during late February, as well as a hit to advertising revenues amid an industry-wide downturn in marketing spending during the spring months.

Spotify said advertising had also recovered during the third quarter. However total revenues climbed just 14 per cent year over year to €1.975bn, which Spotify partly blamed on the depreciation of the US dollar versus the euro. Wall Street analysts had been looking for €2bn.

Spotify shares have soared more than 80 per cent this year, as investors flocked to companies that were less disrupted by the pandemic.

Shares in Spotify were down about 4 per cent in pre-market trading in New York on Thursday.