SPHB: There Are Easier, Better Paths To High Beta (NYSEARCA:SPHB)

Aggressive investors might take interest in Invesco S&P 500 High Beta ETF (SPHB). Introduced in May 2011 and carrying a 0.25% expense ratio, SPHB provides exposure to the 100 component stocks in the S&P 500 with the highest beta over the previous 12-month period.

At first glance, I think it’s a good and rather elegant concept. The rule (100 highest-beta stocks) is simple and sensible, and while it’s an aggressive strategy, at the end of the day, holding 100 stocks in the S&P isn’t a particularly scary proposition.

I have to say I think there’s a fundamental flaw with this idea. With the existence of leveraged S&P 500 ETFs, the only reason you’d choose SPHB over a leveraged ETF like SSO would be if you expected SPHB to generate alpha and outperform the S&P in terms of risk-adjusted growth.

Let me explain. By multiplying daily gains of the S&P 500 by 2, SSO lets you amplify the S&P’s expected returns while locking in its Sharpe ratio (with a small hit from expense ratio and tracking error). As I’ve said before, that’s a remarkable thing. It lets you bypass the usual rule of investing, which is that in pursuit of higher raw returns you have to sacrifice risk-adjusted performance.

The question then becomes: Should we expect high-beta stocks in the S&P to have better risk-adjusted performance than the rest? That’s a worthy research question in itself, and one I’d like to pursue separately. It’s a critical question for SPHB because if the answer is “no”, then SPHB would be totally trumped by leveraged ETFs.

Performance of SPHB Since Inception 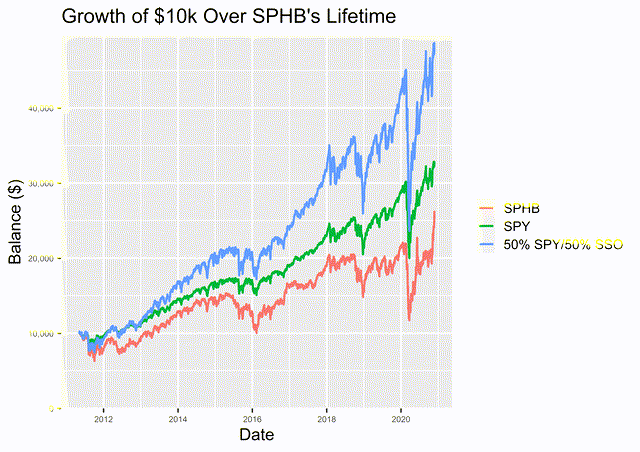 This doesn’t look good: in a great 9.5-year period for the S&P, the more aggressive SPHB lagged behind. Conversely, and as we’d expect from an up-leveraged strategy during a bull market, SPY/SSO achieved much larger growth than the S&P.

Looking at more specific performance metrics, we see extremely discouraging results for SPHB. With substantial negative alpha, it lagged the S&P by 2.7 percentage points while experiencing a much larger max drawdown and worse Sharpe ratio. Meanwhile, the SPY/SSO split performed quite well, outperforming SPY by almost 5% annually with the expected slightly negative alpha and slightly worse Sharpe ratio. Its max drawdown was worse than SPY and even a bit worse than SPHB, but that’s a predictable and unavoidable consequence of high beta.

As I mentioned earlier, the make-or-break question for SPHB is whether high-beta stocks tend to generate more alpha. Over SPHB’s lifetime that apparently hasn’t been the case, as we see here by looking at its alpha each year since inception. It’s only positive 2 years out of 10. 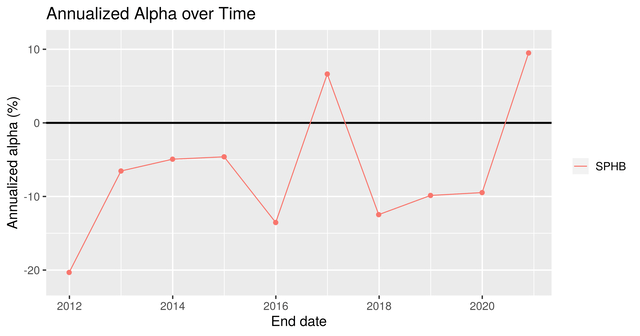 While investing in a high-beta subset of S&P 500 stocks seems like a good way to amplify returns, it, in fact, relies on the questionable (and so far untrue) assumption that high-beta stocks generate especially good risk-adjusted returns. In my opinion, it’s an unnecessarily speculative play, as leveraged ETFs offer a simpler and better path to outsized returns.