Shoppers’ rush to online stores during the pandemic propelled shares in Shopify to new highs on Wednesday, after it said purchases through its network of ecommerce sites more than doubled in the second quarter, surpassing spending on eBay for the first time.

Shopify’s revenues rose 97 per cent to $714.3m compared with the same period a year ago, busting through Wall Street’s consensus forecasts of about $500m.

Gross merchandise volume, a measure of consumers’ total spending through Shopify’s network of stores before fees and revenue splits with shop owners, rose 119 per cent year on year in the second quarter to $30.1bn.

That figure outstrips the $27.1bn in GMV reported by ecommerce pioneer eBay on Tuesday, demonstrating Shopify’s strong momentum among retailers both large and small who are having to transplant their business online due to continuing restrictions on the high street.

Shopify saw a particular increase in food, beverages and tobacco, as well as a recovery in its traditional mainstays of apparel and cosmetics. New retailers joining Shopify in the quarter included cowboy hat maker Stetson and brewer Molson Coors.

“Strong transactional revenue, far ahead of even the highest expectations, point to Covid-19 tailwinds that are stronger at [Shopify] than most anticipated,” analysts at Citigroup said in a research note on Wednesday.

Ottawa-based Shopify also swung to a profit in the quarter, reporting net income of $36.0m, compared with losses of $28.7m in the second quarter of 2019.

New stores created on Shopify, seen by investors as a key metric for future growth, grew 71 per cent in the second quarter compared with the first three months of 2020.

“The world is changing fast,” said Tobi Lütke, Shopify’s chief executive and co-founder. “With the rapid shift to online commerce, massive disruption to conventional employment and growing conviction that opportunity needs to be more evenly distributed, entrepreneurship has never been more important.” 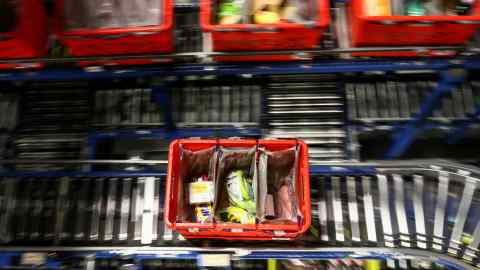 However, Shopify did not provide guidance for the rest of the year, as the shift to ecommerce driven by Covid-19 was counterbalanced by the “greater likelihood of an extended global recession” and fluctuating lockdowns.

Growth in GMV accelerated during April and May but slowed down in June and so far in July, Shopify said.

Shopify’s stock initially opened 11 per cent higher at a new all-time intraday high of $1,107 on Wednesday, giving it a market capitalisation of $130bn. Its shares have more than tripled in value during the past 12 months as it grew to become the largest ecommerce platform after Amazon in the US.

Shopify’s valuation is now triple that of eBay, whose shares opened 3 per cent lower after it reported what it called its “best quarter in 15 years” on Tuesday afternoon. While eBay’s second-quarter earnings beat analysts’ forecasts, its 2020 outlook fell short of Wall Street’s expectations.