Spain’s flagship anti-poverty provision has caused a deluge of benefit claims and a months-long lag in payments, fuelling a heated political debate about its implementation.

The country’s authorities have received more than 1m applications for support under the new minimum income guarantee since its inception four months ago, leaving officials struggling to keep up.

At present, only half of the requests have been processed, with a total of about 136,000 households due to receive the benefit in coming days, according to the government. Officials had expected that 850,000 households would qualify for the minimum income guarantee.

Spain’s opposition People’s party, which voted with the government in June to pass the guarantee into law, has denounced the administrative “chaos”, which it says has punished “thousands of particularly vulnerable families”.

The centre-right PP says the processing glut has slowed down the payment of other benefits, but the government has argued that any delay in paying benefits has been limited and primarily the result of the pandemic.

José Luis Escrivá, Spain’s social security minister, who championed the minimum income guarantee and pushed it through, said the public response showed the need for the new measure, and that a “massive effort” by officials and new technology was allowing the government to speed up the processing of claims.

“In just the first month and a half we received as many [minimum income guarantee] requests as the number of pension applications we receive each year,” he said. 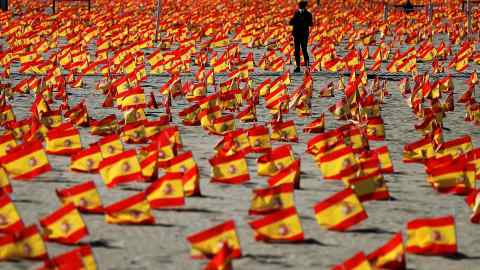 The measure, introduced in June, is designed to help the 2.3m poorest in the country by ensuring a household income ranging from €461 to €1,015. The administration of the guarantee is complex — with 14 different categories for top-up payments for households, depending on the number of adults and children in each.

Although the guarantee was already part of the coalition agreement between the Socialist party and the radical-left Podemos grouping, which together make up Spain’s minority government, it gained new urgency this year with the pandemic hitting the country hardest in Europe. Spain’s government expects output to contract 11.2 per cent this year, while the IMF puts the drop at 12.8 per cent.

In light of the severity of the economic crisis, the government had discussed whether to put in place short-term poverty relief measures but ultimately decided to accelerate introducing the minimum income guarantee.

Mr Escrivá’s ministry says that about 160,000 requests are pending, because of problems such as a need for further documentation, while 192,000 have been refused, primarily because people’s wealth or income was more than the thresholds to qualify as a recipient.

Overall, about 975,000 applications have been received — excluding more than 40,000 that have been submitted twice or were not completed — of which about 488,000 have been processed. Mr Escrivá said the government would look in January at whether the rules for the guarantee need to be changed.