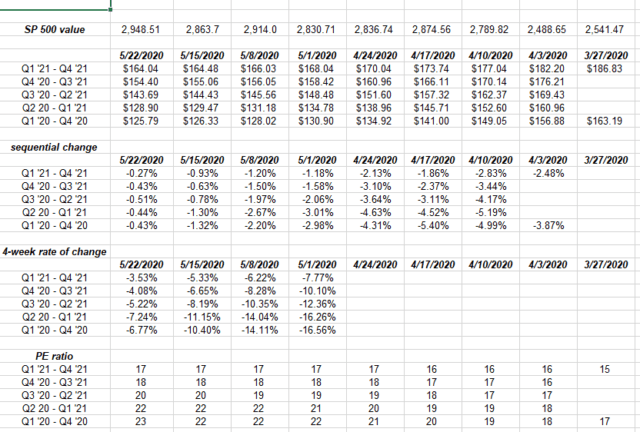 Using Refinitiv’s Earnings Aggregates published this morning, Friday, May 22nd, 2020, and updating our spreadsheet, readers can see the continued decline in the rate of erosion in forward estimates, which – all other things being equal – should be very much a positive for the S&P 500 and the US stock market.

I’m putting importance on the relationship between the 2019 actual S&P 500 EPS and the 2021 estimate. Others might disagree with that though.

Buybacks – The Difference Between “Net Income” and “Earnings”

If readers want to get a quick and meaningful evaluation of the influence of buybacks on the S&P 500 earnings growth, this Refinitiv table from their May 22, 2020, “Earnings Scorecard” report does a great job of numerically portraying an emotional argument.

Look at the difference in year-over-year growth of “net income” and then the bottom line of “earnings” in the above chart/table.

“Earnings” should really be “earnings per share,” but we’ll let that go for now.

Readers can see how there was a 4% point difference between earnings and net income in Q1 ’17 and that slowly narrowed the rest of the year, with smaller differences for 2018 and 2019.

For 2020, the difference between net income and earnings is non-existent as companies are both conserving cash given the unprecedented nature of Covid-19 AND the socially unpalatable aspect of companies both laying off workers and then repurchasing stock. Companies appear to have become very aware or politically correct about the public relations aspect with 30-35 million potentially unemployed Americans (all but Apple (NASDAQ:AAPL) that is).

I think it’s smart for companies to be aware of this, but as Josh Brown commented in one of his CNBC appearances within the last month, “if all that capital had been returned via the dividend as opposed to the share repurchase, no one would have cared”. He’s exactly right.

Warren Buffett basically said the “emotion” around share repurchases as a way to return capital to shareholders is not as politically incorrect as it’s being painted.

As usual, Mr Buffett has it exactly right.

Hope that helps and clarifies a confusing topic.

Summary/Conclusion: When topics such as buybacks get traction on social media and the “hipsters” and those who are “woke” get hold of complex topics such as this, it can have a chilling effect for corporations. You can’t “unring” a bell. Refinitiv’s expectations for the next three quarters show diminished buybacks are “expected” for Q2, Q3 and Q4 ’20, but I’d bet if unemployment starts to fall faster than expected and growth starts to return in the back half of 2020, we might see where corporations will repurchase shares, particularly in the devastated sectors.

Take all this with great skepticism. This blog and the earnings estimates deal with “expected” estimates based on informed opinions of sell-side analysts.

These expectations, opinions and estimates can be very wrong.