‘Something is ending’: German towns braced for US military exit

Nearly everyone in the Bavarian towns around the army base has a favourite childhood memory of the US soldiers.

One councillor in Vilseck recalls pilfering beers for cadets, in exchange for sugary American breakfast cereal. A travel agent in Grafenwöhr recounts his grandmother serving food to Elvis Presley, the town’s most famous visiting sergeant. For Sabine Kedeker, the 14th generation in her family to run Vilseck’s Angerer Hotel, it was her first taste of a strange drink called Dr Pepper.

“It was so good,” she said with a laugh. “I grew up with Americans — they were like a part of our household. [Now] we are worried economically, but I also have this sadness, this sense that something is ending.”

Last month, US President Donald Trump announced plans to pull almost 12,000 troops from military bases across Germany. This means thousands of personnel stationed around Vilseck and Grafenwöhr may soon be withdrawn from US Army Garrison Bavaria, one of the largest overseas American bases in the world.

The German towns hosting American soldiers once told the story of an occupation-turned-alliance in the years following the second world war. Now, they reflect a transatlantic relationship under strain.

In 1945, Ms Kedekers’ grandfather returned from fighting on the Nazi side to find his hotel, like his country, occupied by US troops. The beginning was tense, she said, but his descendants offered Americans their Bavarian beer and hospitality ever since.

Today, the signs in Grafenwöhr and Vilseck are in English and German. American flags fly everywhere. Local anxieties stem not from the constant machinegun fire and roaring helicopters, but the possibility they may fall silent.

While Germany hosts the largest number of American soldiers in Europe, US troop numbers have halved to 38,600 over the past decade. They will drop to 24,000 under Mr Trump’s plan. Two command centres in Stuttgart, one for Europe and the other for Africa, will also be closed.

Washington blames Berlin, arguing it is not spending enough on its own defence and is too dependent on Russia through deals such as the Nord Stream 2 gas pipeline. In Germany, critics say the US move signals wavering commitment to its Nato allies, which could help Moscow sow divisions among the alliance’s members.

The fortunes of Grafenwöhr and Vilseck have been tied to the army base for a century. They grew as the German military used it in two world wars. Under the Americans, the towns boomed during the cold war, and again with the US-led invasions of Afghanistan and Iraq.

Now, locals feel their fate hinges on one man. “Suddenly, all of us are listening to what Trump has to say,” said Birgit Plössner, a historian.

Inside Grafenwöhr’s Museum of Cultural and Military History, Ms Plössner showed off the Elvis collection, including the piano he played at a secret concert. In the next room, she pointed to a map of the training base and the nearby towns. “You can’t easily tell what part is Grafenwöhr the town and what is the base,” she said. “We belong together.”

Their economic intertwining is even stronger, with the US presence worth an annual €660m to the area, according to local officials. 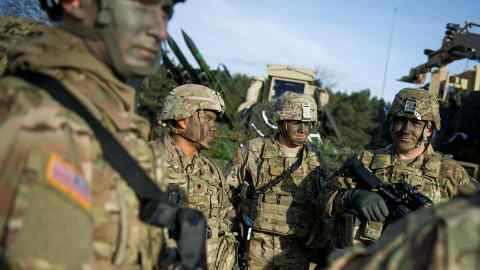 At American Nails, employee Daniel Thomas, 17, lamented that his salon could lose up to 90 per cent of its business as he gave a manicure to a young soldier who nodded sympathetically. But hesitantly, she also argued that it made financial sense to move troops out of Germany.

“A lot of this money [takes] us overseas to places we’re not really needed any more,” she said. “There’s no world war.”

Locals hope that a win for Democrat challenger Joe Biden in November’s US presidential election could reverse the trend, but some German officials warn the relationship may never go back to what it was.

Not everyone is dismayed. Rene Liebermann, a local bookseller, argued that such bases prepare troops for military interventions that many Germans do not condone. “I don’t like what they’re doing here,” he said. “They’re playing war.”

Ali Zant, a local official from the leftwing Die Linke party, dreams of closing the base altogether, and turning the 390 sq km site into a nature reserve. “Let it go back to forests and peace,” he said.

Public sentiment in Germany may support his view. Almost half of those surveyed in a recent YouGov poll agreed with a reduction of troops, while one in four backed total withdrawal.

“The cold war was a dangerous time,” said Christian Oberthür, another Die Linke official. “But it’s over.”

Vilseck councilman Peter Lehner — the childhood cereal barterer — argued such views were naive. He pointed to Nord Stream 2 and Russia’s increased military manoeuvres around the Baltic and Nordic states.

“This is still one of the foremost border lines from which the US can get to Russia,” he said. “The cold war is still here.”

Back at the Angerer Hotel, Ms Kedeker was not as concerned with geopolitics as losing the ties she believes foster an openness to the world.

“Having soldiers in our little town taught us about people of all kinds — British or American, black or white, Asian or Hispanic,” she said. “We learnt that everyone is the same. When they go, something will be missing.”