Some Positives And Negatives For Silicon Laboratories (NASDAQ:SLAB)

Home Financial news Some Positives And Negatives For Silicon Laboratories (NASDAQ:SLAB)
2020-11-222020-11-22By finanz.dk

The latest quarterly report from Silicon Laboratories (SLAB) sent mixed signals. While there was progress in some areas, the company regressed in others. Nevertheless, management is optimistic IoT will continue to drive growth going forward, possible increasing revenue by double digits as soon as 2021. However, despite the positive outlook, SLAB may not be deserving of a long position.

Q3 results beat the top end of guidance. Q3 revenue increased by 6.7% QoQ, although a decline of 1.2% in comparison to last year. Non-GAAP net income remained flat sequentially, but fell by 23.7% YoY. The bottom-line difference in terms of GAAP and non-GAAP is due primarily to a stock compensation expense of $15M and an intangible asset amortization of $12M.

Moreover, some segments did better than others. Timing devices were especially weak. But IoT revenue grew by 16% QoQ to $133M, a new all-time record. Infrastructure and automotive contributed the remaining $88M. The latter being flat and the former declining substantially with U.S. sanctions on China’s Huawei a contributing factor. This resulted in a weaker-than-expected gross margin, which declined QoQ and YoY. While IoT products boosted revenue, they also come with lower margins than infrastructure and automotive products.

However, the outlook sees revenue from infrastructure and automotive recovering with continued strength in IoT. Guidance calls for Q4 revenue of $221-231M, an increase of 3% YoY at the midpoint. Non-GAAP EPS will continue to be affected by lower margins to end up at $0.68-0.78, a decrease of 13% YoY at the midpoint.

Despite the mixed messaging in the quarterly numbers, management is upbeat about the road ahead. From the Q3 earnings call:

Looking ahead, we expect robust growth in IoT. Despite a turbulent macro environment, we delivered record IoT design wins and revenue with an acceleration of demand through the quarter.

A transcript of the Q3 2020 earnings call can be found here.

Management is particularly optimistic about IoT based on what it has seen in terms of bookings and design wins. Revenue could grow by double digits in 2021 with IoT growing by as much as 30%.

given the momentum that we see here in Q3, and continuing into Q4, we believe that we’ve got a good shot at double digit growth for the entire company next year. And certainly within IoT wireless, we talked about, a shot at 30% growth in the IoT segment next year. And that depends on the macro and a lot of other factors. And not giving formal guidance here. But those are that we look at where the business is today, we feel very confident in our ability to grow, and we’ll see what the market turns out next year as well. But very positive momentum right now in bookings. And design wins, which point in that direction.

Double-digit growth would be most welcome, especially since SLAB has been having problems with growth in recent years.

Growth at SLAB has stalled

After almost a whole decade of sustained growth, 2019 marked the first time in many years that revenue ended up lower than the year before. Revenue and EPS peaked in 2018, but the outbreak of the U.S.-China trade war in mid-2018 seems to have put the brakes on growth. Trade tensions have affected SLAB with China a major source of demand. According to SLAB’s most recent Form 10-K, 2019 revenue was $838M with China accounting for $355M or 42.4%.

SLAB has a chance to set a new record in 2020 revenue-wise if guidance is any indication. If revenue in the first three quarters was $643.7M and guidance calls for Q4 revenue to wind up at $226M, then 2020 revenue is projected to end up at $870M or just above the 2018 record of $868M. On the other hand, the bottom line is a different story as shown in the table below. It’s getting more difficult for SLAB to turn a profit. Even when revenue increased, profits have not always followed suit.

With growth effectively stalled, the stock has moved sideways as shown in the chart below. The stock is currently slightly above where is was in mid-2018. SLAB has declined by 6% YTD. In comparison, the iShares PHLX Semiconductor ETF (SOXX) is comprised of 30 semiconductor companies with SLAB included in its holdings. SOXX has gained 37% YTD. SLAB has underperformed by quite a bit. 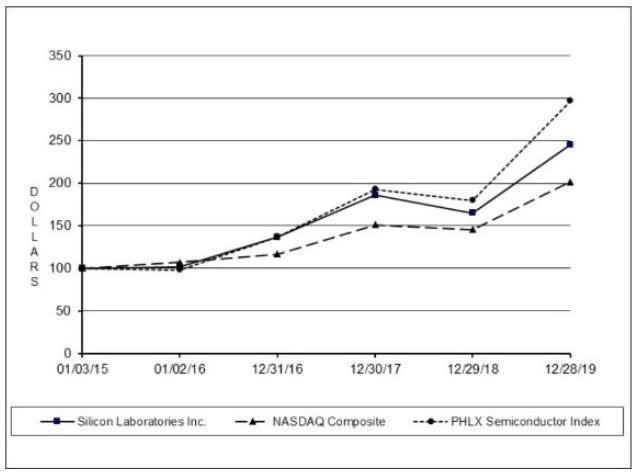 Yet despite not having rallied as much as other semiconductor stocks, SLAB is not that much cheaper in comparison. SLAB is a provider of analog and mixed-signal integrated circuits. It competes against a wide range of companies, including the likes of Analog Devices (ADI), Texas Instruments (TXN), Broadcom (AVGO), MicroChip (MCHP) and NXP Semiconductors (NXPI).

Earnings are arguably SLAB’s weak point. While SLAB compares favorably in some metrics such as its price-to-sales ratio of 5.8, it falls way short in generating EBITDA and free cash flow. Relatively low earnings causes SLAB to lose out in earnings-related metrics such as forward price-to-earnings ratio and price/earnings-to-growth ratio. SLAB does not generate profits the way many of its competitors do. Something that is set to become worse with a declining gross margin due to the shift to less profitable products like IoT as mentioned earlier. 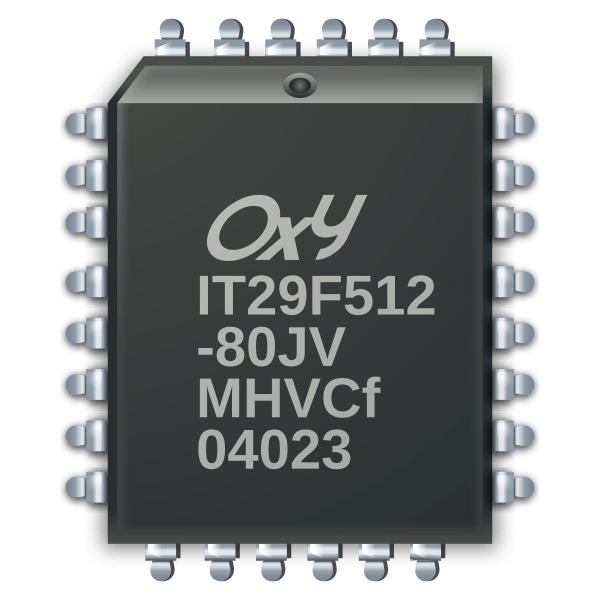 The latest quarterly numbers and guidance from SLAB contained some positives and negatives. Top-line growth seems to be recovering from the drop seen in 2019 for the first time in many years. Revenue looks primed to grow again with IoT giving growth a boost. So much so that management is optimistic SLAB could grow by double digits as soon as in 2021.

An acceleration in growth would certainly be welcome since SLAB has essentially come to a standstill for the last 2-3 years. On the other hand, the picture in terms of bottom-line growth looks much less promising. IoT products come with lower margins than say infrastructure products, which causes gross margin to go down. If this continues, SLAB will become less profitable than in years past as time goes by. An unwelcome development, especially since SLAB is banking on IoT for the future.

Yet despite having fewer profits, the stock is where it used to be in mid-2018. Back when SLAB was growing much faster and more profitable. Not having adjusted for fewer profits hurts SLAB when compared to competitors. SLAB does not come with a discount despite being much less profitable than before. SLAB looks even worse when compared to other semiconductor companies that are growing much faster and trade at lower valuations.

It will be difficult for SLAB to stand out when other companies in the industry make a more compelling argument to go long. Without attracting sufficient interest, the stock will have a difficult time finding its groove. SLAB may find buyers, but it will likely require the stock to trade at more appealing valuations than it does right now.

I am neutral on SLAB. While IoT certainly has a lot of potential, SLAB does not have a monopoly when it comes to IoT. There are other companies out there and if IoT takes off the way many expect it to, many more are likely to join the market. That means more competition, which is unlikely to help margins or profitability. SLAB may grow revenue by double digits in 2021, but that’s not much better than what others are doing while also trading at lower multiples. SLAB needs to become more profitable or the stock could have a hard time staying afloat.