Some Encouraging Signs On The Economic Front, But Beware Of The Income Cliff

In what came as a huge surprise to me, Markit’s Flash Composite Purchasing Managers’ Index rose sharply to 54.7 in mid-August, with strength reflected in both the service and manufacturing sectors. It shows the best level of business activity since before the pandemic in February of this year. New business was the driver, as manufacturing firms saw a steep increase in new orders compared to July, and service firms realized an increase in sales growth. Export orders saw the strongest sales growth, as foreign economies reopened. The rate of job creation also picked up from July. 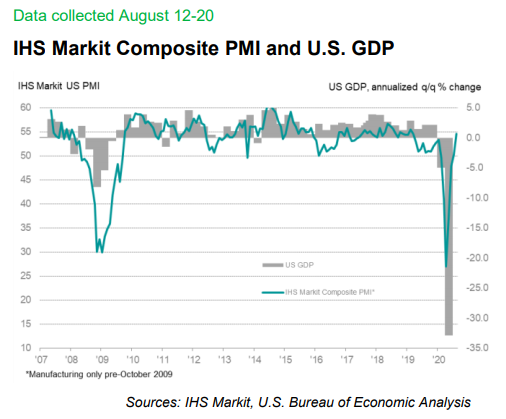 This was a lot more strength than I was expecting to see from this business survey for the month of August, and it is encouraging with respect to the second-half recovery, but the tip of the spear is consumer spending and the impact the loss of stimulus has on future numbers.

If there was pent-up demand for existing home sales, I think it was been met in July. Sales soared 24.7% to an annual rate of 5.86 million. Sales are now up 8.7% over the past year. This is one of the few sectors of the economy that has fully recovered. Record-low mortgage rates and the trend toward working from home also helped lift sales. The only headwinds appear to be elevated unemployment and limited supply, which fell to 3.1 months. Median existing home prices could pose difficulty for new home buyers, as that figure rose above 300,000 for the first time on record.

Housing starts rose 22.6% in July to an annual rate of 1.496 million, which was well above forecasts and 23.4% above levels from a year ago. Housing permit activity was just as strong. Both single-family and multi-family homes contributed. The same dynamics helping existing home sales is giving a lift to new home and apartment construction.

Initial jobless claims rose above 1 million again to 1.11 million, stalling the progress we had seen in recent weeks. Some blamed it on more people applying after President Trump temporarily increased the enhancement back to $300 per week, while others suggested it was because of the summer surge in new cases. Continuing claims fell 636,000 to 14.84 million. 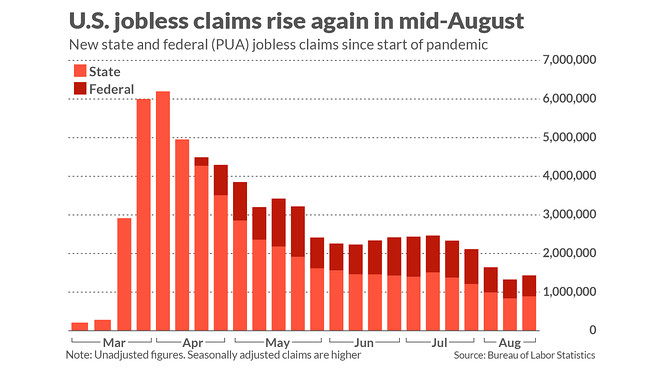 If we look at unadjusted claims, the figure was 891,000, which is still well above the 200,000 per week we were used to seeing before the pandemic. When we add the 542,000 who applied under the federal program, total claims come to 1.43 million on an unadjusted basis for the week, as can be seen above. The number of workers continuing to receive claims through either state or federal programs remains above 28 million, which is approximately 18% of the workforce.

While the housing numbers are solid, the industry no longer represents a significant enough percentage of overall economic activity to have much influence on growth. Still, it is a positive. The corporate surveys from Markit are more encouraging from an economic growth standpoint, but these are based on changes in sentiment from one month to the next. My greatest concern remains that income cliff that the economy went over in August.

The month of August will be a test for the economic recovery through the remainder of the year, because approximately 28 million unemployed stopped receiving enhanced benefits, and personal income for the month likely declined as a result. That loss of income feeds through to the small businesses that depend on both discretionary and non-discretionary spending. The remaining employees of those businesses may also be affected by the declines in business revenue. In other words, they could lose their jobs. I believe the decline in income in August is probably the reason we have started to see initial unemployment claims start to rise again.

President Trump’s $300 enhanced weekly benefit should stem the economic pain for the unemployed in those states that provide it, but it is still a loss of $1,200 per month compared to what was being received before. That loss of income will have repercussions for the rate of economic recovery between now and year-end.

Lots of services offer investment ideas, but few offer a comprehensive top-down investment strategy that helps you tactically shift your asset allocation between offense and defense. That is how The Portfolio Architect compliments other services that focus on the bottom-ups security analysis of REITs, CEFs, ETFs, dividend-paying stocks and other securities.

The Portfolio Architect was defensively positioned at the beginning of this year in anticipation of the bear market that followed, but were you? If not, consider a two-week free trial to see how it may help you be better positioned for the next major turning point in the markets.

Additional disclosure: Lawrence Fuller is the Managing Director of Fuller Asset Management, a Registered Investment Adviser. This post is for informational purposes only. There are risks involved with investing including loss of principal. Lawrence Fuller makes no explicit or implicit guarantee with respect to performance or the outcome of any investment or projections made by him or Fuller Asset Management. There is no guarantee that the goals of the strategies discussed by will be met. Information or opinions expressed may change without notice, and should not be considered recommendations to buy or sell any particular security.