SolarWinds Corporation (NYSE:SWI) reported a good Q2 with revenue and EPS both coming in ahead of expectations, which was driven by continued strong adjusted EBITDA margins. The company’s Q3 revenue guidance is for 5-7% growth, which would be a slight deceleration from Q2. We could see some upside to the company’s $0.24 EPS guidance as margin guidance implies weaker margins compared to the year ago-period, compared to some margin expansion in Q2.

In addition, the company presented a potential spin-off opportunity with their MSP business. This spin-off would look to separate the Core IT Management business from the MSP business, which I go into more detail later on. Given the stock’s recent performance over the past 6-8 weeks, I don’t believe there is much upside in the potential spin-off. Investors would need to rely on significant multiple expansion for the two separate entities, which, while possible, is a difficult bet to make, considering many tech multiples appear to be a little excessive in the current marketplace.

The stock has risen nearly 15% since the company reported earnings in August as the market appears to have appreciated the strong quarter and potential spin-off opportunity. However, the company’s current forward revenue valuation has reached 8.2x, which seems pretty high, considering revenue is growing under 10%.

Even as SWI continues to shed their license revenue and becomes a more recurring revenue-based company, it appears investors have already priced in that mix shift into current valuation. I find it difficult to see a company with revenue growing below 10% to have that high of a forward revenue valuation.

In addition, while the potential spin-off would provide two separate companies attracting different investor bases, given the different financial profiles, I find it difficult to generate incremental value from the spin-off. The Core IT Management business, which is ~70% of expected 2020 combined company revenue, would likely receive a forward revenue multiple closer to legacy IT companies given lower growth profile. That means ~70% of the combined business could see their valuation go from the current combined ~8.2x to 4-5x, more in line with legacy IT companies.

The faster-growth MSP business would likely benefit from multiple expansion, but with revenue growing at ~17% CAGR since 2018, revenue growth is likely to decelerate over time. That being said, even if the MSP multiple started off at 15x, it would only be a matter of time before the multiple starts to contract.

SolarWinds offers IT management software that helps manage and monitor an enterprise’s IT infrastructure, capable of operating in a cloud, on-premise, or hybrid environment. The company offers a suite of software for network management that operates in real-time, giving the users increased visibility for decision-making. The software has the ability to identify, diagnose, and solve network performance issues. SolarWinds offers products on a standalone basis, including software such as archiving and email protection against malware and phishing.

SolarWinds competes with a variety of other competitors offering IT infrastructure management solutions. Some of their primary competitors are larger IT vendors and network management service providers such as IBM (IBM), NetScout (NTCT), CA Technologies, and many more. There are dozens of other smaller, more localized service providers that the company also competes with.

Last quarter, SWI reported revenue growth of 8% to $246 million, which was above expectations for ~$244.5 million and was near the higher-end of management’s previous guidance range of $240-248 million. The main driver behind the company’s growth continues to be subscription revenue, which grew 21% during the quarter and now represents 39% of total revenue.

Looking forward to Q3, the company will continue to benefit from the transition to more subscription revenue. However, as the lumpy, one-time license revenue falls off, this could continue to be a headwind towards revenue growth. For example, rather than getting a $10 million license contract, SWI may get a longer-term contract worth $2 million a year. So, while they will get less of the larger one-time license revenue, this longer-term subscription revenue is more visible to the company, which tends to be a positive when it comes to valuation metrics.

With revenue guidance of $254-259 million for Q3 and consensus estimates currently sitting at ~$257 million, I believe there won’t be too much of a surprise when it comes to Q3 revenue. Growth for the quarter is guided to 4-6% on a constant currency basis, which seems possible, given the 8% growth seen last quarter, combined with the continued license revenue headwind. 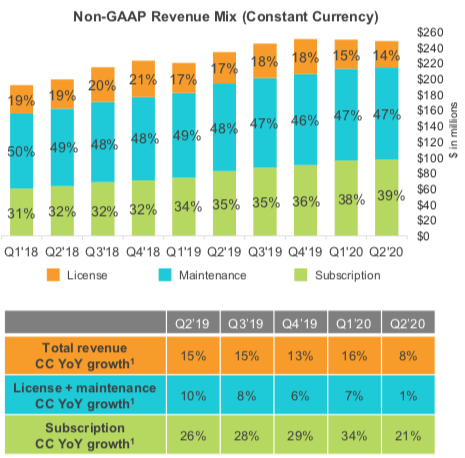 If we assume margin can remain stable compared to the year ago period in addition to revenue coming in at the midpoint of guidance, we could see upside to management’s non-GAAP EPS guidance of $0.24.

On the earnings call, the company talked about the potential spin-off of their MSP business into a newly created and separately traded public company. The MSP business, which is ~30% of the current combined company, would provide broad IT service management solutions designed to enable managed service providers to deliver outsourced IT services for small and medium-sized business end-customers. The Core IT Management business would remain with SWI and represents ~70% of the current combined company.

While this does present an opportunity for the company to generate increased shareholder value by separating the two companies, the core SWI business financials would end up looking differently than the combined company. First, the Core IT Management business would focus more on profit margins with the company noting revenue growth of low to mid single digits.

This would result in lower revenue growth, though the company would be well above the Rule of 40 mark many investors look at to evaluate software companies. This would attract investors who are more concerned with profitability and stability and would eliminate the question of revenue growth variability. In more volatile markets, the stable Core IT Management business may have a more stable valuation, albeit at a lower multiple than the current combined company.

The MSP business would likely be able to support a higher valuation, which would be more comparable to faster-growth software companies. However, as that business’s revenue growth decelerates, valuation may contract over time as investors may opt for alternative faster growing companies.

Separating the two units would be beneficial in that each new company would attract different types of investors. However, valuation for the MSP business might be under more pressure. Given the higher revenue growth, that segment may experience more volatile swings in valuation as investors may use revenue multiples for valuation. If the MSP business is not able to capture their growth opportunities, the spin-off may fall under some valuation pressure.

Since reporting earnings, the stock has been up nearly 15% as the company reported strong earnings and announced plans for a potential spin-off. The potential two new businesses would be very different with the Core IT Management business focusing more on profitability (and thus having a lower valuation multiple) and the MSP business focusing on growth opportunities (and thus, having a higher valuation multiple).

The above chart shows a few SaaS companies with similar revenue growth as well as strong profitability. IBM and NTCT are both competitors to SWI, and while their financial profiles do not necessarily match up, they compete in the same market and are often valuation comparables.

SWI has a current market cap of ~$6.75 billion, and with cash of ~$330 million and debt ~$1.9 billion, the company has a current enterprise value of ~$8.3 billion. For valuation purposes, I will take a look at two different methods.

First, on a combined basis, the company is guiding 2020 revenue of $1,008-1,018 million as assuming the company grows another 7-8% in 2021, which would be similar to 2020 growth, we could see 2021 revenue of ~$1.1 billion, which represents a ~7.5x 2021 revenue multiple. The chart above shows the company’s forward revenue multiple has typically traded between 6-8x, thus there doesn’t seem like there is much room for continued expansion.

When looking at the second method of valuation, even if the company spins off their two businesses, investors would need to see even more multiple expansion that what I outlined above. That means the faster-growing MSP business would need to get a forward revenue above 10x, and the legacy IT business would need to get a multiple above 5x. Yes, this is possible, given how tech company revenue multiples have expanded over the past few years, but I wouldn’t count on continued multiple expansion as the best method to generate alpha in this potential spin-off.

Previous PostJPMorgan Asks “What If Trump Wins?”Next PostHow I Became A Heretic To My Liberal Friends