SoftBank has been holding internal discussions on whether to relocate the unit that manages its $100bn Vision Fund from the UK to Abu Dhabi, according to multiple people with direct knowledge of the talks.

The move has been under discussion for several weeks within the Japanese technology conglomerate, these people said.

It would be driven by a number of reasons, including a desire to lower its taxes and be closer to one of the main backers of the Vision Fund, Abu Dhabi’s Mubadala sovereign investment vehicle, which has put $15bn into the technology investment fund.

Such a shift could put distance between SoftBank Investment Advisers, the unit formed in late 2016 to manage the Vision Fund, and UK regulatory oversight. The unit, which employs around 400 staff, is currently registered in the UK and run out of a townhouse in Mayfair in central London.

As part of the talks, Rajeev Misra, who runs the Vision Fund from London, is considering moving his primary residence to Abu Dhabi. According to multiple people with direct knowledge, Mr Misra was in the Gulf emirate recently looking at homes and schools for his family.

A person close to Mr Misra confirmed that SoftBank was looking at the move, but stressed that the probability of something happening would be low and that his family would not be moving. This person said that the move was primarily driven by an attempt by the Japanese conglomerate to capture a substantially lower tax rate for profits booked by SBIA.

The corporate tax rate in the UK is 19 per cent, while in Abu Dhabi it is zero per cent, with some exceptions.

Other people with knowledge of the discussions said the company had been debating the issue for months for regulatory benefits beyond reduced tax rates.

Akshay Naheta, who like Mr Misra previously worked at Deutsche Bank before eventually joining SoftBank, has already relocated to Abu Dhabi, according to people with direct knowledge of his move. 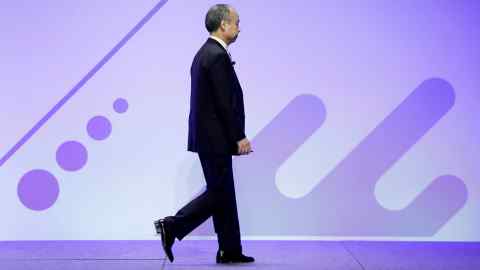 Mr Naheta was the mastermind of SoftBank’s controversial Wirecard trade. In February, the Financial Times reported that Mr Misra had been in talks to set up a hedge fund-style vehicle based in Abu Dhabi and had lined up $4bn in support from Mubadala, which in turn helped recruit interest from the government of Kazakhstan. The FT reported that fund was due to be based in Abu Dhabi and run by Mr Naheta.

In June, the FT reported Mr Naheta had been given a new executive role at SoftBank and was no longer working in SBIA under Mr Misra.

On Monday, Mr Misra was one of three SoftBank executives removed from the group’s board in response to investor calls to improve governance standards by increasing oversight by non-executive directors.

In its results, SoftBank reported that performance at the Vision Fund had improved thanks to a rally in tech stocks and also said a much smaller sequel fund had performed strongly.