Snowflake (SNOW) provides a cloud-based data platform, addressing the rising data management needs of enterprises. The company went public recently and has delivered staggering listing gains to its investors. In this report, we analyze Snowflake’s business model, competitive strength, financial position, and finally conclude with our opinion on the stock’s risk-reward investment opportunity versus its current valuation.

Headquartered in San Mateo, California, Snowflake was incorporated in 2012 as Snowflake Computing, Inc. It was listed on NYSE under the ticker “SNOW” on September 18, 2020. The company provides its customers with a cloud-based data platform that was first launched in 2014 with data warehousing as its core offering. It further expanded the product’s capability to include data engineering, data lakes, data science, data applications, and data exchange. In other words, the platform now allows customers to store, streamline, and share data as well as analyze and get meaningful business insights. Snowflake’s platform is cloud-only and operates on a public cloud infrastructure provided by Amazon Web Services (AMZN), Azure (MSFT) and Google Cloud (GOOGL).

The company derives revenue from the sources below:

Overall, the company had 3,117 customers as of July 2020, out of these, 56 customers contributed more than $1M each to product revenue during the last 12 months. Capital One (COF) accounted for 11% of FY 2020 revenue. The company’s notable customers include Adobe (ADBE), Netflix (NFLX), ConAgra Foods (CAG), Logitech (LOGI), Yamaha, among others. While the company does have a global footprint, it derives the majority of its revenue (85%) from customers within United States.

As a society, we are producing more data than ever due to the adoption of IoT (the Internet of Things), AI (Artificial Intelligence) and digitization. Additionally, the type of data collected is becoming more complex. Each day over 2.5 quintillion bytes of data is generated. Data across an organization’s internal and external ecosystems, if used efficiently, can help companies facilitate informed decision-making, boost productivity, minimize data movement and data duplication.

Furthermore, “data silo” is another challenge that needs to be addressed. Often data is stored separately by different departments or branches within the same organization. This leads to lower integration, difficulty in automation, and in turn provides a limited view of the organization for decision-making purposes. A central data repository allows companies to make data easily accessible and run analytics to derive meaningful insights. This can be achieved with the use of data warehouses or data lakes.

Snowflake estimates the total addressable market for its cloud data platform at approximately $81B as of January 2020. While, as per IDC, the total addressable market is expected to reach $56B at the end of 2020 and is expected to reach $84B by 2023, growing at a CAGR of ~14.5%. Even based on IDC’s lower estimate of $56B, market penetration stands at less than 1%. Said differently, Snowflake has enormous room for growth.

Strong product execution by the company

Snowflake provides a single, fully integrated platform that handles multiple workloads and can integrate data across three major public clouds as well as regions. The company’s architecture has three separate layers for storage, compute, and cloud services, thus separating compute from storage and allowing customers the ability to scale these functions independently as per their requirements. This is a big deal as compared to current/legacy data cloud infrastructure which was not designed with the continuing cloud-based digital revolution and massive growth in data creation, in mind.

Cloud-native architecture also allows for improved scalability and flexibility. The Snowflake platform eliminates the problem of data silos by keeping all data at a centralized location which is easily accessible, when needed. The platform also automates multiple tasks, thus requiring low management interference. Secure and smooth real-time data transfer between Snowflake’s customers is also an add-on worth noting.

According to a 2020 Forrester TEI study (which was commissioned by Snowflake), customers can achieve an ROI (return on investment) of 612% over a 3-year period by using the company’s solutions. More informed decision-making plus more simplified and productive operations are the primary drivers of this ROI. Below are the details on the sources of benefits that led to 612% customer ROI in the Forrester TEI research.

Not surprisingly, the company has a Net Promoter Score (NPS) of 74 which is significantly high relative to the average NPS of 21 among technology vendors. Moreover, Snowflake has a high net retention rate of 158%. This indicates that the company has been able to derive greater revenue from existing customers due to increasing adoption of the offerings with more data and workloads migrating to the company’s platform. Another very good sign for Snowflake.

In addition to the advantages and usability discussed earlier, Snowflake also provides easy shareability of data between Snowflake customers. If you are a Snowflake customer, you can easily grant governed access to your data to other Snowflake customers. Moreover, the company has a data marketplace where providers can list their data-sets which can be subscribed to by Snowflake users. Notable providers of data on Snowflake’s platform include S&P Global, Starschema, Factset, IP qwery, and northDash, among others.

As the number of customers & data providers grow on the platform, more data will become available for purchase and/or sharing (with other customers and data providers), thus leading to an expanding value proposition over time.

Snowflake participates in a fiercely competitive industry. It is also in a unique position as its enablers are also its competitors. While its platform operates on the public cloud infrastructure provided by AWS, Azure, and Google Cloud, it also competes with the data warehousing and analytics offerings of these large public cloud providers including Amazon’s Redshift, Google’s BigQuery, and Microsoft’s Synapse.

The offerings of these big cloud vendors are highly competitive and have been improving consistently. For instance, Microsoft launched Synapse in November 2019 by evolving its previous Azure SQL Data Warehouse with notable improvements. Similarly, in December 2019, AWS introduced Redshift RA3 nodes which allowed users to separate the compute and the storage functions and scale them independently just like Snowflake.

The company also competes with multiple traditional data warehouses that provide on-premise data storage solutions, however it has a competitive edge over these legacy offerings as unlike cloud data warehouses, on-premise solutions are hard to scale up and down, have high fixed costs and require more maintenance.

Overall, we believe that the market for cloud data platforms is large and underpenetrated. Therefore, there is space for the frontline companies to grow together. Having said that, we are concerned about Snowflake having to compete with large, highly resourceful companies that are vertically integrated and can alter the ground rules to the detriment of independent, specialized players such as Snowflake. Even assuming Snowflake is able to create a sustained product advantage, the company will face pressure to spend on R&D, sales and marketing to counter the spending power of the big 3 cloud infrastructure providers. We believe competitive dynamics in the space are critical to follow for any investor in Snowflake.

The company has delivered tremendous revenue growth in the recent quarters driven by the increased use of its platform by existing customers as well as the continued addition of new customers. Twelve-training-months (“TTM”) revenue growth was 138% with a net retention rate exceeding 150%. Both customer base and revenue have grown by triple-digits in recent quarters as evident in the chart below, however, the growth while still strong in absolute terms, is starting to “slow” sequentially as the law of large numbers comes into play.

Similarly, Remaining Performance Obligation (RPO) has also grown significantly in recent quarters. RPO was up 211% in Q2 2021 on a year-over-year (YoY) basis and 47% on a quarter-over-quarter (QoQ) basis. RPO represents deferred revenue and non-cancelable multi-year contracted amount which is expected to be recognized as revenue in the future. The weighted average life of long-term contracts is 2.7 years as of Q2 2021. The company is also seeing strong demand from large customers. The number of customers that contributed more than $1M to product revenue in the last 12 months grew from 22 in Q2 2020 to 56 in Q2 2021 (up 155%).

Margins still negative as the company invests for the future

Snowflake’s very strong top-line performance has come at the cost of negative margins. The company’s TTM operating margin was -87%, however these large losses have primarily been due to heavy investment in marketing and R&D activities as the company aims to increase its market share and invest in product innovation. However, as we can see below, OPEX (operating expenditure) has been falling consistently each quarter as a percent of revenue due to increasing revenue and some operating leverage. Total OPEX as a percent of revenue has fallen from 211% in Q2 2020 to 120% in Q2 2021.

Similarly, the company has also shown strong improvement in gross profit margin as it improves its pricing power as well as realizes economies of scale.

Finally, the IPO proceeds will allow the company to support ongoing business operations, as well as provide enough growth capital to support expenditures on product innovation and development, or even to make acquisitions to expand its offerings.

Snowflake shares are trading at a Price-to-Sales ratio of 182.1 times which is rare even in the technology space known for premium valuations. Below are the companies that operate within the same industry and offer above-average growth. We believe any mild disappointment can lead to significant volatility in Snowflake shares at these valuations.

For more perspective, we’ve sharing more metrics (such as historical price-to-sales ranges) on additional popular growth stocks (i.e. those with at least 20% expected sales growth for next year), in the following table. 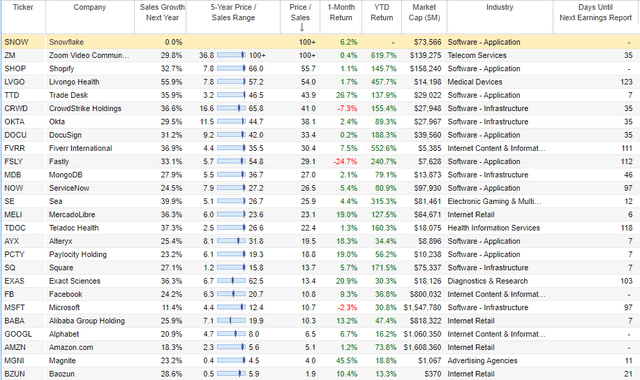 In our view, and despite Snowflake’s very attractive qualities, the current high valuation metrics gives us pause—despite the attractiveness of the business.

Competition: Snowflake operates in a fiercely competitive industry with rapidly changing technology. Moreover, Snowflake’s competitors are much more resourced and control large parts of the supply chain which could make them formidable in the future even with a less superior product than Snowflake.

Valuation: Again, Snowflake’s current valuation is lofty-even in relation to its tremendous (although not guaranteed) growth potential. Our earlier Stock Rover table show that Snowflake’s valuation is unusually high as compared to other top growth stocks.

Snowflake is clearly seeing strong topline trends as it benefits from a superior product in a large and growing addressable market. Having said that, we can only rank it as an “honorable mention” on our recent top 10 growth stocks list because growing competition (from much larger competitors) and rich valuation multiples (even for a very high growth stock) temper our optimism somewhat. We are waiting for at least a couple quarters of operating as a publicly-traded company (and hopefully a better entry price/valuation) before we get more constructive on the name. For the time being, we believe there are better risk-reward opportunities elsewhere.

If you liked this article, please consider following me. You can learn more about who I am and what I offer here.

Disclosure: I am/we are long MSFT, AMZN, GOOGl. I wrote this article myself, and it expresses my own opinions. I am not receiving compensation for it. I have no business relationship with any company whose stock is mentioned in this article.