Smartsheet (NYSE:SMAR) reported better than expected Q1 revenue growth a few weeks ago with EPS also above expectations. However, billings growth of only 30% was significantly lower than the 58% last quarter. Since then, investors have started to question the longer-term growth prospects of the company.

Q2 guidance includes revenue growth decelerating to only 33-35%. Bigger than that, billings growth is expected to decelerate to only 15-17% growth, which could result in only 20% billings growth for the first half of the year, much lower than the company’s usual trend of 50%+ growth.

Lower than expected billings can cause future revenue growth even more challenging to attain. Especially with the stock trading at ~14x forward revenue, investors should feel confident about future revenue growth when paying that expensive of a multiple to own a stock. While the company could be faced with some near-term challenges due to lower bookings, the longer-term outlook for the company far outweighs the potential bumpy road ahead.

The stock initially went down around 25% after reporting earnings a few weeks ago. However, the stock started to recover some of the losses. In recent weeks, investors have seemed to turn a cold shoulder to the name, with the stock now traded near $45.

Investors should consider two main factors before putting more money to work. First, the billings growth slowdown could ultimately impact revenue growth over the next several quarters. The company noted they have nearly 30% SMB exposure to their ARR, which means, if the economy recovers slowly, SMAR’s SMB exposure could be slow to recover business spending.

Second, valuation is starting to look more attractive at ~14x forward revenue. Even if revenue growth slows down over the next few quarters, it seems like this is already priced into the stock and into current valuation. In my opinion, this could help over the long term if revenue growth returns to historical levels, as this could be a catalyst to push valuation higher.

With the stock now trading close to $45, I believe investors could be well positioned for the company’s upcoming earnings.

SMAR helps companies enable more efficient work execution by helping employees plan, organize, manage, and automate their work tasks. SMAR helps their customers gain access to their accounts online via the web or mobile application. As businesses continue to grow and develop more complex data files, the need to properly store, organize, and manage these becomes all the more important.

SMAR has been able to rapidly grow revenues because of the underlying transition from on-premise methods of data organization to cloud-based applications. By moving these efforts to the cloud, customers have more optionality and flexibility in how they manage, organize, and present their data. In addition, the transition to the cloud means customers will spend less on internal infrastructure building and more on third-party application providers, such as SMAR. This trend is likely to continue, and as companies continue to grow in size, complexity, and global reach, SMAR’s TAM will expand with additional revenue following.

Q2 Could Shape Up As Better Quarter

During Q1, revenue grew 52% to $85.5 million, which was above expectations for ~$81 million and above management’s guidance range of $82-83 million. In a disappointing fashion, billings only grew 30% during the quarter, down from the 58% growth seen last quarter.

Investors will look very closely at billings growth during the upcoming quarter, as billings are a great indicator for future revenue growth. Given the disappointment last quarter and lower than expected guidance, the bar seems to be set pretty low for the company. SMAR may have added a bit of conservatism into their guidance metrics in order to not disappoint the investment community two quarters in a row.

In addition, the economic environment, while still a bit choppy and uncertain, has recovered a bit, and businesses seem to be operating smoothly in a work from home environment. After the initial wave of fear caused many businesses to stop their capital spending, the current environment is more conducive to billings and contracts picking back up. Said another way, companies are doing much better working from home now and will continue to improve going forward. Thus, there is a higher level of confidence that business capital expenditures can start to occur at more normalized levels.

In addition, Q1 saw operating margins of -16%, and while they improved from -25% from the year ago period, investors will look for continued expansion going forward. SMAR benefits from having a high-software subscription model with low product costs. As the company continues to gain scale, they will be able to better leverage their operating expenses and expand margins. Q2 will also have less immediate expenses related to the global pandemic, which negatively impacted margins last quarter. 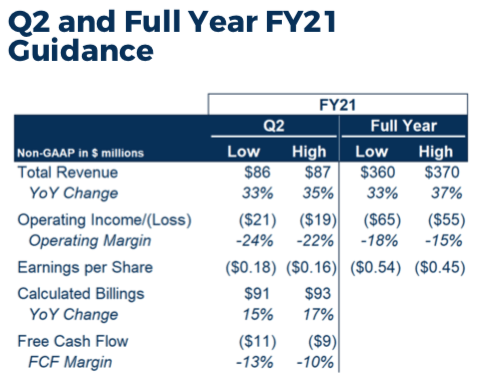 Q2 guidance includes revenue of $86-87 million, representing growth of 33-35%. While the company has a history of growing revenue 50%+, billings growth of only 30% during the quarter makes it even more challenging to maintain that high level of growth. In addition, billings growth, which already decelerated meaningfully in Q1, is only expected to be 15-17% during Q2.

While the market continues to remain volatile, there have been some clear winners from the global pandemic and the transition to a work from home model. Many investors had confidence in SMAR. However, the company’s lower than expected billings growth during Q1 and low billings guidance in Q2 could suggest SMAR’s revenue comes under pressure during the year.

The company’s stock was up nearly 30% YTD prior to reporting earnings, and immediately following earnings, the stock dropped ~25%. However, over the past few weeks, the stock has recovered most of their losses and is now down only 10% from pre-earnings highs and remains up over 15% YTD.

Given the quick recovery after reporting discouraging billings growth for Q1 and Q2, investors should start to question the company’s valuation and ability to achieve their revenue growth for the year. If the company were to achieve their billings targets for Q2, this could mean billings only grow ~20% during the first half of the year, significantly lower than recent quarters of 50%+ growth.

SMAR has a current market cap of ~$5.50 billion, and with ~$545 million of cash/investments and no debt, the company has a current enterprise value of ~$5.00 billion.

While management lowered FY21 guidance, I believe there could be some level of conservatism, given the company is not likely looking to lower guidance more than once during the year. However, the low billings growth for the first two quarters of the year makes full year revenue growth even more challenging to exceed than before.

Even though the company beat revenue expectations for the past quarter, the company also reported billings growth well below expectations and guided to a significant slowdown in billings. Management noted they saw softness from their SMB customers, which represent nearly 30% of their ARR. The global pandemic has been especially challenging for smaller businesses, and given SMAR’s exposure, the company’s revenue stream may continue to be under pressure over the next several quarters as SMBs slowly recover.

On the contrary, the lower travel expenses and more digital-focused sales force may help margins improve during the near term. The company’s revenue growth could remain under pressure as enterprises of all sizes continue to recover, though a longer than expected business recovery may put increased pressure on SMAR’s recovery pace as well.

I believe investors should start to focus more on valuation with the stock trading near $45. Yes, revenue and billings growth could be under some pressure for the next few quarters, but it seems like this is already priced into the stock. Longer-term investors should continue to look to buy the dip as valuation is starting to become attractive ahead of the company’s Q2 earnings.

Risks to SMAR include continued billings growth deceleration, which could ultimately lead to revenue growth slowing down. Given the company has nearly 30% SMB exposure to their ARR, a longer than expected recovery could place increased revenue pressure as well.