When either trading or investing in the financial markets, we believe the key is to be able to put oneself in positions where there is limited downside but yet significant upside. This is one of the iron-clad rules of being able to successfully trade the financial markets. The trader/investor who can do this consistently automatically stacks the odds in his favour in a very big way.

One such stock which may be a candidate for what we are looking for (small downside risk but significant upside potential) is SM Energy Company (NYSE:SM) which operates in the energy sector. We actually wrote about SM Energy in December of last year when we actually took a bullish stance on the stock. At the time, we were actually looking for a double bottom reversal pattern to play itself out. Suffice it to say, the reversal pattern never materialised, and shares are now down 80%+ since that article (current price is $1.61).

Shares finally bottomed in March of this year just above the $1 level before more than quadrupling in price to hit $6+ a share in just the space of a few months. Shares, though, couldn’t keep the momentum going, and it now looks like we will revisit those March lows shortly unless we can confirm a clear change in trend.

In fact, as we can see from the chart below, price will need to convincingly break above that down-cycle daily trend line before a bullish trend can begin. 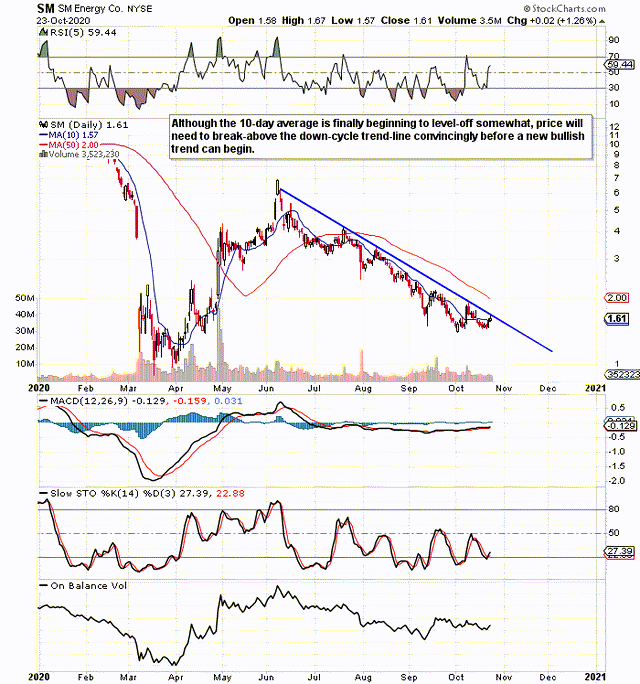 Despite not being profitable at present, SM Energy’s present valuation remains compelling. Trading with a book multiple of 0.08, a sales multiple of 0.14, and a cash/flow multiple of 0.23, shares have never been this cheap. Despite posting -$0.15 in earnings in the most recent second quarter, the firm still managed to generate $114 million in operating cash flow. This means $777 million of operating cash flow was generated over the past four quarters, which gives rise to the ultra-low cash flow multiple (current market cap is $184 million).

What investors need to take into account here is that, despite the negative EPS number in Q2, SM Energy still managed to generate $108 million of free cash flow over the first 6 months of the year as well as reduce the long-term debt by $219 million. Reported liquidity came in at $865 million. Yes, many will point to how leveraged SM Energy’s balance sheet is, but its debt is well covered by its assets on hand. In the Q2 report, $5.267 billion of assets were reported on the balance sheet versus $2.98 billion of combined liabilities (of which $2.456 billion was reported as long-term debt). Suffice it to say, the balance sheet at present has the same amount of equity ($2.28 billion) as the end of fiscal 2014 when shares were trading close to $40 a share. 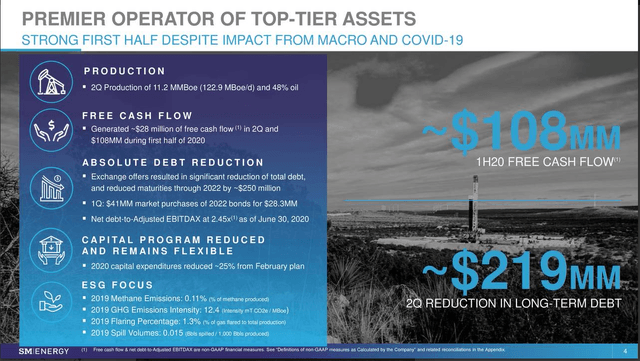 In late February and March of this year, plenty of insider buying took place at prices well north of the current share price. Plenty of buying went on between the $5 and $7 level from the CEO and CFO in these months which obviously mean that they saw value at these prices.

The reason being is that, for every dollar invested in this stock, the investor receives $12.50 worth of its assets at present. This number is really attractive when compared to the sector in earnest and especially when we see the success of SM’s wells in the Midland basis not to mind how costs have been improving in South Texas. We have seen what the company’s assets have returned in the past (2014, 2018, etc.) under the right conditions. There is no reason to believe why they can’t return solid numbers once more.

In terms of strategy, our objective here would be to keep positions small to control risk as much as possible. Considering the upside in this stock, there is no need to push the boat out with respect to position-sizing. With third quarter earnings numbers expected next week, a positive report could easily send shares above that down-cycle trend line. In any event, our play here would be a small position initially followed by a larger position if indeed we get a post-earnings breakout.

Therefore, to sum up, SM Energy definitely attracts us due to its ultra-low valuation as well as its continued ability to generate positive cash flow from its operations. Let’s see what the third quarter brings and see if we can finally break out to the upside.

Disclosure: I/we have no positions in any stocks mentioned, but may initiate a long position in SM over the next 72 hours. I wrote this article myself, and it expresses my own opinions. I am not receiving compensation for it (other than from Seeking Alpha). I have no business relationship with any company whose stock is mentioned in this article.