One of the hardest-hit industries during the recent coronavirus crisis was oil & gas, which saw demand plummeting to an extent never seen at any other point in history. This, obviously, was a nightmare scenario for many of the small companies, such as SM Energy (SM), which I have previously warned was quite vulnerable. Whilst on the surface the company’s desirable results for the first quarter of 2020 may make this look premature, when digging deeper it is still a risky contrarian investment for investors looking to capitalize on any recovery.

Thankfully, the graphs largely speak for themselves, with the first two graphs included below summarizing the company’s cash flows and debt from the last quarter and previous seven years.

The first aspect that I desire from a potential contrarian investment is evidence that their operations are fundamentally viable outside of a downturn. If they were not fundamentally viable when operating conditions were broadly normal, then their ability to survive a downturn becomes questionable. It also significantly diminishes their overall attractiveness, as I believe that the best contrarian investments are in companies that are desirable in the long term, which means they have a higher intrinsic value and thus not simply relying on the greater fool theory. Although different investors will likely have different ways to ascertain this aspect, my preference for an established company is to review their free cash flow performance across time throughout different operating conditions.

If an established company has displayed no ability to generate free cash flow, then I deem them unlikely to be fundamentally viable. This is especially applicable for an oil & gas company, since continuous negative free cash flow will eventually bankrupt them due to the capital intensity and field decline of their industry. When compiling my previous analysis, it was noted that SM Energy has never produced free cash flow throughout 2013-2019, which casts significant doubts across its fundamental viability. Whilst the company was able to generate $79 million of free cash flow during the first quarter of 2020, this was largely due to the temporary benefits of its hedging, coupled with a massive 44.13% decrease in capital expenditure year on year.

When looking towards the future, I remain skeptical regarding the company’s ability to consistently generate free cash flow in the medium to long term, despite its short-term success. This may continue in the short term, since its forecast capital expenditure for 2020 is seeing a further 20% reduction to $670 million at the midpoint. Considering the very high capital intensity of its industry, natural field decline and that changes in the company’s capital expenditure have always been approximately equal to changes in its operating cash flow, it seems risky to believe that this suddenly marks the beginning of a new era.

Whilst SM Energy’s hedges were of significant help during the first quarter of 2020, these are only a short-term solution to the current downturn. Even if the company can sustain its low capital expenditure, to sustain its recent operating cash flow in the medium to long term, operating conditions will have to recover. This should eventuate one day, however, investors should remember that the road may still be lengthy, as the coronavirus is still a real and current risk. The lockdowns may be starting to ease in the United States and other Western countries, but global cases are still increasing overall and successive waves could transpire, since there is still no vaccine.

Given that SM Energy’s free cash flow has never been positive for an entire year, it stands to reason that its net debt has also expanded throughout this time period. Whilst it decreased slightly during the first quarter of 2020, as subsequently discussed it still sits at a formidable level and thus increases the risks to this potential contrarian investment, even in the unlikely situation that its free cash flow has finally turned a corner. Even though the company actually produced free cash flow, its cash balance at the end of the first quarter of 2020 was still only an almost non-existent $15,000, which, as subsequently explained, constricts its liquidity and further increases the associated investment risks.

Since the company’s free cash flow has never been positive on an annual basis, its overall financial position plays an important role in determining its suitability as a contrarian investment. The two graphs included below summarizes SM Energy’s financial position from the last quarter and previous three to seven years. 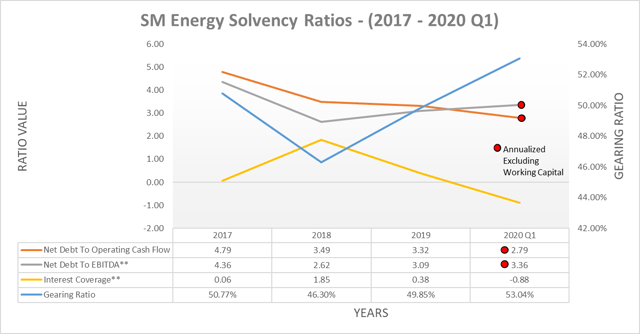 After reviewing these financial metrics, the company’s high leverage easily becomes apparent, which is primarily evidenced by its gearing ratio of 53.04% and interest coverage of negative 0.88. Whilst the recent downturn can be blamed for the latter turning negative, it nonetheless was still very low even at the end of 2019 with a result of 0.38. This indicates that the company was already struggling to service its debt burden even during broadly normal operating conditions. SM Energy’s gains and losses on hedging derivatives were purposely excluded to reflect the true underlying earnings capacity of its assets, as hedges are only temporary and the true quality of its assets will ultimately determine the company’s long-term success.

Even if SM Energy were able to generate free cash flow consistently going into the future, the company would still remain vulnerable to its leverage until it at least halved its net debt, and thus, this increases the already high risks of this contrarian investment. Deleveraging would unfortunately still not be a quick process, even if the company were to continue generating the same $79 million of free cash flow in every quarter as it did during the first quarter of 2020, as it would still take approximately four years to achieve. 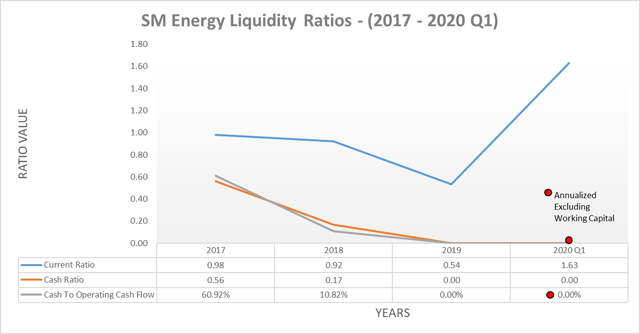 When publishing my previous analysis, I criticized SM Energy’s poor liquidity, and whilst its current ratio soaring to 1.63 during the first quarter of 2020 may appear to negate this finding, under the surface its situation is not nearly as rosy. This primarily stems from the company’s aforementioned virtually non-existent cash balance that leaves it completely reliant on its credit facility, which is less than ideal. Even though the company still retains a large $1.028 billion of undrawn capacity, this could be altered lower in the future as was recently done when its borrowing base was reduced from $1.6 billion to $1.1 billion.

The final area of concern has been its wave of approaching debt maturities, as the graph included below displays. Whilst SM Energy has recently been able to refinance some of its debt, it certainly has not come cheaply with a 10% coupon rate. Seeing as debt markets seem to be adequately supportive, it seems as though the company may be capable of continuing to kick the proverbial can down the road and thus remain a going concern throughout this downturn, but the risks are certainly elevated.

Following the historic oil price crash since publishing my previous analysis, many investors still looking at the oil & gas industry are likely seeking contrarian investment opportunities. Since there are uncertainties surrounding whether this is the beginning of a recovery and this is a fundamentally unattractive company, I would prefer to look elsewhere, such as Enerplus (ERF), which I recently analyzed. When all of these factors are combined, I believe that a Neutral rating is appropriate for SM Energy.

Notes: Unless specified otherwise, all figures in this article were taken from SM Energy’s SEC filings, all calculated figures were performed by the author.