We are growing increasingly confident that the U.S. economy has passed the deflationary phase of the economic cycle and is heading firmly for stagflation. This should see metals prices move higher as equity prices move lower. We continue to see silver as best placed to benefit from this transition and see the iShares Silver Trust ETF (NYSEARCA:SLV) doubling relative to the SP500 over the next 12 months. 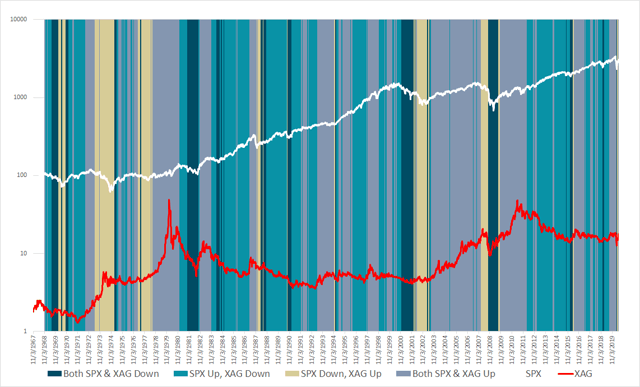 The failure of silver to act as a safe haven during the March crisis should not be taken as a sign that the metal is a poor hedge against equity bear markets. The March shock reflected a perfect storm of deflationary forces, with positive feedback loops triggering self-reinforcing dollar strength and deflation pressures. These forces now appear to have gone into reverse and their self-reinforcing nature suggests that price pressures could be about to surge.

Money Demand: The demand for dollars in times of crisis tends to be a positive function of its price, meaning that when the dollar rose in March, demand for it rose as those in debt were forced to find dollars to pay debts back and those not in debt demanded dollars as a store of value. These forces now appear to be going in reverse. We have seen the dollar weaken across the board over the past two months and the more it weakens, the greater the likelihood that such weakness reduces the value of the dollar as a store of value. The extreme weakness we saw in the dollar in 2011 reflected a complete shift in behavior among investors from believing the dollar would continue to rise in 2009 to believing it would perpetually fall.

Money Supply: Another factor explaining the March deflation shock is the negative price elasticity of money supply. As the price of the dollar rose and deflation took hold, the banking system reduced the supply of new loans, adding fuel to the deflationary fire. Meanwhile, it took some time for the Fed to react to the deflationary forces and increase the money supply and extend swap lines to boost liquidity. However, these actions have now been taken and money supply growth is likely to be a positive function of price on the upside. As inflation rises banking sector loans become more attractive boosting private sector money creation, while government spending rises as higher prices cause the budget deficit to widen and debt issuance to increase. See ‘The Inflation/Deflation Debate: Taking The Over’.

Runaway Inflation Is The Inevitable Endgame

It is important to bear in mind that despite the second deepest drop in consumer prices in the past 60 years, the consumer price index is only down 1.2% from its peak and remains up on a year-on-year basis. The larger inflationary forces in the form of government spending and debt monetization were merely temporarily overwhelmed by the greatest economic shocks since the Great Depression.

With lockdowns easing and the U.S. Treasury and Fed continuing to issue and monetize debt at record pace, we expect the return of inflation to come with a vengeance. The Treasury has zero credible means to narrow its deficit while the Fed has zero plans to resist debt monetization given its twin goals of preventing deflation and keeping asset prices elevated indefinitely. There is simply no incentive for policymakers to tighten on either front until inflation rears its head, making the inevitable endgame.

The failure of inflation to rise despite a surge in the money supply has led many economists to conclude that this reflects a fall in money velocity which suggests that price pressures will remain low. In reality, as explained here what the ratio of M2 over nominal GDP really shows is that people have been willing to hoard money, preventing money from losing its value. To argue that a falling M2/GDP ratio means there will not be inflation is like arguing that the bigger and blacker the raincloud gets the less likely it is to rain. The rise in demand to hoard money is the reason we have not seen high inflation but this is a necessary but not sufficient condition; necessary because without it we would likely have seen a surge in inflation, and not sufficient as even if it remains intact it could be overwhelmed by further money printing.

Inflation Is Bad News For Stocks

The U.S. equity bull market remains intact for now, with many valuation measures becoming even more stretched as a result of the fall in sales, earnings, and GDP. Low inflation has actually benefited stocks over recent years, allowing interest rates to decline and causing speculative demand for U.S. stocks to increase. This has left U.S. equity valuations at or near their most extreme ever and highly susceptible to declines.

Inflation tends to be associated with declines in equity valuations as outlined in ‘SP500: Low Bond Yields Do Not Justify High Equity Valuations’. While there are many numerous explanations for this, we believe the main reason is that expansionary fiscal and monetary policies in the prior years create simultaneous inflation potential and extreme equity valuations. Policymakers tend to juice growth and asset values at the expense of real wealth creation up until a point where rising inflation sends them a signal to engage in tighter policy. While it may appear as though bear markets result from the implementation of policy tightening, the ultimate cause is the valuation extremes and weak growth outlook that the prior easy policy foster.

With this in mind, any attempt by the Fed to keep monetary policy easy in a bid to support equities is likely to prove counterproductive. The more the Fed looks to prevent market declines via easing measures, the more likely it is that it will further undermine wealth creation, resulting in greater inflation pressure and equity valuation contraction. While we do believe that policymakers can and will prevent the type of nominal equity market crash seen during the great depression, any positive impact they have in nominal terms is likely to be offset by higher inflation and higher commodities and precious metals prices.

As the Treasury and Fed continue monetizing debt and keep real interest rates low to the detriment of real GDP growth, inflation pressures should begin to show up in commodity prices. While we expect commodity prices to perform well across the board, we continue to favor silver for three reasons. Firstly, low storage costs mean that it is favorable to industrial or agricultural commodities over the long term (the continuous commodity index has lost roughly 2.2% per year over the past two decades due to commodity curve contango largely reflecting storage costs). Secondly, the metal is still undervalued relative to the average of gold and the commodity complex as the chart below shows. Thirdly, silver tends to outperform gold during periods of high inflation. 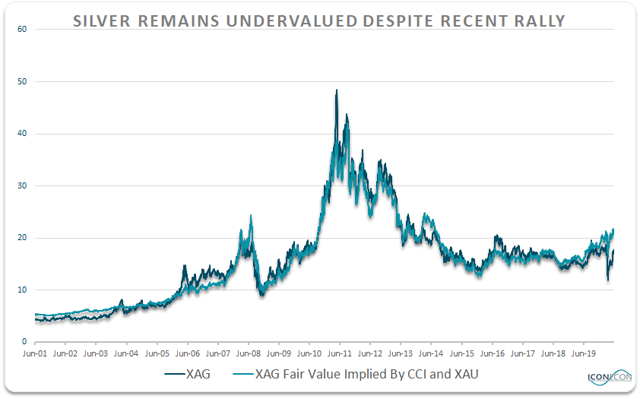 Baltimore officials estimated the city’s costs from 2015 riots at USD20mn and the current episode could end up costing multiples of this figure when the dust settles and the costs are added up. Furthermore, the destruction of productive assets means that rather than a one-off cost the economic damage will spread over several months and quarters. Perhaps the most important impact, however, is the further damage delivered to U.S. citizens trust in the country’s institutions; the media, the police, and the government. As obedience towards the country’s institutions declines, it is worth bearing in mind that monetary obedience – the willingness of the population to accept fiat currency as a store of wealth despite it having no intrinsic value, is not something that can be taken for granted.

Disclosure: I am/we are long SLV. I wrote this article myself, and it expresses my own opinions. I am not receiving compensation for it (other than from Seeking Alpha). I have no business relationship with any company whose stock is mentioned in this article.