“What better way for a ruling class to claim and hold power than to pose as the defenders of the nation.” – Christopher Hitchens, Thomas Paine’s Rights of Man: A Biography

Today, we look at a small tech company that has made several strategic acquisitions, still looks somewhat undervalued on an earnings basis, and has seen some recent insider buying as well. 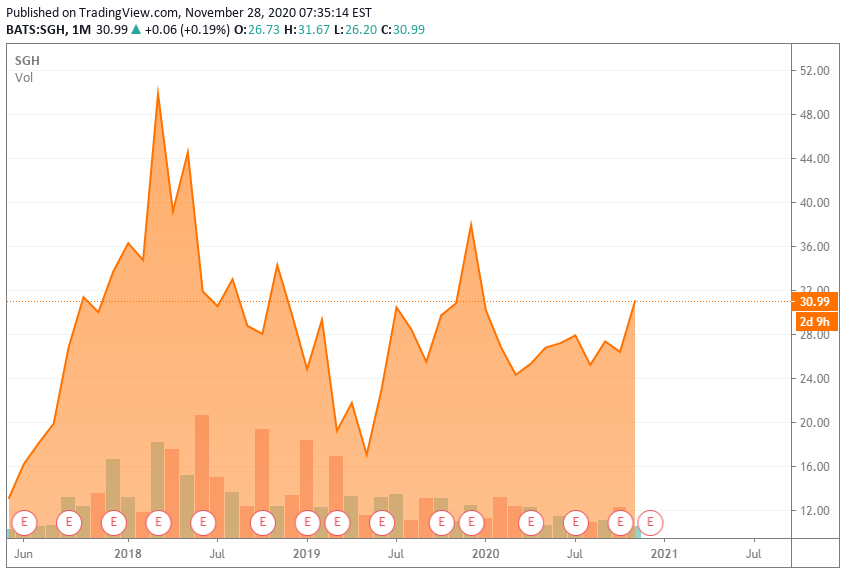 SMART Global Holdings, Inc. (SGH) is a Cayman Islands domiciled and Newark, California, headquartered manufacturer of electronic products with a focus on memory, storage, and computing technology, which are sold to global OEMs, governments, and other end customers globally. The company essentially customizes memory chips supplied by the likes of Intel (INTC) and Micron (MU) into application-specific products for its end users. SMART Global was formed in 1988, purchased by private equity outfit Silver Lake Partners in 2011, and went public in 2017, raising $61.1 million at $11 per share.

It has since grown through three acquisitions, recently announcing a fourth – the purchase of Cree (CREE) LED Products business on October 19, 2020. Shares trade for right at $31.00 a share and sport an approximate $750 million market cap. SMART Global operates on a fiscal year (FY) ending on the last Friday in August.

The Brazil (or Smart Brazil) business produces DRAM, flash, and mobile memory products for use in mobile phones and servers, taking advantage of the country’s manufacturing incentives. SMART Global is the leading manufacturer of memory products in the country, but owing to a number of headwinds – more on these shortly – revenue from this geography/sector has declined by more than half since FY18 when it represented 62% of the company’s total net sales. In FY20, Brazil accounted for gross profit of $70.7 million on revenue of $389.4 million, representing 35% of the SMART Global’s top line.

SMART Global’s manufacturing presence in Brazil was in large part due to a subsidy program where its customers received tax benefits up to 28% of gross sales for using Brazilian-made memory in the products it sold in Brazil. This subsidy allowed the company to realize significant margins versus the otherwise commoditized memory market. In essence, SMART Brazil would purchase chips on the international market, package them in Brazil, and sell them at inflated premiums to OEMs that sought the 28% subsidy. However, in 2018, the WTO ruled that Brazil’s program was anti-competitive, compelling the government to restructure its incentive in July 2019. The new subsidy allocates points based on which aspects of the manufacturing process occur in Brazil, which no longer allows an OEM to just purchase memory chips from SMART Brazil to qualify for the subsidy.

Management saw the writing on the wall, purchasing Penguin Computing, a provider of compute and storage solutions targeting applications in AI, ML, and HPC, contemporaneous to the WTO ruling in 2018. In return for $45.1 million, SMART Global received the second largest supplier of HPC in North America. HPC was a $27.6 billion market in 2018 and is expected to expand to $39.3 billion by 2023. The company then reentered the $8.4 billion embedded computing market – a business it had abandoned in 2010 – by executing two acquisitions in July 2019, shortly after the new subsidy point system was implemented in Brazil. For a combined price tag of $76.1 million, SMART Global acquired Artesyn Embedded Computing and Inforce Computing. The three additions comprise the now highest margin SCSS segment and the company’s first step in its diversification away from Brazil.

SMART Global’s second step occurred on October 19, 2020, when it announced the acquisition of Cree LED Products business, a manufacturer of LED chips and LED components, for a consideration that could total $300 million. The transaction, which should close in calendar 1Q21, is anticipated to be immediately accretive to gross margin, Adj. EBITDA, Adj. EPS and free cash flow, providing the company with an entrée into an $11 billion market. SMART Global will pay Cree $50 million on closing and an additional $125 million in a seller financed note at LIBOR plus 3 points payable interest only until the principal is due August 2023. Cree is also eligible to receive up to $125 million in an earn-out payment contingent on its performance in the 12 months post-transaction close.

Cree earned gross profit of $91 million on revenue of $433 million in FY20 and will be SMART Global’s fourth operating segment, comprising 28% of its top line (on a pro forma basis) while Brazil’s contribution shrinks from 35% to 25%. 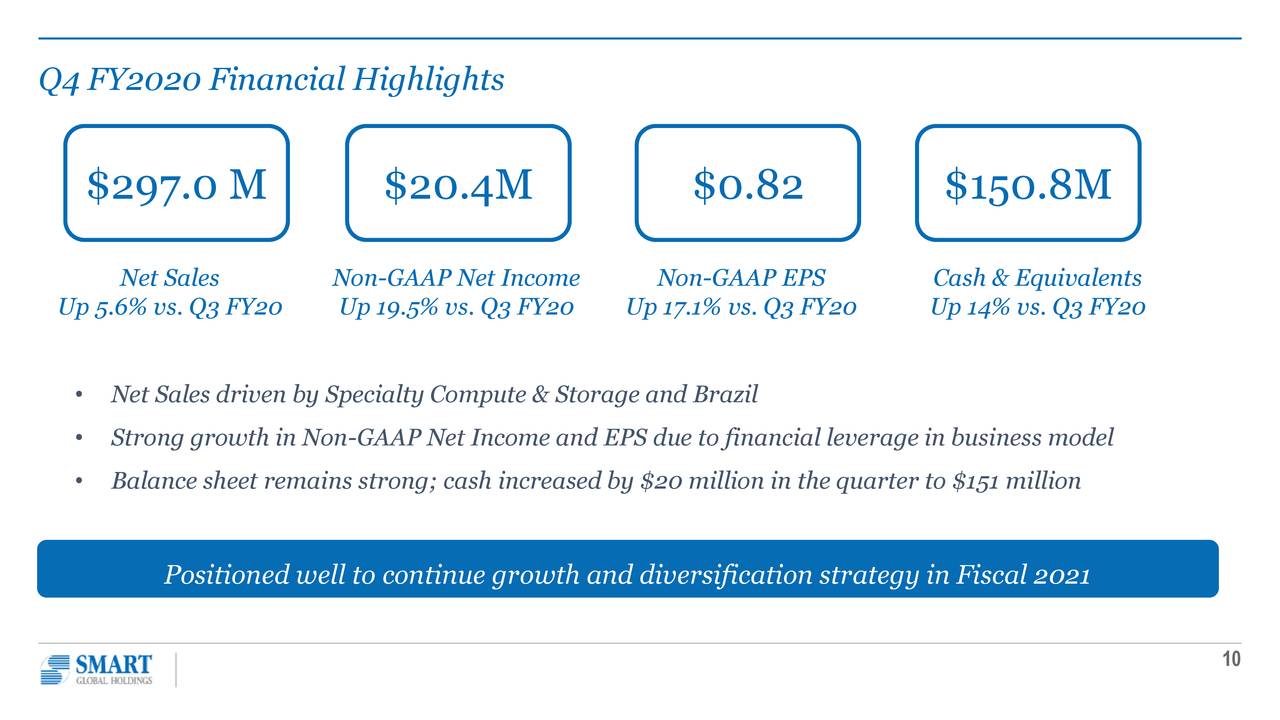 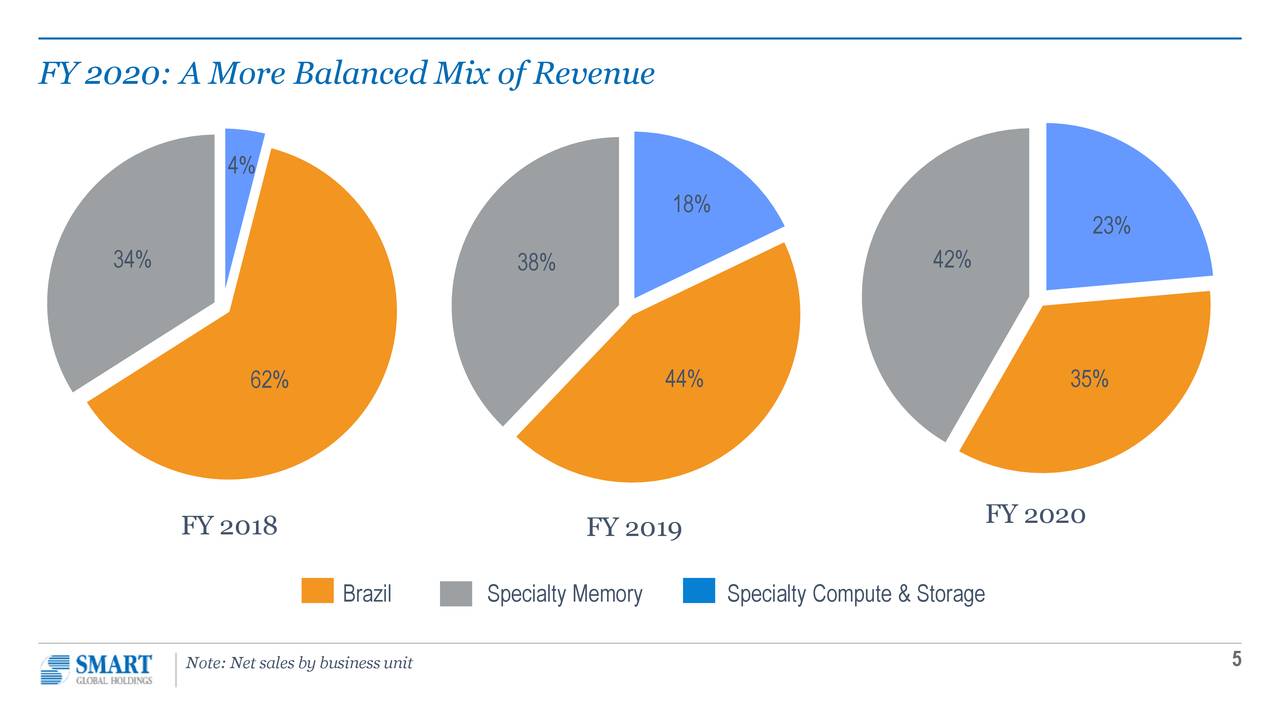 Management did not provide full-year projections, rather guiding investors to 1QFY21 Adj. EPS of $0.70 on net sales of $290 million (based on range midpoints), which, if achieved, would represent 21% and 6% increases over 1QFY20, respectively. 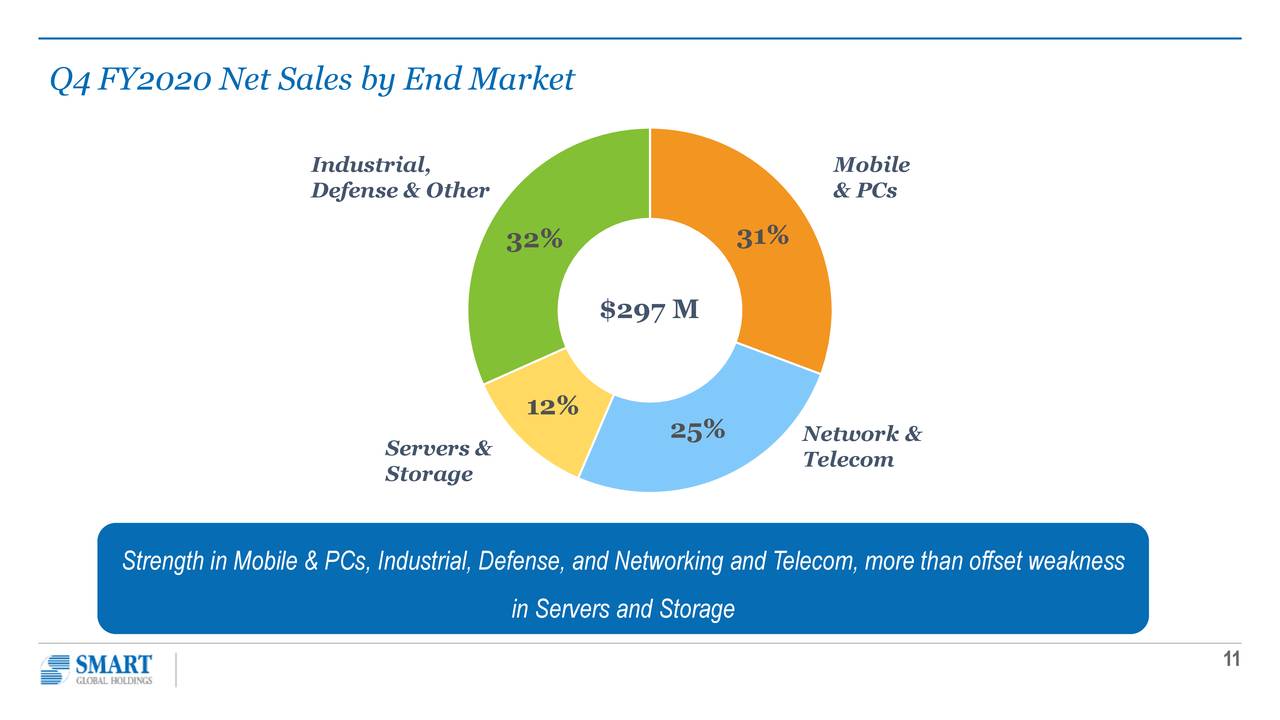 SMART Global exited FY20 with $150.8 million in cash and equivalents and $195.6 million of long-term debt. Both metrics will be impacted upon the closing of the Cree deal. The company does not pay a dividend, nor does it have a share repurchase program authorized. 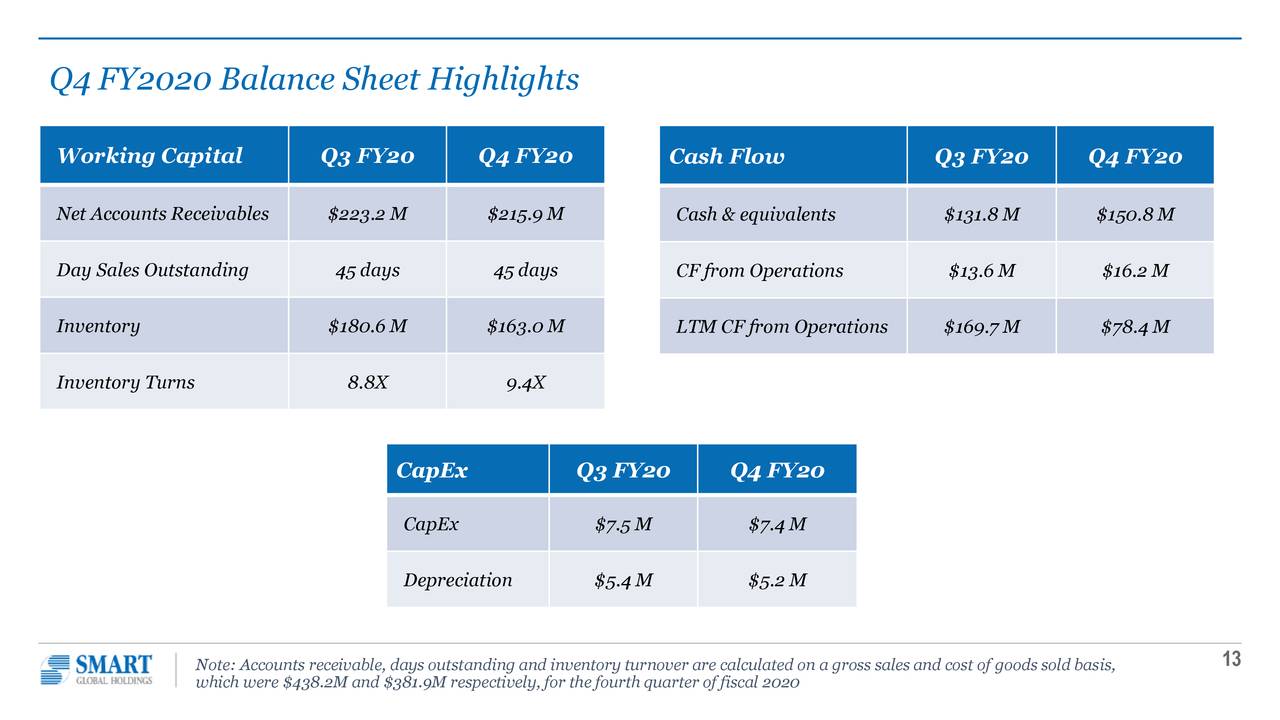 The opinions of Street analysts are tilted positive with five buy and two hold ratings. Their median 12-month price target is just over $36. Collectively, they are looking for SMART Global to earn $3.22 on revenue of $1.2 billion in FY21, closely resembling its performance in FY19. Needham assigned a new Buy rating on the stock with a $39.00 price target on November 12th and was the last analyst firm to chime in on SGH.

The opinion of CEO Mark Adams is decidedly bullish, as he invested ~$255,000 into SGH shares at just a shade under $26 after the announcement of the Cree deal on October 23, 2020. It was the first insider buying in this name since it came public in 2017.

READ ALSO  Service industry delivers growth on back of IT, financial sector

SMART Global was a high-flyer out of the IPO gate, trading briefly over $50 a share in the spring of 2018, before the WTO ruling was rendered. It slumped below $20 in June 2019, just before the acquisitions of Artesyn Embedded Computing and Inforce Computing, as well as the implementation of the new point system subsidy in Brazil. Shares of SGH nearly reached $40 in early 2020 before the pandemic slammed them back briefly below $20. Since May, they have been rangebound, mostly in the mid-to high 20s.

Curiously, the market hardly reacted to the Cree news at first, a deal whose total consideration is nearly half the current market cap of SMART Global. It’s a business that achieved 21% gross margin in FY20, for which the company is paying .69x FY20 revenue – if the maximum earn-out is achieved. Given the company’s success leveraging its operating system for past acquisitions – when it bettered Penguin’s gross margins by 400 basis points in year 1; improved Artesyn’s gross margins by 570 basis points in year 1; and grew revenue at Inforce by 50% in year 1 – the already accretive Cree deal would appear to have upside.

Investors seem to be waking up to the benefits of the Cree transaction in the last month as the stock has had a good rally as has the overall market. Trading at under 11 FY21E EPS, it appears the investment community does not fully value the acquisition nor the company’s big pivot away from Brazil since FY18 quite yet.

I still like SGH for at least a watch item position and purchased a few hundred shares for my personal accounts last month.

Note: This investment thesis was originally presented exclusively to Insiders Forum members one month ago when the stock was trading 25% below current levels. We have updated the research to account for all relevant events over the past month.

Bret Jensen is the Founder of and authors articles for the Biotech Forum, Busted IPO Forum, and Insiders Forum.

Author’s note: I present an update my best small and mid-cap stock ideas that insiders are buying only to subscribers of my exclusive marketplace, The Insiders Forum. Our model portfolio has more than doubled the performance of the Russell 2000 since its launch. Membership also includes our lucrative “option play of the week” feature. Join our community today by clicking on our logo below!

Disclosure: I am/we are long SGH. I wrote this article myself, and it expresses my own opinions. I am not receiving compensation for it (other than from Seeking Alpha). I have no business relationship with any company whose stock is mentioned in this article.