A Singaporean businessman with multiple ties to Wirecard has been charged with falsification of accounts, marking the first set of charges issued by the city-state since it kicked off an investigation into the collapsed German payments company last year.

R Shanmugaratnam is suspected of being a key figure in an alleged multiyear fraud, accused of playing the role of trustee for fake bank accounts, which Wirecard told auditors were filled with cash.

Wirecard collapsed into insolvency in June after it admitted that €1.9bn of cash in so-called trustee accounts probably did “not exist”. The downfall of a company once regarded as a European tech champion was the first failure of a member of Germany’s prestigious Dax index.

Singapore police’s commercial affairs department last month charged Mr Shanmugaratnam with falsifying “wilfully and with intent to defraud” letters to Wirecard saying that his company, Citadelle Corporate Services, was holding hundreds of millions of euros in escrow accounts “when in fact [they] did not hold such balance”, according to charge sheets.

Mr Shanmugaratnam, a Singaporean, was accused of forging three letters in March 2016 and one a year later, claiming Citadelle was holding a total of €321m in three separate escrow accounts.

If convicted, Mr Shanmugaratnam could face up to 10 years in prison and a fine for each of the four charges. He has posted bail of S$150,000 (US$109,000) and his case will be heard on August 20 at Singapore’s state courts.

In early July Singaporean police and the Monetary Authority of Singapore, the country’s de facto central bank, kicked off a joint probe into Citadelle as well as Senjo Group and its subsidiaries for suspected “falsification of accounts” and “carrying on a trust business without a licence”. 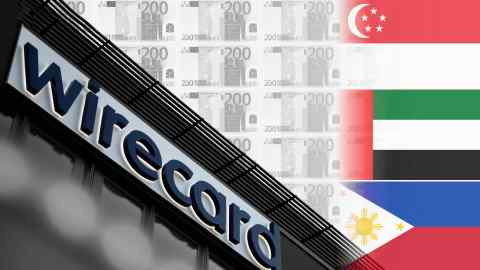 A web of business connections ties Citadelle to Wirecard, as well as two corporate suspects named in a Singapore criminal probe that kicked off in 2019, and to Senjo, where Mr Shanmugaratnam served as director from its incorporation in September 2015 to November 2016.

Senjo was among three partner businesses that at one point accounted for almost all of the reported profits of Wirecard, which claimed to outsource payments processing to the three companies. After the fake cash balances were revealed, Wirecard said it was examining “whether, in which manner and to what extent such business has actually been conducted for the benefit of the company”.

Citadelle also emerged in the aftermath of Wirecard’s highly controversial 2015 acquisition of an Indian payments group for €326m, just weeks after it changed hands for €36m. According to KPMG’s special audit of Wirecard that began late last year, Mr Shanmugaratnam acted as secretary for a travel business that was carved out of the company, which was acquired by Wirecard.

Video: Wirecard and the missing €1.9bn: my story

Wirecard told auditors that €1bn of cash resulting from arrangements with Senjo and two other partners from 2016 to 2018 was held in escrow accounts managed by Citadelle. According to Wirecard, the corporate services firm resigned as a trustee about the time that the KPMG special audit of the payments group began.

According to the appendix of the KPMG report, between 2016 and 2018 Wirecard’s auditor EY relied on documents provided by Citadelle as confirmation that Singapore’s OCBC Bank held up to €1bn on behalf of the payments group — rather than checking directly with the lender.

For instance, in a confirmation dated April 12 2019, Citadelle purportedly confirmed that €1bn of Wirecard cash was held on four accounts at OCBC.

In June this year when EY asked Citadelle to reconfirm the existence of these funds, it was told that the Singapore firm did not provide escrow services to Wirecard after March 2017, according to a document seen by the Financial Times.

However, in December 2018 Citadelle as a trustee transferred €50m in cash to a Wirecard group account with the reference “Trustee Account Payment According to Advice”, according to EY’s 2019 audit opinion on Wirecard, which was seen by the FT.

Reached by telephone earlier this year, Mr Shanmugaratnam — who has served as a director or secretary at about 400 companies in the city-state — appeared to reject the suggestion that Citadelle was Wirecard’s trustee. “Nothing to do,” he said, before making it clear he did not wish to comment further.

A person briefed on the details has said Wirecard has no banking relationship with OCBC and that Citadelle does not have an escrow account with the bank. OCBC declined to comment.