Gold and silver prices continued to shine over the past week as gold was flirting with the $1900 level, and silver broke out to the upside in spectacular fashion. Aside from the unprecedented levels of liquidity from central banks and programs from governments worldwide, the US dollar index fell below its technical support level.

The stimulus, rising deficits, and falling value of the world’s reserve currency create a potent bullish cocktail for gold and silver, the two oldest means of exchange. While central banks hold gold as an integral part of their foreign currency reserves, silver has a long history as a financial metal. Gold broke above its level of technical resistance at the 2016 high back in June 2019. Silver took fourteen months and a scare on the downside to achieve the same feat.

Precious metals prices are moving higher, and the Aberdeen Standard Physical Precious Metals Basket Shares ETF product (GLTR) holds a diversified portfolio with an over 83% exposure to gold and silver and the balance invested in palladium and platinum.

Silver breaks out- for real

In an article for Seeking Alpha on July 13, I suggested that silver was preparing for an “epic move.” On that day, the September futures contract settled at $19.45 per ounce. The price level was still $1.645 below silver’s critical technical resistance level at the July 2016 level of $21.095 per ounce.

The daily chart shows that on July 21, the price surpassed that level and kept going on the upside, reaching a high of $23.67 on July 23. The open interest metric that measures the total number of open long and short positions in the silver futures market has been gently rising with the price. Increasing open interest and higher prices are typically a technical validation of a bullish trend in a futures market. Price momentum and relative strength indicators had risen into overbought territory at the end of last week. Daily historical volatility rose from just over 23% on July 13 to 49.9% two weeks later on July 24.

The monthly chart illustrates that silver reached its highest price since September 2013. The next technical target on the upside is the August 2013 high at $25.12 per ounce.

Gold had been the leader on the upside over the past year, as its rise has been slow and steady. While silver experienced a bout of intense selling that caused the price to fall to the lowest level since 2009 at $11.74 in March, gold only reached $1450.90. The low in gold was above its breakout level at the July 2016 high at $1377.50.

Gold was trading at the $1900 level at the end of last week. Gold continues to make strides on the upside, but the yellow metal handed the bullish baton to the silver market.

When silver fell to its low in mid-March, the silver-gold ratio rose to its highest level in modern history at almost 124 ounces of silver value in each ounce of gold value.

As the chart of the price of August gold futures divided by September silver futures shows, the ratio dropped to the 82.71:1 level at the end of last week.

The quarterly chart shows that the long-term midpoint for the ratio is somewhere around 55-60:1. It has already dropped over 40 points and could be heading back to the levels not seen since 2011 when it found a bottom at 38:1.

Historically, the ratio tends to fall during bull market periods in the gold and silver futures markets. It reached a low in 1979/1980 when silver traded over $50 per ounce, and in 2011 when silver rallied to a high of $49.82 per ounce. In both years, gold hit record high levels.

It is always a challenge to pick tops and bottoms in markets. When it comes to gold and silver, the current trends are bullish, and the trend is always the best friend of traders and knowledgeable investors.

The monetary and fiscal stimulus from the central banks and governments around the globe have pushed interest rates to the lowest levels in history. The amount of liquidity is far higher than during the 2008 global financial crisis. From July through September 2008, the US Treasury borrowed a total of $530 billion to fund the stimulus. In May, the borrowing totaled $3 trillion. With Federal enhanced unemployment benefits running out this week, the Treasury will be borrowing more. Interest rates are not going up any time soon.

Moreover, the decline in US rates eliminated the bullish case for the US dollar. The interest rate differential between the dollar and the euro currency declined to only 50 basis points from almost 3% last year.

The weekly chart shows that the dollar index fell below its critical level of technical support at the March 2020 low of 94.61 last week. The breakdown of the dollar is a function of the decline in the interest rate differential along with the uncertainty over the upcoming Presidential election in the US. The US has become ground zero for the global pandemic. At the same time, the political division that has caused violent outbursts in cities across the nation is weighing on the value of the US currency. The dollar is still the reserve currency in the world and the pricing mechanism for most commodities. When it comes to gold and silver, a falling dollar is typically bullish for the prices of the precious metals.

Gold and silver prices took off last week. Gold is approaching an all-time high, and silver is leading the way as the price has nearly doubled over the past four months. Platinum and palladium prices have also been moving higher over the last sessions. 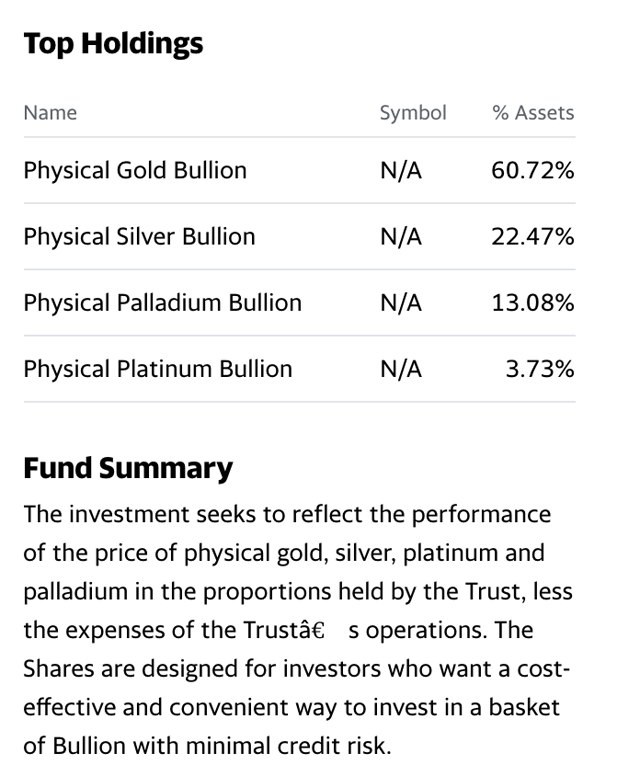 GLTR has an 83.19% exposure to gold and silver, with the rest of the product invested in palladium and platinum. GLTR holds the physical metal and has net assets of $556.26 million. The ETF trades an average of 29,998 shares each day and charges a 0.60% expense ratio. 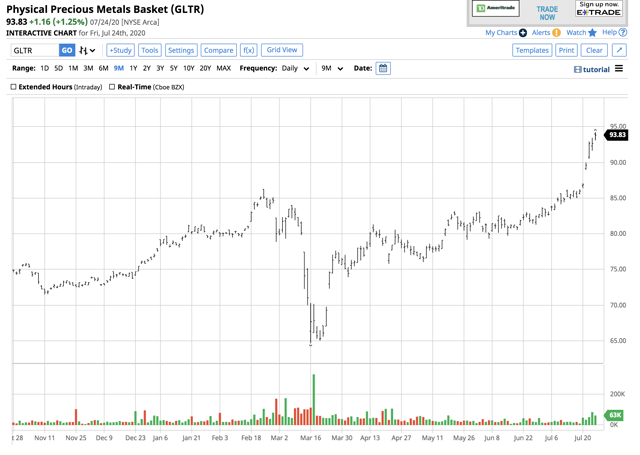 If this bull market has legs to the upside, GLTR could be an excellent addition to your portfolio.

The author is long gold, silver, and platinum