The Q3 earnings season for the Gold Miners Index (GDX) has finally begun at the same time as the Australian gold producers are busy reporting their fiscal Q1 2021 results. Silver Lake Resources (OTCPK:SVLKF) is one of the first names to release its results, and the company had a decent start to Q1 and remains well on track to meet annual sales guidance. While production slipped considerably on a sequential basis at Mount Monger, Deflector had an exceptional quarter with gold-equivalent ounce (GEO) production coming in just below the record set in fiscal Q4 2020. Given that Silver Lake is valued at below US$200.00/oz and Tier-1 producers have recently been acquired for 20% above this level (US$235.00/oz plus), I would view any weakness below A$2.10 as a low-risk buying opportunity. 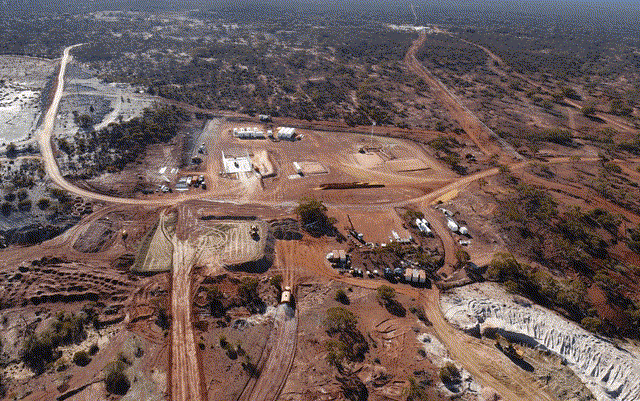 Silver Lake released its fiscal Q1 results last week and reported quarterly production of 63,600 GEOs, up 7% from the year-ago period. The improved results were driven by 12% higher production at its high-grade Deflector Mine, offset by slightly lower production at its flagship Mount Monger Operations. Meanwhile, the higher gold (GLD) price led to a dramatic increase in cash and bullion, with Silver Lake ending the period with the strongest balance sheet among ASX-listed gold producers of $303 million. Given the fortress-like balance sheet with no debt, it’s possible that Silver Lake could explore M&A later this year if any opportunities arise. Let’s take a closer look at the quarter below:

Beginning with Silver Lake’s largest contributor to output, Mount Monger, the company had a decent quarter, though it didn’t appear that way from a headline standpoint. Mount Monger gold production came in at 34,600~ ounces, down 4% year over year, and down sharply from fiscal Q4 2021 levels (42,000~ ounces). However, this was largely expected given that the company completed mining at the higher-grade Harry’s Hill and French Kiss pits that provided exceptional open-pit grades during most of FY2020. For FY2021, Silver Lake is focused on the relatively lower grade Karonie South Pit, and the focus of fiscal Q1 was waste stripping, while underground operations saw slightly lower grades as well due to mine sequencing.

READ ALSO  Battery life: the race to find a storage solution for a green energy future 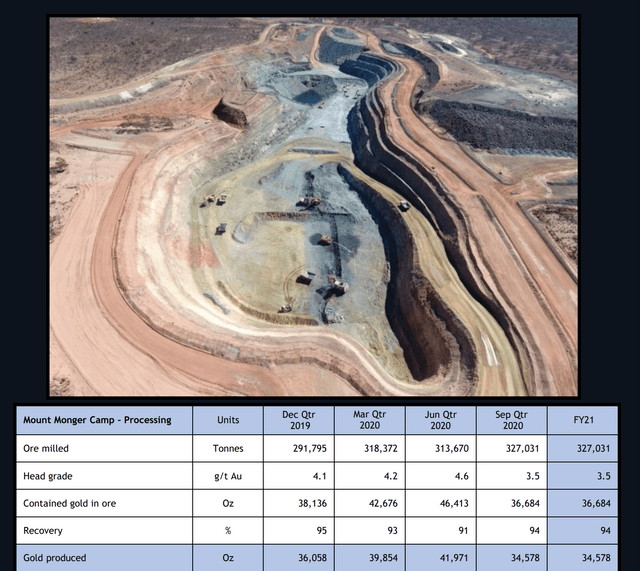 The increased development in fiscal Q1 with development commencing at Easter Hollows and stripping at Karonie South led to a higher-cost quarter with all-in sustaining costs coming in at 1,682/oz (US$1,194/oz) vs. $1,338/oz (US$950/oz) in the year-ago period. From a throughput standpoint, we saw 327,000 tonnes processed at 3.50 grams per tonne gold vs. 292,000 tonnes at 4.1 grams per tonne gold in fiscal Q1 2020. The 12% increase in throughput was not enough to offset the large decrease in grades, but this shouldn’t concern shareholders. As noted earlier, the focus was gaining access to higher-grade zones at Karonie South, and we should see higher production from Mount Monger for the remainder of FY2021. 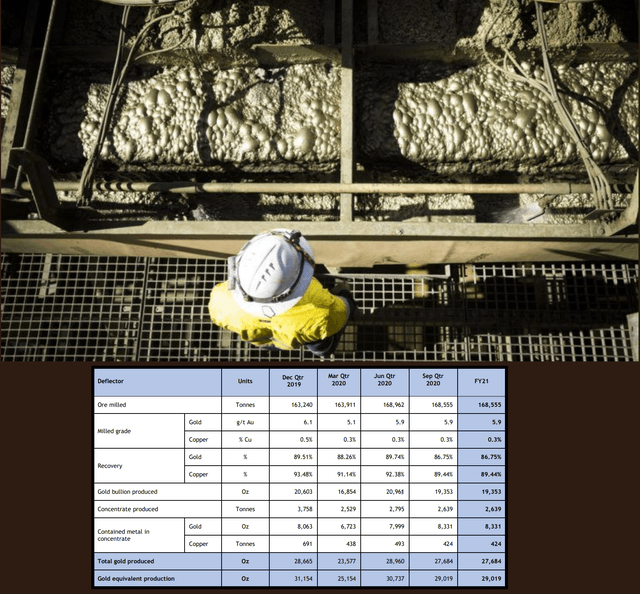 Some investors might notice that despite the higher GEO production year over year, all-in sustaining costs also increased from $1,048 to $1,071/oz. It’s important to note that this was partially due to higher royalties of $2.7 million vs. $1.4 million and higher sustaining capex of $4.6 million vs. $3.9 million. During fiscal Q1, Silver Lake completed 300 meters of underground development at Rothsay, a project acquired in the Egan Street takeover last year. The mine is expected to begin contributing ore to Deflector by fiscal Q1 2022, which will coincide with the commissioning of a carbon-in-pulp plant (CIP) at Deflector. Based on Rothsay’s bonanza-grade resource that sits at over 9.0~ grams per tonne gold, this should help to increase gold production from Deflector starting next year.

It’s easy to get discouraged by the current quarter for Silver Lake as GEO production fell by nearly 10% from fiscal Q4 levels. However, fiscal Q4 was an abnormally strong quarter for Silver Lake, and investors should have been prepared for a softer quarter given sales guidance of 245,000 gold ounces at the midpoint. As shown above, we are not likely to see any real growth in FY2021, with annual GEO sales of 263,200 ounces last year and gold sales guidance of 245,000 ounces this year. However, a year of flat to slightly lower gold sales is hardly anything to get worked up following a year of 50% production growth. Note: FY2020 sales were based on gold-equivalent ounces, while FY2021 guidance is based on only gold ounces, so the drop-off year over year is not accounting for over 1,400 tonnes of copper sales, which would leave sales roughly flat year over year.

The good news that investors should be paying attention to is the balance sheet, with cash and bullion sitting at $303 million as of quarter-end. The higher gold price combined with higher gold production year over year allowed Silver Lake to add $34 million to its balance sheet despite over $26 million in exploration and capex spent in the quarter. This places Silver Lake at the top of the pack for ASX-listed gold producers for balance sheet strength, and the company now has more than 15% of its market cap in cash. This calculation is based on Silver Lake’s market cap of $1.93~ billion and cash of $303 million.

The significance of this strengthened balance sheet is that Silver Lake can continue to do M&A, and it’s shown that it is no stranger to this growth strategy in the past. This is evidenced by the acquisition of Egan Street last year and Doray (Deflector) in the year prior. Given that Silver Lake should finish FY2021 with over $410 million in cash based on trailing-twelve-month quarterly cash increases of $37 million per quarter, investors can be comforted by the fact that a takeover could be completed without any need for share dilution. This adds to Silver Lake’s organic growth potential, which is already present without M&A due to the addition of higher-grade from Rothsay and higher-grades from Deflector South West. With a cash balance of over $400 million by next summer, the company could have its pick of several advanced-stage explorers in Australia or Canada. 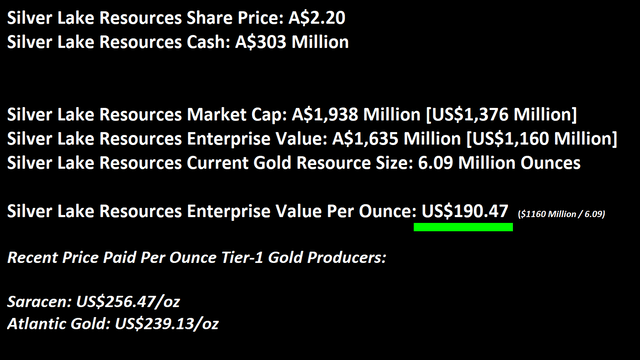 From the headlines alone, it was a mediocre quarter for Silver Lake. Still, it’s important not to lose sight of the big picture or penalize the company for a quarter that required more development than usual. However, the recent correction has left Silver Lake trading at a valuation of $190.47/oz, more than 15% below the price paid for Atlantic Gold (OTCPK:SPVEF) and Saracen in the recent merger proposal. Therefore, Silver Lake’s valuation is beginning to get enticing here. In fact, I would argue that the stock would become a potential takeover target below A$2.00. For this reason, if we do see any further weakness below A$2.10, I would view this as a low-risk buying opportunity.