The past few weeks have certainly seen their fair share of troubling headlines. From the waves of civil unrest gripping the United States and U.S./China tensions once again heating up, to the potential for a winter virus wave and ongoing fiscal debt concerns, markets have had plenty of reasons to pause. And yet, even as the risks pile up, equity markets have continued their seemingly relentless ride upwards, driven by an exceptionally powerful leadership rotation into cyclicals and value.

Markets often tend to ignore social and geopolitical events until they have a meaningful short-term economic impact. Incoming economic news has, if anything, been surprising to the upside and has likely confirmed that April marked the worst of the crisis, helping to drive the rally.

Policymakers have also recently surprised to the upside, with the ECB introducing another €600bn to its Pandemic Emergency Purchases Program, hopefully putting to bed any doubts about its willingness or ability to provide necessary stimulus. Equally, fiscal policymakers in Europe finally appear to be delivering with a proposal for risk-sharing in the form of the €750 billion EU Recovery Fund. In Asia, Japan and China have also both announced bigger-than-expected fiscal support packages.

Through all the economic optimism, the Nasdaq reached a new record high on June 9 and the S&P 500 is back in the green for the year. While tech stocks have driven much of the rally to date, with investors piling into growthy mega-caps, positioning has become crowded and valuations have become extremely stretched. Growth stocks have never been more expensive, both against their own history and relative to value stocks. These types of extremes rarely last for long, requiring only slightly better economic news to spur a reversal in style. 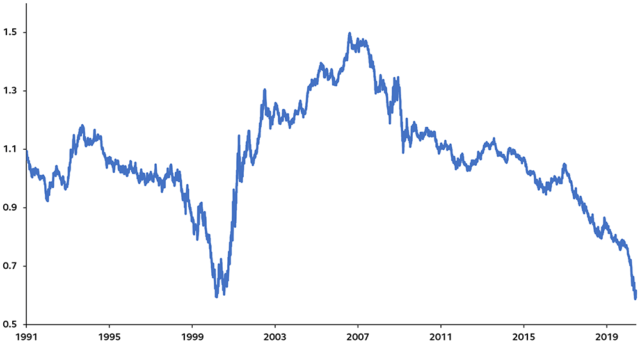 Source: Bloomberg, Principal Global Investors. Data are as of June 5, 2020.

Perhaps unsurprisingly, the last few weeks of reopenings, policy stimulus announcements and better economic data have coincided with value stocks finally outperforming growth stocks. With positioning and valuations still extreme, this rotation likely has further to run in the short term. However, we believe that a multi-year sustained rotation will hinge on a more meaningful improvement in the fundamental economic and earnings outlook; a rise in bond yields, as well as a reversal of the secular story driving the tech sector.

A meaningful improvement in the economic and earnings outlook could take time to develop given the deep hit to the economy in recent months.

Admittedly, the astounding 2.5 million increase in U.S. non-farm payrolls in May, confounding consensus expectations for a further 7.5 million fall, suggests that scarring of the U.S. economy from the crisis may be less than initially feared. Yet, even with May’s positive surprise, the unemployment rate is still extremely elevated at 13.3%. The COVID Crisis caused significant labour market dislocation and has a way to go before things are back to “normal.” 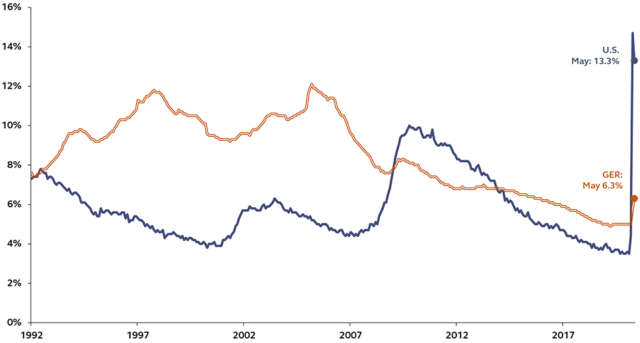 Early signals suggest that much of the rebound in U.S. jobs was driven by the Payment Protection Plan (PPP). While a positive for workers and businesses in the short term, if economic demand fails to recover quickly, companies may struggle to stay afloat once policy support is removed. This issue is also shared by European countries, where government support has limited the rise in unemployment but has not eradicated the growing threat of bankruptcies.

As a result, while the pace of earnings contraction may ease in the second half of the year, the corporate profit outlook will still be fraught with uncertainty and likely struggle to fully recover, favouring growth stocks longer term. 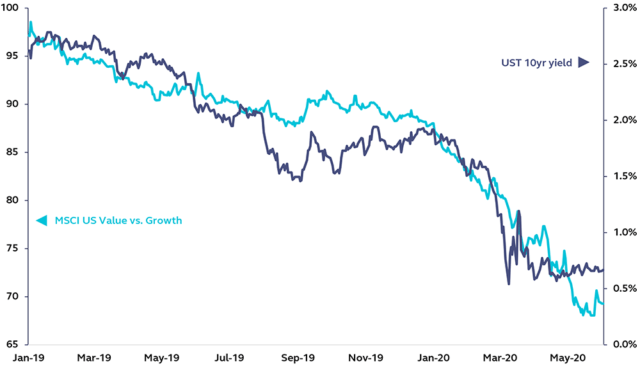 For value to mount a structural challenge to growth stocks, bond yields need to rise. Bond yields have broken out of their recent range, supporting value stocks in the near term, yet the potential for a meaningful sell-off is limited. With so much labour market slack, we do not expect to see much upward wage movement, so inflationary pressures are set to remain muted. (Consider, wage growth was even subdued when the unemployment rate was sub-4%, prior to the crisis!) Against such a weak inflationary backdrop, there will be minimal pressure on the Fed to tighten monetary policy and rates are likely locked near the zero bound for the foreseeable future.

What’s more, discussions of potential yield curve control suggest that the Fed will look to keep the yield curve low and flat. This is a strong headwind for value stocks (financials, industrials, etc.) and so, while they may get a boost as economic data improves over the next few months, it is unlikely to be lasting.

Tech to live another day

Just as value outperformance requires a strong showing by financials, growth performance is heavily dependent on tech. Following their tremendous performance over the past 10 years, tech companies have extremely expensive price tags suggesting scope for further gains is limited. Yet, there remain strong tailwinds for this sector. Not only does the uncertain environment elevate investors’ preference for companies with stronger balance sheets, positive cash flow and less leverage, but technology still enjoys a strong secular growth story. Indeed, if anything, the pandemic will accelerate a shift toward more virtual business models and reinforce company dependency on technology.

Unprecedented monetary and fiscal policy have put the global economy back on its feet. However, once the fiscal support comes to an end, countries will be left with a large debt overhang and lingering effects from high unemployment and bankruptcies. This legacy implies that, while a recovery is now underway, the healing of the global economy will likely extend over a prolonged period and subdued growth will keep interest rates depressed for years to come.

Value stocks may get an additional boost over the coming months as positioning, valuations and recovering economic activity drive better performance. However, without a strong reflationary rebound, value is unlikely to stage a more durable outperformance. The clock is ticking.

Previous PostAmazon helped the Nasdaq breach 10,000 and is still a buy, traders sayNext PostOf chainsaws and supply chains – How big beef and soya firms can stop deforestation | The Americas