Heat-not-burn is seen as the future of tobacco. Although it cannot be said to be risk-reduced, it has had an appeal that invigorated the smoking markets with younger cohorts beginning to partake. Philip Morris (PM) began this concept in Japan, where their first mover advantage has meant overwhelmingly sustainable market leadership against BAT’s (BTI) Glo, and rapid growth in overall share of the tobacco market. Onboarding people onto IQOS has incredible competitive effects, as it leads to attrition from competitor’s traditional brands (partially their own too) and establishes recurring revenue on a platform with 50% higher margins. The battle for heat-not-burn is winner-take-all, and very rewarding for the winner. We think that PM’s first mover advantage in broad global markets will bear similar fruit as their Japan foray did, and will steal a large portion of the market pie. While the rollouts in Europe and elsewhere are still in their infancy, we look to Japan to understand the extent of the potential PM lead, and the results are encouraging. Our initial thesis of the power of the first-move continues to be supported, and for that reason we continue to rate PM a buy despite its premium.

Since the launch of IQOS in Japan in 2016, we saw what the benefits of several quarters of lead can result in. Already claiming 7% of the entire Japanese tobacco market with IQOS by Q1, the situation leading up to last quarter showed a dominant Philip Morris, with IQOS alone claiming a sizable portion of the market of both traditional and alternative tobacco products. Glo grew as well, however, the IQOS lead has grown substantially since BAT’s later entry into the market. 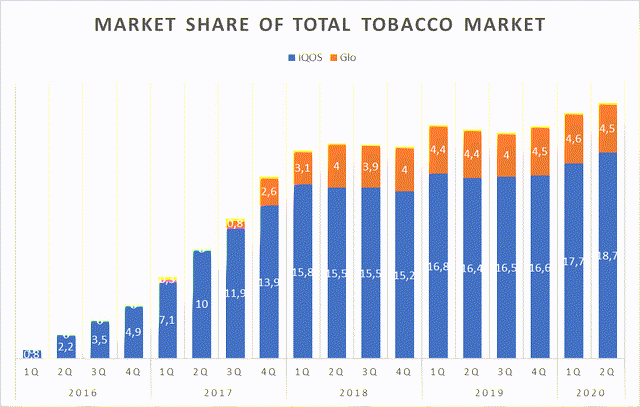 (Source: Up to Q2, Japanese Ministry of Finance)

Updating for Q3, we see further marked improvement in IQOS market share relative to Glo based on heat sticks sold. This happened in the context of overall downtrading in the market for traditional products, but growth for heat-not-burn. The share of the overall tobacco market attributable to Glo and IQOS also grew in Q3. 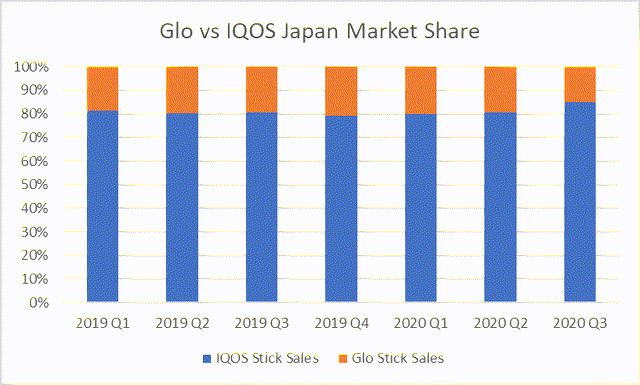 IQOS’ lead over Glo has continued to consolidate into the more recent quarters where overall heat-not-burn saw general deceleration in growth, indicating sustained popularity over Glo.

With IQOS taking an early hold in key European market like Italy, growing evidence of strong benefits for first-movers using the Japanese market as a Litmus Test bodes well for PM’s overall presence in heat-not-burn. With the fact that IQOS margins are more than 50% higher than on traditional cigarettes, consolidation of the market from competitor traditional products to IQOS in an overwhelming proportion will mean massive expansion of profit margins. Once traditional volumes stabilize a little more to their overall downtrend after the COVID-19 crisis abates, we should see a more optimistic operating profit picture that will show a more unambiguous trajectory of profit growth. Till now, mixed product results due to COVID-19 has made investor response to earnings releases tepid.

However, there are still risks. First of all, IQOS’ time lead in broad global markets is not as large as what it was for Japan, since when they were releasing into Japan, heat-not-burn was a new category. Therefore, the rollout will be more competitive. Moreover, COVID-19 lock-downs in early march has also slowed down the rollouts in some markets, giving BAT time to prepare a more robust rollout against IQOS. So results could vary from the Japan situation, although we still think that IQOS first-move in many key markets will afford it overall supremacy in heat-not-burn as its ahead-of-expectations heat stick growth rates in Q3 indicate. Indeed, the above expectations growth in heat-not burn continues to enhance the asymmetric upside skew yielded by our sophisticated model.

With limited downside risk and substantial upside, we continue to be a buyer of PM for the powerful benefits of being a first-mover in many key markets, as well as for shifting customers onto more profitable products.

Disclosure: I am/we are long MO, PM. I wrote this article myself, and it expresses my own opinions. I am not receiving compensation for it (other than from Seeking Alpha). I have no business relationship with any company whose stock is mentioned in this article.