Footwear and accessory behemoth Nike (NKE) is slated to report earnings after the bell on Tuesday. With the earnings report coming out, and the stock typically exhibiting front-running rallies into earnings in the past, now seems a good time to take a look and see if Nike is showing a pre-earnings rally, and what to do about it. 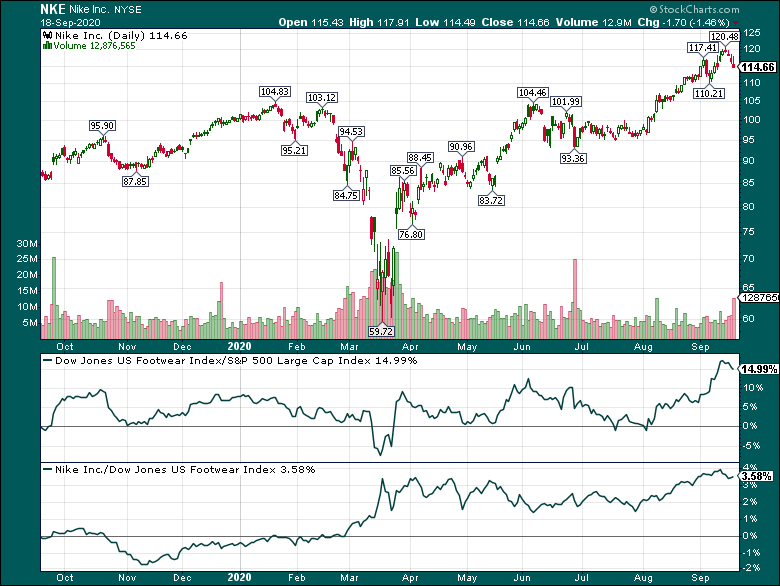 We can see that Nike has rallied hard in the past few weeks, and it has managed to outperform its benchmark nicely, which, in turn, is outperforming the broader market. Nike, then, has proven to be a market leader since the pandemic bottom, and market leaders tend to rally hard into earnings.

In this case, I think Nike has rallied into earnings and should be sold, as the risk/reward has been skewed out of favor for the bulls. To be clear, I’m not saying Nike won’t rally post-earnings. What I am saying is that given the rally we’ve already seen, the lower risk option is to take profits. This is particularly true given the broad weakness we’ve seen in growth stocks in the past couple of weeks, as Nike hasn’t participated in the selling. The balance of risk, I believe, favors the bears post-earnings.

There are, of course, many ways to measure whether a stock is overbought or oversold, or how it may behave in the coming weeks and months. One way I like to use is computing rolling returns, which I compute by summing total price returns over a certain period. This sort of analysis ignores dividends and is focused purely on price.

To kick us off, we’ll take a look at a 30-day view, which covers about a month and a half of trading activity. 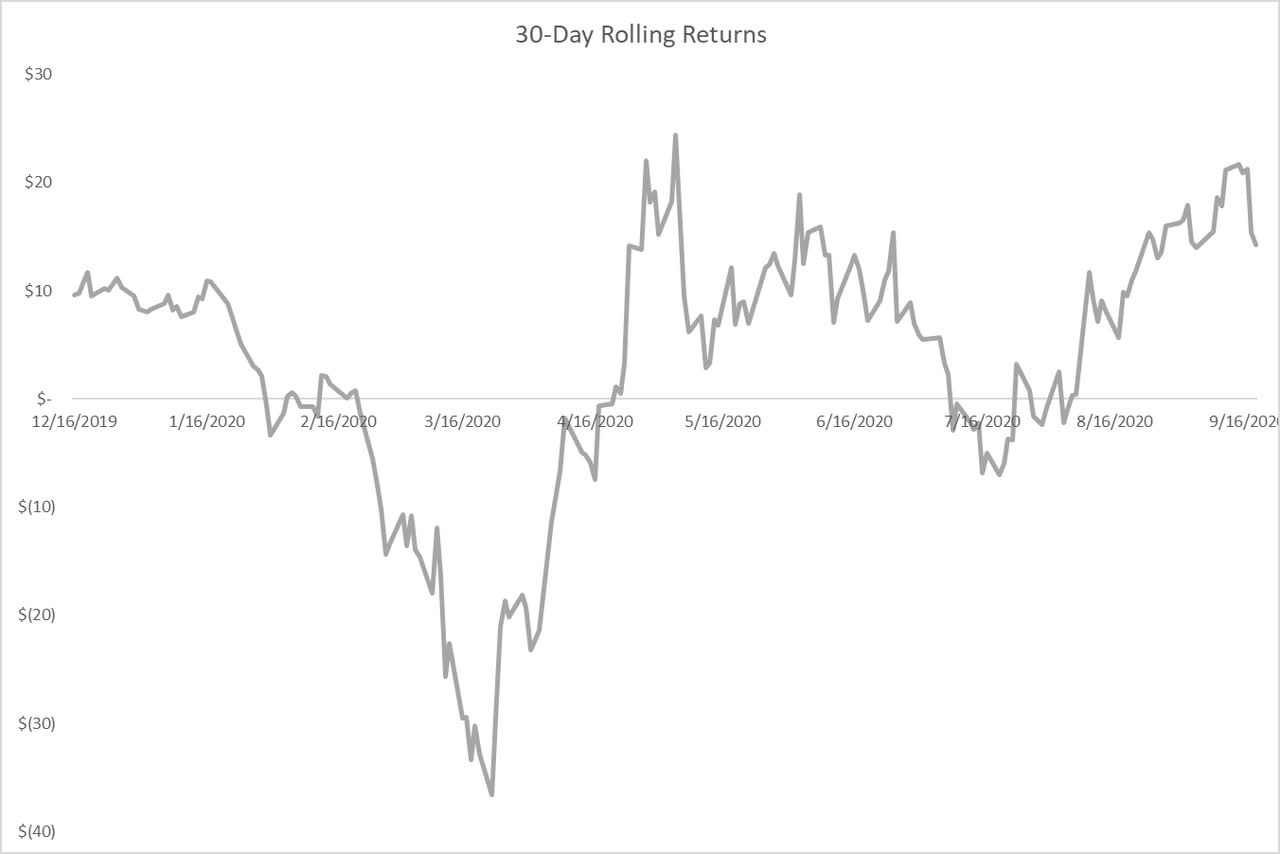 We can see that buy signals, which are generally triggered by rolling returns hitting or crossing below the zero mark, have been few and far between. You see this sort of behavior with market leaders because they tend to trend strongly higher in normal conditions. Obviously, the pandemic caused some unbelievably abnormal conditions earlier this year, but the buy signal of seeing 30-day rolling returns hit zero is generally a pretty good time to buy.

If we look at it from the perspective of earnings reports, we can see other interesting behavior. Nike’s last three earnings reports were in late December 2019, late March 2020, and late June 2020. The March earnings report can be ignored as it was during the worst bit of the pandemic selloff. Focusing on the other two, we can see that rolling returns into the reports are high, while post-earnings returns are much less so.

30-day rolling returns into the late December report hovered around $10, meaning the stock rallied into the report. Rolling returns hovered around the high single digits before moving much lower. The same measure into the June report showed robust returns, some of which was fueled by Nike coming off the bottom in March/April. Even so, the month or so ahead of the June report also saw 30-day rolling returns in the area of $10 or so, and then an immediate decline following the report.

If we look at the run up to Tuesday’s report, the buying has been even more frenzied, with 30-day rolling returns at nearly $20, even after a sizable pullback last week. By this measure, if Nike follows the script, we should see some post-earnings selling.

Now, if we zoom in and look at 10-day rolling returns, which is about two weeks of trading activity, we get some interesting data as well. 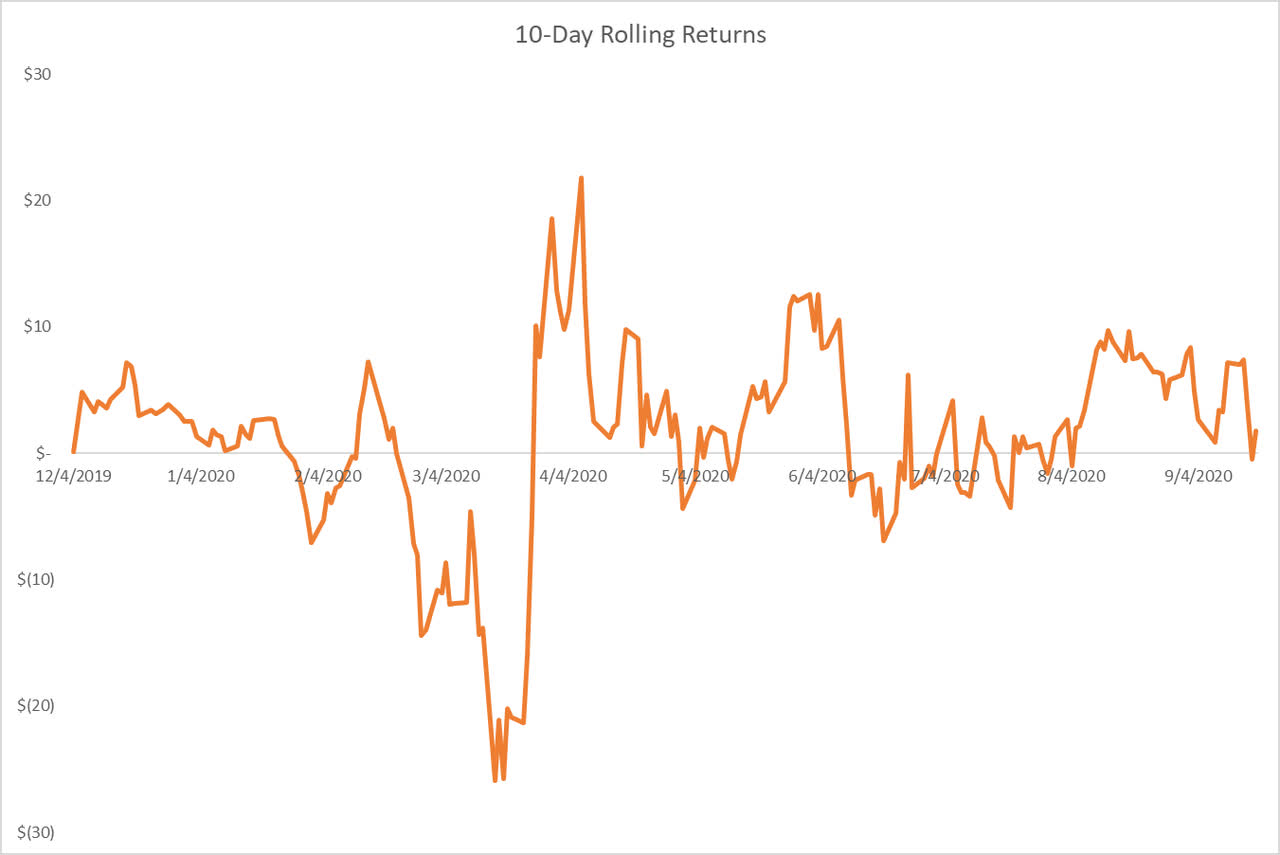 The stock flew into the December report, sporting 10-day rolling returns in the area of $5, while the June report saw sharp selling activity into the actual report. The September report seems to be following that script, as selling took hold last week and pushed 10-day rolling returns down to the zero line. It would appear to me, then, that we’re seeing a bit of a replay of the June pre-earnings rally, but given broad market weakness, particularly in growth stocks, I think Nike is more susceptible than it otherwise would be.

Putting all of this together, it appears to me that post-earnings returns will almost certainly be either underwhelming or negative.

The conclusion I draw from this data is that Nike is exhibiting pre-earnings price action that is similar to other recent earnings reports. In short, there’s a rally into the report, and then much weaker price action post-earnings. Despite the broad market weakness we’ve seen in the past couple of weeks, Nike has remained strong into its earnings report, which to me, intensifies the efficacy of this price action.

The extension of that is that if I’m right, the odds of a post-earnings pullback – or worse – should be much higher. We have a weak market for growth stocks, and a stock that hasn’t participated in the selling. Unless Nike absolutely destroys expectations and/or provides overtly bullish guidance, the odds favor the bears following the report on Tuesday.

No indicator is perfect and I certainly don’t try to paint this one as being such, but price action for Nike into and out of earnings reports has certainly rhymed with past instances, and the run into Tuesday’s report is following the script, at least in my view.

This means that if you’re bullish, I think you’ll get a better chance to buy Nike in the coming weeks, rather than chasing into earnings. If you’re already long, taking profits before the report looks prudent, as it certainly appears to me that we’ll get a post-earnings selloff.