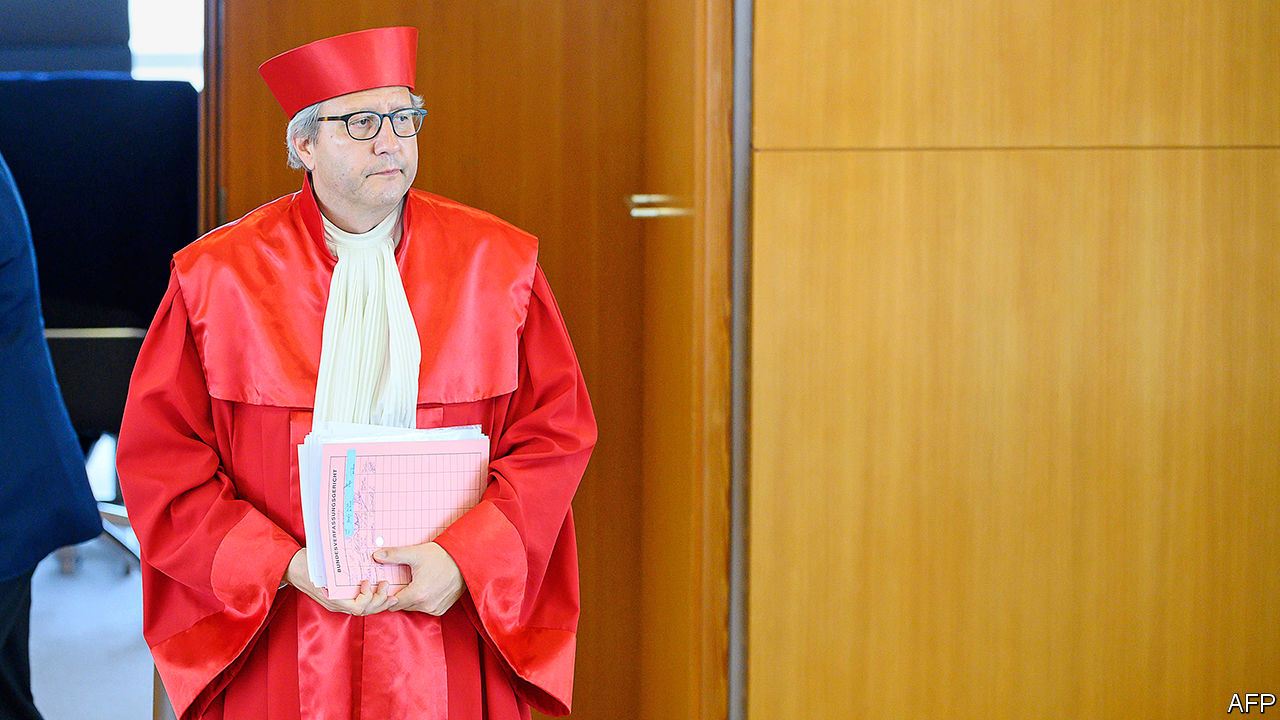 THE MAGNIFICENT scarlet robes that adorn the judges of Germany’s constitutional court trace their origins to a spot of judicial attention-seeking. Soon after the court was established in 1951, its judges decided they needed to distinguish themselves from their peers on the Federal Court of Justice, and recruited a theatrical costumier to update their look. Yet, as the judges showed on May 5th, their rulings can be even more eye-catching than their attire.

This week’s ruling took aim at the Public Sector Purchase Programme (PSPP), a quantitative-easing scheme established by the European Central Bank (ECB) in 2015. Over the years a gaggle of conservative German academics, lawyers and hangers-on have regularly visited Karlsruhe, where the court sits, to challenge the legality of the ECB’s unorthodox monetary tools. The court has issued various warnings and red lines in response. But this week it went further, ruling that the bank had not properly applied a “proportionality” test to PSPP that would have accounted for its economic side-effects, and that German politicians should have challenged it. Worse, the judges said that the European Court of Justice (ECJ), the EU’s top court, which had opined on the case at Karlsruhe’s request, had not checked the ECB’s homework properly.

It will take months or more for the ruling’s full consequences to unfold. But in the short term little will change. PSPP looks safe. Karlsruhe rejected the plaintiffs’ claims that it violates the EU ban on monetary financing of governments. Instead, it gave the ECB three months to justify its bond-buying. The bank’s battalion of lawyers can probably pass this test—though the ECB may refuse to bow to the demands of a national court, or simply hand the job to the Bundesbank, which like all euro-zone central banks purchases its own government’s debt on behalf of the ECB. The German government may also have to get involved. If all that fails the Bundesbank will have to sell holdings worth around €550bn ($593bn). But even then the PSPP would probably find a way to muddle on.

More troubling is the cloud the court has cast over all ECB actions. Next in line is its €750bn Pandemic Equity Purchase Programme (PEPP), which aims to tackle yawning bond spreads in countries like Italy walloped by covid-19. To maximise the bank’s firepower Christine Lagarde, its president, reserved for PEPP the right to relax the rules on which bonds it may buy; it need not, for example, limit its holdings to one-third of any country’s overall debt. But Karlsruhe relied on such rules in its explanation of why PSPP did not amount to monetary financing. This offers an obvious argument to the plaintiffs, who seem certain to launch a fresh legal against PEPP. And investors may start to doubt whether the ECB will implement the scheme as decisively as it otherwise might. “At some point the ECB is going to lose credibility with markets,” says Sebastian Grund, a Fulbright scholar at Harvard and former ECB economist.

Yet ultimately the ECB is just collateral damage in a long-running tussle between the German and EU courts. Karlsruhe has jabbed at the ECJ for years, in rulings covering EU treaties, extraditions and much besides. The court does recognise the ECJ as the final arbiter of EU law. But the judges also reserved the right to declare that the ECJ acted outside its legal competence by failing properly to assess the proportionality of PSPP (it dismissed the ECJ’s verdict as “not comprehensible”). Familiar to veteran Karlsruhe-watchers, this argument rests on the contention that because the EU is not a federal state, national courts may step in if they judge the ECJ to be acting outside the competences governments have granted it. But who should take precedence?

READ ALSO  "To Whom Will We Entrust The Truth Now That It No Longer Exists?"

This challenge to the EU’s supreme legal authority has not gone unnoticed elsewhere. The deputy justice minister of Poland, which has been locked in rule-of-law wrangles with the EU for years, said (tendentiously) that the Karlsruhe ruling was of “tremendous importance” to his own country’s disputes. Others speculated that a southern European court might one day rule against the ECB for failing to give due weight to employment or growth effects in its decision-making. Fearing a leaching of the EU’s legal authority, the European Commission, may in time feel obliged to open an infringement case against Germany.

Some optimists spot opportunity in crisis. For years the ECB has in vain urged the euro zone’s governments to balance its monetary firepower by doing more on the fiscal front. By highlighting the perils of forcing the ECB to shoulder the entire burden, the ruling may jolt politicians—Germans, above all—into action. The EU’s negotiations over a post-covid recovery fund offer a timely chance to conduct that debate. Yet governments have taken every opportunity to duck it in the past.

A related view is that Karlsruhe helps the EU by drawing attention to its creaking legal edifice. The judges have long sought to remove the air of stealth from rows over legal authority in the EU, says Robert Klotz, a Freiburg-based lawyer and research associate. But it is a risky path to tread. “This is about the European legal order,” says Olli Rehn, who sits on the ECB’s governing council as head of Finland’s central bank. “Not national courts, but the European Court of Justice has exclusive jurisdiction over the ECB. This is an existential question for the EU.”■