GSX Techedu, a US-listed Chinese education company, is facing an investigation by the US securities regulator following allegations from short-sellers that it faked sales.

The Beijing-based company, which listed on the New York Stock Exchange last summer, was asked by the Securities and Exchange Commission’s enforcement unit to share “certain financial and operating records” from 2017, the education group revealed in a filing on Wednesday.

The company, which runs online courses for students starting from kindergarten through the 12th grade, said it was co-operating with the SEC.

In a May report, Carson Block of Muddy Waters Research alleged that up to 80 per cent of GSX users were fake. He said he had shorted the company’s stock because “we conclude that it is a near-total fraud”. GSX denied the allegations in a statement at the time.

“If the audits are done properly it will go to zero and delist,” Mr Left said in an interview. The fact that GSX operates in the highly competitive industry of online education made it easier to spot outliers in the company’s numbers, he said. “That was a very important part of the short thesis.”

The company said on Wednesday it had “engaged third-party professional advisers to conduct an internal independent review” into the allegations raised by the short-sellers. These advisers were hired before the SEC’s probe, the company said.

GSX is the latest US-listed Chinese company to draw scrutiny after Luckin Coffee was delisted by the Nasdaq stock exchange following its disclosure that Rmb2.2bn ($322m) worth of sales last year had been “fabricated” and some costs and expenses were “substantially inflated”.

Nasdaq revised its listing requirements after the Luckin scandal. In May the Senate passed a bill that would require Chinese companies listed in the US to meet local accounting standards, although it has yet to be acted on by the House of Representatives.

These measures have not hampered US initial public offerings of Chinese companies. From the start of the year until mid-July, twice as many Chinese companies listed on the US market than the same period in 2019, raising 30 per cent more than last year. 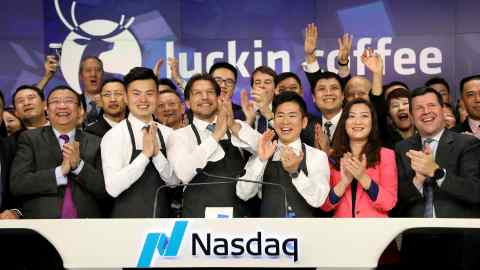 The news of the SEC investigation was disclosed alongside GSX’s second-quarter results, which showed net revenues jumped 367 per cent from a year ago to Rmb1.65bn. The company said paid course enrolments reached nearly 1.5m, driven by new enrolments and the retention of existing students.

The company’s net income rose to Rmb18.6m for the period, up 13.4 per cent from the same quarter a year ago.

In the current quarter, the company forecast revenues of between Rmb1.94bn and Rmb1.97bn.

GSX’s American depositary receipts, which were up more than 300 per cent year-to-date as of Tuesday’s close, fell 15 per cent to $80.19.