SDIV: The Crash Has Come, Don’t Expect A Rebound (NYSEARCA:SDIV)

Last November, I wrote “SDIV: Borrowing Money To Pay Dividends Is A Recipe For Disaster” which covered many of the issues with investing in companies that pay too much in dividends. In particular, the Global X SuperDividend ETF (SDIV) that invests in ultra-high dividend companies.

Since the article was written, the fund has declined by 40%. Unlike others, it remains near March lows and has only seen a slight rebound. While I certainly did not expect the fund to decline to such an extent so quickly, the fact is that SDIV’s holdings are extremely fragile. Due to their excessive dividends, most are undercapitalized and/or are in secular decline.

As you can see, the return differential between SDIV and SPY is extreme and was even growing pre-crash:

This is not to say dividends are bad, only that investors often pay too close attention to dividends and not enough to where those dividends come from. If not from operational cash flow, it is merely borrowed money being temporarily deposited into your equity account. When bad times come, those companies will inevitably be forced to dilute shareholders or go bankrupt.

Even more, many companies in a state of distress seem to try to keep their dividends high in order to dissuade investors from seeing their terminal situation (see Boeing (BA) for more on this topic). This causes many high dividend yield companies to have valuations that do not compensate for their risk.

Since I’ve covered SDIV last, its holdings have changed considerably. Its dividend yield has also risen to 13% which is encouraging investor flows. While there are certainly a few solid value picks in the fund and it looks better than it did in November, it is still best avoided.

READ ALSO  Who has been deployed on the streets of Washington?

An Updated Look at SDIV’s Holdings and Exposure

SDIV’s strategy is simple, buy the 100 highest dividend-paying equities around the world that have a high enough market capitalization. SDIV is a global fund with only around 30% of its assets located in the United States. Other countries include Australia, Britain, Russia, and China. In general, those countries have lower equity valuations and greater exposure to cyclical industries like materials and industrials.

The breakdown of its industry and geographical exposure is shown below:

As you can see, the fund is generally invested in highly cyclical industries. Most of these industries have been underperformers over the past few years, energy in particular. Personally, these industries and countries are actually solid areas for value investors to look at today as they usually have much lower valuations. However, we are in a global cash crunch and most companies in these industries are distressed. The few who are paying high dividends may be risking their financial safety.

Indeed, this is evident in the majority of SDIV’s holdings today. To demonstrate, I found financial health and valuation data on SDIV’s top 50 holdings today. See below: 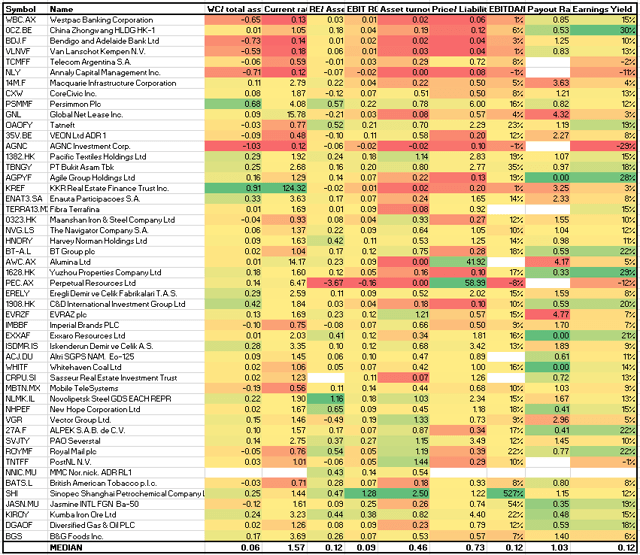 Some of these metrics don’t apply for certain industries, so I used median as opposed to average to describe the typical holding. Using median financial health data, I calculated that the ETF has an Altman Z-score around 1.53 which indicates high financial distress. Most alarming is the fact that around a quarter of the companies have negative working capital and will likely struggle with refinancing this year.

READ ALSO  Devouring Its Own: How Many On The Left Fostered The Violent Movement Now Rioting Across The Country?

Problematically, the median company is also paying slightly more than all of its EPS in dividends given its 1.03 median payout ratio. Frankly, these companies would be better off saving the cash flow in order to build a much-needed rainy day fund.

SDIV is a better investment than it was when I covered it last. The financial health of its holdings is equally alarming, but their lower valuations today help to offset that risk. Still, in times like these when companies are likely to see a few quarters of negative cash flow, those with negative working capital are at extreme risk. Consider too that the “Federal Reserve put option” argument does not apply for many of these companies as they are situated in emerging markets overseas.

Fortunately, if you’re looking for high dividends without such risks, there are many better options today, particularly compared to the ultra-low dividend environment a few months ago. While real estate is still in a risky place, the international Real Estate ETFs, SPDR Dow Jones International Real Estate ETF (RWX) and Vanguard Global ex-U.S. Real Estate ETF (VNQI), appear healthier than SDIV and both with double-digit dividend yields. Energy MLPs also have high risks, but the long-term bottom may finally be in for midstream MLP funds such as the Global X MLP ETF (MLPA) and the ALPS Alerian MLP ETF (AMLP).

Still, I believe RWX and VNQI offer the best dividend yields given risk. Further, it seems clear that SDIV is best avoided. The ETF systematically selects companies with poor financial health that are paying dividends when they should be building a safety net. The fund has consistently underperformed indices since its inception and there is no reason to believe that trend will change anytime soon.

If you’re looking for (much) more research, I run the Core-Satellite Dossier here on Seeking Alpha. The marketplace service provides an array of in-depth portfolios as well as weekly commodity and economic research reports. Additionally, we provide actionable investment and trade ideas designed to give you an edge on the crowd.

Disclosure: I am/we are short BA. I wrote this article myself, and it expresses my own opinions. I am not receiving compensation for it (other than from Seeking Alpha). I have no business relationship with any company whose stock is mentioned in this article.