Saudi oil attack to impact US gas prices, here’s what to expect

Oil prices on Monday spiked more than 14 percent following an attack on Saudi oil facilities over the weekend, and that could spell bad news for drivers.

As a result of the massive disruption, prices at the pump are likely to rise – but the extent will ultimately depend on how quickly Saudi Arabia is able to restore production, Patrick DeHaan, a senior petroleum analyst for GasBuddy, told FOX Business.

“I think it will affect gas prices, to the degree of 10 cents to 25 cents per gallon, but possibly more depending on if Saudi Arabia can’t restore the bulk of oil production in say a week or so, as they’ve led us to believe,” DeHaan said.

About half of the retail price of gasoline depends on crude prices.

DeHaan said consumers will likely notice an uptick, but it won’t compare to events such as Hurricane Katrina. A recent switch back to a cheaper winter blend of gasoline will likely help limit increases.

“There is some potential for this to get worse, but for many motorists (seeing posts on social media), there is no reason to run out to fill up,” DeHaan said, predicting prices will not surpass their previous 2019 high.

Drivers in California, however, could be hit the hardest. Nearly half of what Saudi Arabia exports to the U.S. is sent to the West Coast, as reported by Reuters. In the year that ended in June, the West Coast imported an average of about 11.4 million barrels of Saudi crude every month – much of which went to California refineries.

The Golden State already has among the highest average gasoline prices in the country – at $3.63 per gallon as of Monday.

As of Monday, the national average was about $2.56 per gallon, according to AAA. That compares with $2.84 at the same time last year.

On Monday, West Texas intermediate (WTI) crude prices experienced their largest gain since Dec. 2008 – and the highest settle since May 21.

Over the weekend, drone attacks on the heart of Saudi oil production sparked huge fires that halted Aramco production operations. More than 5 percent of the global oil supply was disrupted. 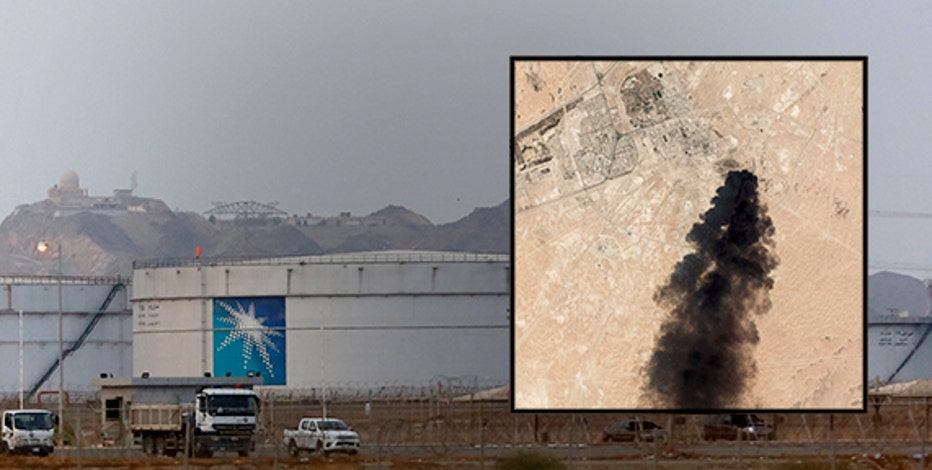 Storage tanks are seen at the North Jiddah bulk plant, an Aramco oil facility, in Jiddah, Saudi Arabia, Sunday, Sept. 15, 2019. The weekend drone attack in Buqyaq on one of the world’s largest crude oil processing plants that dramatically cut into gl

According to the Saudi Ministry of Foreign Affairs, initial investigations indicate that the weapons used in the attack were Iranian – though investigations are ongoing to determine the source of the attack.

President Trump, over the weekend, said the U.S. was “locked and loaded” to respond to the attacks. He also said the U.S. would release oil from the U.S. Strategic Petroleum Reserve, which holds about 640 million barrels of crude.