Islamabad will send its army chief to Saudi Arabia this weekend to try to resolve a growing diplomatic spat in which Riyadh is demanding Pakistan’s early repayment of a $3bn loan, according to people familiar with the matter.

The dispute between the two longtime allies is putting pressure on the fragile external finances of the government of Prime Minister Imran Khan and pushing Pakistan further into the arms of its other traditional ally, Beijing.

Riyadh has demanded Pakistan repay part of the $3bn loan and has frozen a $3.2bn oil credit facility because of a dispute over how to deal with New Delhi on Indian-administered Kashmir.

Pakistan in July was forced to repay $1bn of the loan Riyadh approved in 2018. The two sides are now locked in tough negotiations on repayment of the remainder of the debt, according to people close to the government.

“The Saudis have asked for another billion dollars to be sent back,” said the president of a private Pakistani bank.

People familiar with the matter in Islamabad said the government had resolved to send General Qamar Javed Bajwa, the army chief, to try to smooth over relations with Riyadh.

This has forced Mr Khan, who was once on such good terms with Mohammed bin Salman that he used the Saudi Crown Prince’s private jet, to rally support from other Muslim countries, including Turkey and Malaysia.

The Saudi resistance on Kashmir, with Riyadh blocking attempts to get the Mecca-based Organisation of Islamic Cooperation to comment on the issue, was motivated in part by fear of angering India, one of the kingdom’s main trading partners, analysts said.

The Saudi loan to Islamabad was originally due to be repaid in instalments later this year and in 2021, while the deferred oil payment facility was intended to support Pakistan’s external payments position.

“It seems the Saudis didn’t appreciate the persistence of the Pakistanis on Kashmir,” said Arif Rafiq, president of Vizier Consulting. “China is pretty much becoming not just Pakistan’s main option but to some extent only option.”

The dispute is threatening Pakistan’s delicate finances. The central bank has only about $12.5bn in foreign reserves representing just over three months of imports. The country has also been forced to put a $6bn IMF programme on hold while it deals with the economic fallout from the coronavirus pandemic. 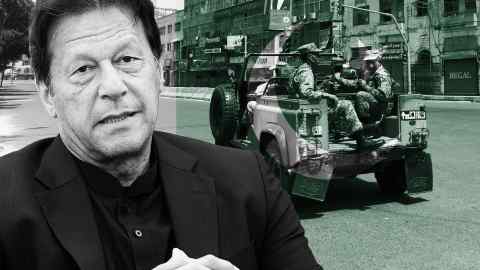 China immediately lent $1bn to Pakistan following the decision by Saudi Arabia to cut off aid and could potentially offer more, a senior government official said.

“Within hours and not days of Saudi Arabia conveying its demand to Pakistan, China offered to place $1bn with our state bank [central bank],” said a senior government official. “Beijing has proven beyond doubt that they have an ironclad commitment to Pakistan’s future, prosperity and welfare.”

The acrimonious relations between Pakistan and Saudi Arabia spilled into the open last week when Islamabad’s foreign affairs minister Shah Mehmood Qureshi issued an ultimatum to the OIC to call a ministerial meeting on Kashmir or his government would hold its own meeting of Islamic countries.

Crown Prince Mohammed bin Salman “has wanted a more balanced relationship with India, that has made the Pakistanis extremely sensitive”, said Sajjan Gohel, south Asia expert and guest teacher at the London School of Economics. “It’s a significant low for Pakistan-Saudi relations right now. The relationship is in freefall.”

The Saudi Arabian government’s media office did not respond to a request for comment.