Saturn Metals (OTC:STRUF) has had a busy year at its Apollo Hill Project in Western Australia, with over 20,000 meters drilled and several significant step-outs from its primary resource area. The company stumbled upon high-grade hanging wall lodes adjacent to the Apollo Main deposit, and has also extended mineralization at depth. This exploration success should allow Saturn to expand on its current 781,000-ounce resource significantly, and I would be surprised if the company didn’t prove up at least 1.2 million ounces of gold in the next 12 months. Despite the incredible progress made since last year, Saturn continues to trade at a deep discount to peers. Therefore, I continue to remain bullish on the stock, and I’ve raised my target price to A$1.30. All conversions are based on an Australian dollar to US dollar exchange ratio of $0.72. 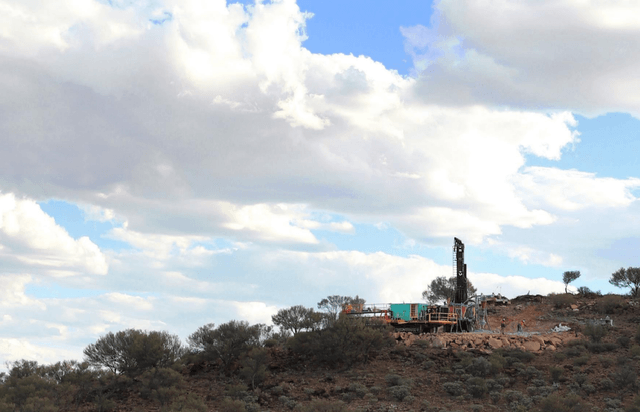 For those unfamiliar with Saturn Metals, the company is an ASX-listed gold that’s busy exploring its Apollo Hill Project, which lies 65 kilometers southeast of Leonara. Apollo Hill couldn’t have a better address, sandwiched between several million-ounce gold deposits, with St Barbara’s (OTCPK:STBMY) Gwalia Mine and Red 5’s (OTC:RFVVF) King of the Hills to the northwest, and AngloGold’s (AU) Sunrise Dam to the northeast. Saturn’s drilling to date has focused on a 3-kilometer strike at Apollo Hill, with a new satellite opportunity in Calypso if positive results continue. The project benefits from exceptional infrastructure, given its close proximity to other mines. Let’s take a closer look at the Saturn Metals story below: 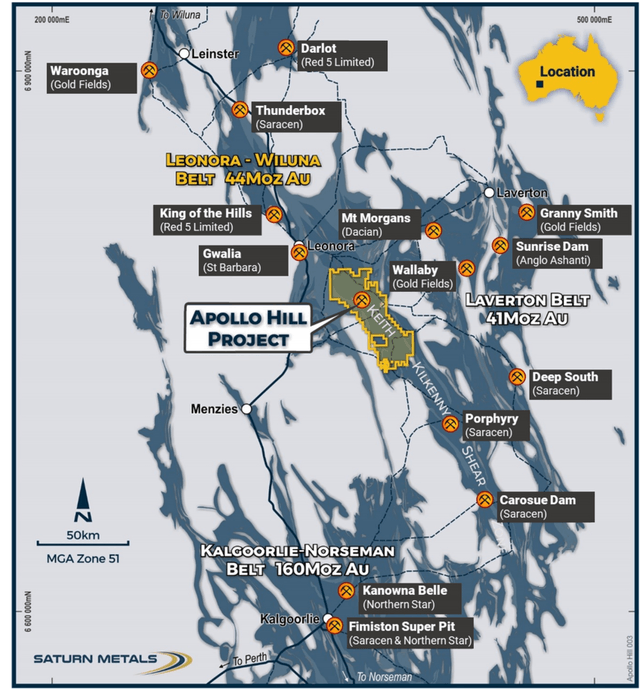 Saturn Metals announced an updated resource estimate at its Apollo Hill Project last year, with the new resource coming in at 781,000 ounces of gold at 1.0 grams per tonne gold. This was a significant improvement from the 505,000 ounces at 0.90 grams per tonne announced just 18 months prior, given that the company managed to increase the resource by over 50%, while also increasing the grade. However, since October, the continued progress has transformed Apollo Hill from a deposit that might end up being a mine to a deposit with a high likelihood of being one. This is because the recent drilling should propel Apollo Hill Main to 1.20-1.50-million-ounce status, and this is only one portion of the company’s 1000 square-kilometer property.

Over the past six months, we’ve seen several impressive holes drilled at Apollo Hill Main, and all of these holes are outside of the current resource, meaning that they will help to materially add ounces at the deposit. A few of the highlight holes are as follows:

As we can see from the results above, they drill intercepts are all well above the average grade of 1.0 grams per tonne gold at Apollo Hill Main, with the most impressive intercept being 5 meters of 32.6 grams per tonne gold in drill hole AHRC0362. This hole was drilled into the southern end of the deposit in the Apollo Hill footwall, while the other intercepts were drilled into the hanging wall zones, which lies adjacent to the main zone (October 2019 resource estimate). Not only have these results extended the deposit and increased the width materially, but they should also help to raise the average grade. To better explain why these results are so significant, we can look at the progression of the deposit below: 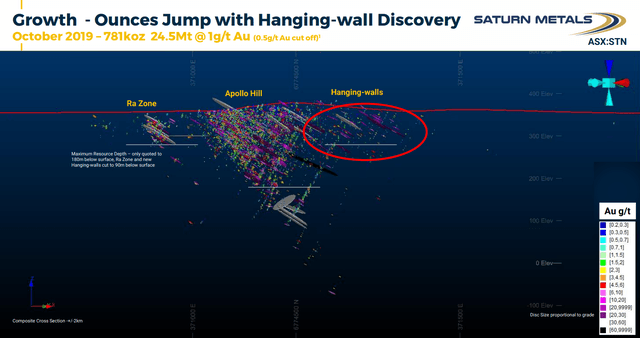 If we look at the above image, we can see that the initial Apollo Hill resource was based on a depth of just 180 meters, with the smaller Ra Zone based on mineralization only 90 meters from the surface. Meanwhile, the company had outlined the potential to increase the resource in the hanging wall zone [HWZ], which lay directly adjacent to Apollo Hill. Since October, we’ve seen several impressive intercepts to help delineate the HWZ, with the deposit now extended over a 600-meter wide corridor in the north and up to 400 meters in the south. This has increased the deposit’s dimensions to 1.7 kilometers, with widths ranging from 400 to 600 meters. However, we’ve seen the deposit extended at depth as well. Given that the deposits’ dimensions have increased both at depth and width, and we’ve seen slightly better grades in new drilling, I would expect to see at least a 50% increase in resources at the deposit. 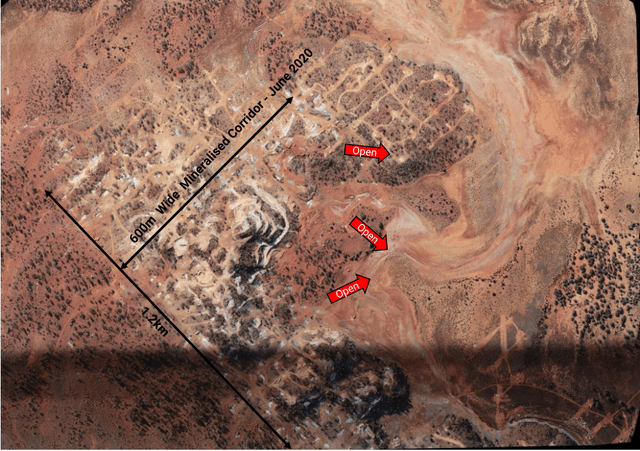 While it’s impossible to know exactly what the new resource might look like, my early estimation is for an upgrade to 1.2 million ounces of gold at 1.05 grams per tonne gold, from the current resource of 781,000 ounces at 1.0 grams per tonne gold. This would translate to a more than 50% increase in resource size and a 5% increase in grades, and would help to put Saturn on the map for a potentially mineable resource in the future. Generally, the cut-off for a mine to be worth building is at least 1 million ounces, as most mines cost at least A$100 million to build, even if they are situated in an area well-endowed with infrastructure. Therefore, this resource upgrade should propel Saturn to mineable status. In contrast, Apollo Hill was previously an exciting project, but it was too early to suggest that this had a good chance of being a mine. I would expect this to lead to a re-rating for the company and put the stock on the radar of more investors as it passes the crucial 1-million-ounce mark.

So, what’s so special about a gold junior with the potential to prove up 1.2 million ounces in Western Australia?

While it might seem like million-ounce gold juniors are a dime a dozen, gold juniors with over a million ounces are not a dime a dozen when it comes to those in Western Australia. Currently, Western Australia is the #1 ranked mining jurisdiction in the world out of over 80 total jurisdictions, and we’ve seen juniors with one million-plus ounce resources snapped up left and right by suitors to provide ore to feed their mills. Most recently, we saw Ramelius Resources (OTCPK:RMLRF) pay over A$200/oz for Spectrum Metals in Q1 for a sub-1-million-ounce resource. Besides, Apollo benefits from a gas pipeline roughly 35 kilometers away, soft ore with exceptional gold recovery rates. This means Saturn should have no problem moving to production with capex of less than A$150 million to build out its mine fully. Therefore, many factors make Saturn special relative to other open-pit projects globally, namely infrastructure, location, and metallurgy. 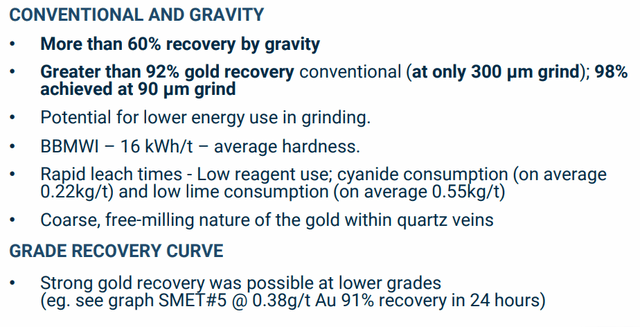 Despite these distinctions, Saturn Metals is valued at just A$72 million based on 88 million outstanding shares and a share price of A$0.82. After subtracting out its cash balance of A$5 million, the enterprise value is just A$67 million [US$48 million], a very reasonable valuation for a company on its way to proving up over 1 million ounces in the best mining jurisdiction in the world. In fact, the 4-period moving average of the price paid per ounce in acquisitions for Tier-1 explorers (US, Canada, Australia) is US$90.74/oz as of July and got as high as US$101.92/oz following the Spectrum deal. Currently, Saturn is trading at US$66.85/oz based on its current 781,000-ounce resource, and only US$40.00/oz based on my estimate for a resource upgrade to 1.2 million ounces by Q2 2021.

While it’s early to proclaim Saturn a takeover target, I believe the company is well on its path to becoming one, especially if the success at the drill bit continues. Given that it is trading at a 26% discount to the price paid per ounce based on the current resource (US$66.85 vs. US$90.74/oz), and a more than 50% discount based on what I believe the company can prove up within 12 months (US$40.00 vs. US$90.74/oz), I see the stock as a steal at current levels. It’s worth noting that this valuation does not include the recently drilled Calypso target, which, while early-stage, is very promising. This is because the initial intercepts drilled into the target are even higher-grade than Apollo Hill Main. Let’s see if the technical picture for the stock is confirming the bullish fundamental outlook:

If we look at the technical picture, we can see that Saturn broke out of a massive base earlier this year, and the stock continues to trend higher above its key weekly moving average (grey line). Based on the strong follow-through we’ve seen from the breakout at A$0.50, the stock looks like it should have no trouble heading to the next technical target of A$1.00 by year-end. As long as Saturn Metals remains above A$0.63 on a weekly close, I would consider any pullbacks to be noise and would view sharp pullbacks as buying opportunities. The fact that the fundamentals and relative undervaluation are being confirmed by impressive price action is an encouraging sign. 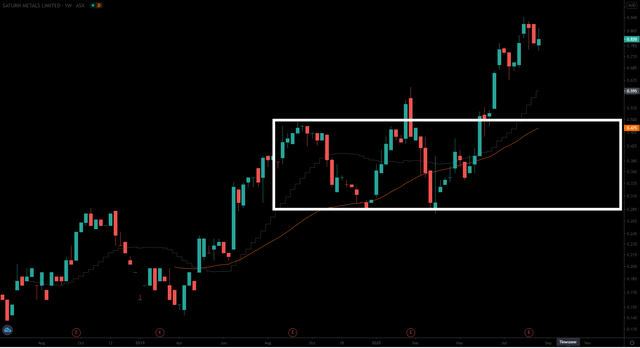 Saturn Metals continues to be a relatively under-the-radar name on the Australian Market, but I would expect it to receive more coverage if it can prove up a 1.20-1.50 million-ounce resource at Apollo Hill. Given the company’s drilling success to date, this target looks achievable within 12 months. Based on the company’s #1 ranked jurisdiction, significant potential for resource growth, and relative undervaluation compared to Tier-1 gold juniors, I am raising my target price to A$1.30. While we’re not likely to head there in a straight line, I believe any 15% pullbacks from the highs will be low-risk buying opportunities.

Disclosure: I am/we are long AU. I wrote this article myself, and it expresses my own opinions. I am not receiving compensation for it (other than from Seeking Alpha). I have no business relationship with any company whose stock is mentioned in this article.