Saskatchewan gold mines and projects typically center around the LaRonge gold belt in northern Saskatchewan or the Flin Flon Belt, which crosses over into Saskatchewan, though it primarily lies in the province to the east.

In 2018, Saskatchewan ranked 3rd out of 83 global mining jurisdictions by the Fraser Institute when it comes to investment attractiveness. Saskatchewan province does a great job of attracting investment. The question is whether they have enough high-grade gold mining prospects to warrant the investment. 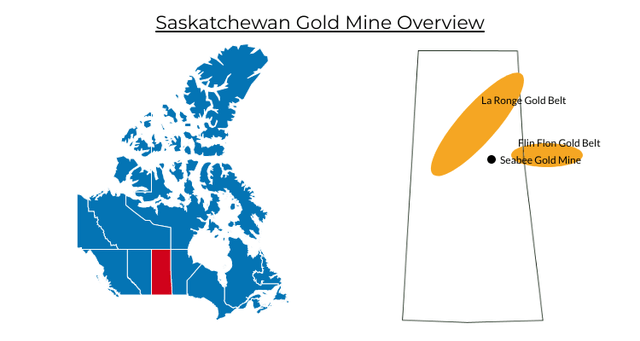 Source: Created by the author

*Reserves and resources stated in millions

Full List of Gold Mines and Projects in Saskatchewan

Comstock Metals owns the Preview SW Gold Project in Saskatchewan as their flagship project. The project is located in the heart of the La Ronge Gold Belt 40 km north of La Ronge, Saskatchewan, and 80 km southwest of SSR Mining’s Seabee gold mine.

Metallurgical testing suggests that the ore will allow 90 to 93 percent recovery. The company received encouraging drill results, and below are some of the highlights to date. The company does not appear to be actively exploring the property in 2020, or it is unclear whether they are. 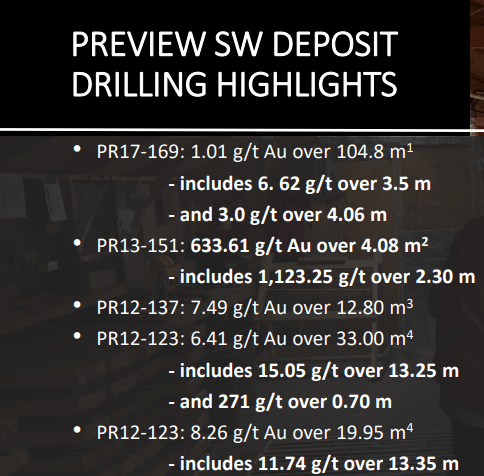 The company also owns shares in White Gold Corp. and E3 Metals from projects that the company divested to these companies in exchange for shares.

Comstock Metals trades with a market cap of $826 thousand. This happens to be less than the value of the shares the company has invested in the companies mentioned above. With no debt and $10 million in total assets (including its investments in WGC and E3M), this appears to be a bit of an arbitrage opportunity.

Their Irving and Leland projects are very near to SSR Mining’s Seabee mine and makeup 23,500 hectares. The company has optioned the Leland project to Taiga Gold for up to a 75 percent interest. The company believes these two projects exhibit the “key geological ingredients” where large high-grade gold deposits are found, such as Seabee, which makes sense. It is right down the road from the Seabee mine. 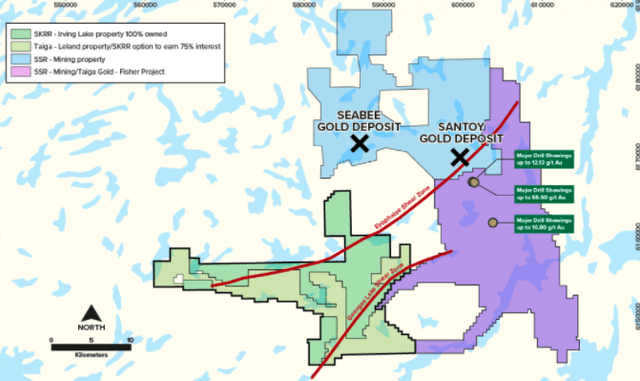 The company also has three exploration projects with the Cathro, Ithingo, and the Olson Projects. These projects are in the very early stages of exploration so there is not enough information available to write about.

SKRR Exploration currently trades with a market cap of $4.65 million.

The Seabee mine produced 112,137 ounces in 2019 at an AISC of $812 per ounce. The company originally expected gold production to reach 115,000 ounces in 2020 until Covid-19 happened. The mine was shut down for the entirety of Q2, and that probably cost the company about 30,000 tons of production alone. The mine began a phased restart in June, and I would expect the mine to have full-year production of 85,000 ounces.

For the mine to be producing near 120,000 ounces of gold per year, suggests that their $90 million investment that they’ve been making since 2017 has paid off.

The mine currently has proven and probable gold reserves of .5 million ounces. In addition, it has measured and indicated ounces of .65 million and inferred ounces of .58 ounces. Although this mine doesn’t have extremely large reserves, there is plenty of exploration left to be done on the property. During the second half of 2020, the company expects to drill underground 38,000 meters and surface drill 7,000 meters.

The Amisk Project also came with the acquisition of Claude Resources. The project contains the Amisk Gold Deposit with the past-producing Monarch Gold Mine. The project contains over 40,000 hectares of land within the Flin Flon Mineral district. The company believes there is potential for a large open-pit mine.

SSR Mining has also optioned the Fisher project from Taiga Gold, which is located directly to the southeast of the Seabee mine. The company plans to implement a 3,000-meter surface drill program at Fisher beginning in the third quarter of 2020.

SSR Mining currently trades with a market cap of $2.38 billion. The company recently approved a merger with Alacer Gold (OTCPK:ALIAF).

Taiga Gold is the owner of multiple projects in Saskatchewan, which mostly exist in the Seabee Gold Camp. The most notable project is the Fisher project, which they optioned to SSR Mining in 2016 for up to an 80 percent interest.

Here are some of the highlights from SSR Mining exploration of the property since the agreement began in 2016. 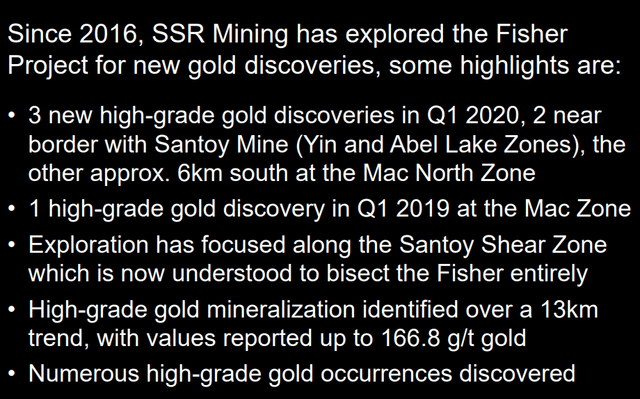 Taiga Gold has optioned the Chico Property in Saskatchewan to Aben Resources (OTCQB:ABNAF) for a chance to earn 80 percent interest in the project.

Saskatchewan has a strong, producing gold mine in the Seabee gold mine. SSR Mining just successfully implemented a $90 million investment in the facility to be able to produce 120,000 ounces per year. The company is currently exploring its existing property and the Fisher property extensively. Perhaps they are simply trying to increase reserves and resources, or perhaps they want to see if another facility upgrade is warranted. Regardless, the company has plenty of reserves for the current facility capacity.

With the Seabee mine producing gold with an AISC of around $800 per ounce, this makes Seabee an excellent investment for SSR Mining. That said, they also own the Marigold mine and the Puna mine in other jurisdictions that have relatively higher AISC. Also, the company is merging with Alacer Gold, which has operations primarily in Turkey. Although the Seabee mine is an attractive investment, I couldn’t recommend investing in SSR Mining based on their decision to merge with Alacer and the fact that there are better mines to own than the Puna and Marigold mines. SSR Mining may be worth another look after the Alacer merger takes place.

As far as the other, smaller projects in Saskatchewan, none of them are particularly attractive. Primarily, I don’t believe there is enough information in each of these projects to provide a strong investment thesis.

This concludes this review of Saskatchewan gold mines. Let me know in the comments section if I’ve left any noteworthy companies off of the list.